Pixar makes the movie that captured Andy’s imagination and ignited his Buzz Lightyear fandom in the original Toy Story with Angus MacLane’s Lightyear.

The elephant in the room that should be addressed is that Lightyear is supposed to be the movie that Andy watched prior to being gifted the Buzz Lightyear toy in Toy Story. This is the source of that merchandising and -one would assume- an immensely popular property within the Toy Story universe. Bearing that in mind, there are some issues with accepting that as the basis for telling this story. External material will tell you that this is a live-action movie within the Toy Story universe meaning that Buzz Lightyear is played by an actor and the visual effects will be a blend of practical elements with CGI. Text opening the movie states that Lightyear was released and watched by Andy in 1995. 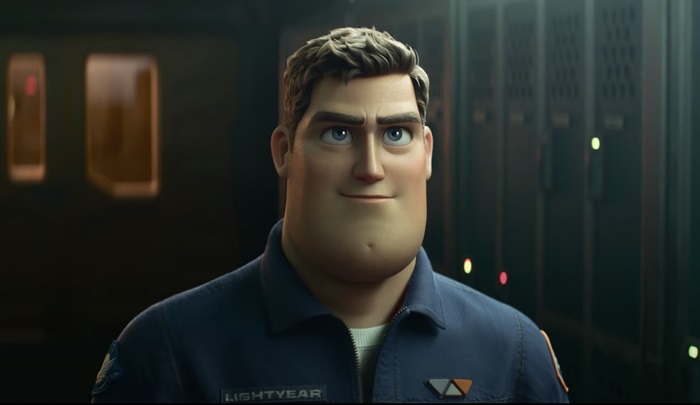 There are a few problems with this and I couldn’t quiet my mind from considering them when I was watching this. Lightyear doesn’t feel like a movie that was released in 1995, it feels like a movie that was released in 2022 unless the Toy Story universe is decades ahead of ours in things like formula storytelling, visual effects and LGBTQQIP2SAA representation. It’s not impossible as it is a universe where toys come to life but if it’s meant to reflect our world then the notion of Lightyear being a 1995 release is very difficult to accept. It might have been better served by being less Guardians of the Galaxy and more Lost in Space in terms of the template for this adventure. Of course, such an approach might be alienating to audiences who might not get the joke but it would have been a fun touch to make this an earnest recreation of a mid-90s family sci-fi movie.

Lightyear could have made use of fun visual touches such as differences in the animation style to simulate low-quality CGI blended with live-action elements, crude-looking props and other hallmarks of the era. It’s easy to see why this wasn’t done but fully leaning into the notion of the film being released in 1995 could have been fun to play with. Other considerations arise such as the lack of visible merchandising of anything outside the film other than Buzz and Zurg which suggests to me that the idea of making this an in-universe movie in the Toy Story universe was the pitch that got this film greenlit with no further consideration of it while it was being made.

Much as this was on my mind, I acknowledge that the film’s genesis doesn’t affect the quality of what was actually on screen, so the marketing inconsistencies. Lightyear as presented is a solid animated interpretation of a modern sci-fi blockbuster. It moves at a good clip, is mostly coherent in its storytelling and explores its ideas pretty well.

To Infinity…and pull my finger

The plot involves Buzz Lightyear (Chris Evans) making a mistake that maroons his crew on an inhospitable planet and being fixated on making up for his mistake by getting them home. A year after his mistake, the crew have created a makeshift society on the planet built around creating an engine that can get them home. Naturally, Buzz is the test pilot but all doesn’t go as planned as every flight has him return years after he left. Due to relativistic speeds, he travels so fast that time barely passes for him but years go by on the planet. He gets snapshots of those on the planet living their lives and growing older as he remains stuck in an endless cycle of trying to complete a mission that becomes far less relevant with each trip. A slick script means that the science of what is happening to him is clearly explained and easily digestible.

Chris Evans plays Buzz Lightyear as a less adept Captain America. He’s clearly riffing on the classic square-jawed action hero; something that does feel at home in a mid-90s sci-fi adventure. His vocal performance is excellent with the perfect mix of action hero bravado and introspective vulnerability. There’s a strong sense that Buzz is clinging to a life and mindset that no longer has a place. He’s straight-laced and earnest in the way he conducts himself and innately likeable. Everything is in service of the mission and he takes it very seriously. Details like recording mission logs even though nobody ever listens to them and sticking to a strict diet regimen establish a by-the-book attitude that limits him and stops him from accepting that the mission he is obsessed with ended long ago.

His arc is an obvious one; he has to learn that living life means accepting change and not clinging to a past that no longer applies. It’s a transition away from being inflexible and it works very well. Chris Evans subtly shifts his vocal performance over the course of the film to show Buzz having his mind opened to new possibilities. External examples of life passing him by compliment this wonderfully such as a bleak montage of life moving on for other characters as he skips years at a time not changing at all. It’s poignant and sets up what Buzz has to work through perfectly.

This is my emotional support animal!

Buzz’s final hop finds him in a less than ideal situation. The colony is besieged by killer robots controlled by the mysterious Zurg and Buzz has to figure out how to destroy the ship so that the inhabitants can escape. Helping him along the way is a scrappy group of inexperienced trainees to whom he becomes an unwitting mentor. Izzy Hawthorne (Keke Palmer) is the granddaughter of his old partner. She has a lot to learn and is afraid of space, Darby Steel (Dale Soules) is a demolitions expert working through her parole and Mo Morrison (Taika Waititi) is constantly terrified with laughably terrible aim. Rounding out his unlikely squad is a robotic feline named SOX (Peter Sohn); a swiss army knife with a tool for almost any job. It’s a fun, if typical group of characters with their dynamic progressing in expected ways. The progression is mostly earned and each achieve a resolution to their main obstacle, some more satisfying than others. They capably support Buzz’s arc and their initial lack of competence unexpectedly prompts a moving moment of introspection from him. In a film about a man examining his life choices and finding a way to move forward, they’re an appropriate group to have on his personal journey.

Lightyear is bursting with set pieces to the point that it becomes overloaded. They’re impressive, creative and make great use of the characters but, at times they interrupt intriguing character conversations or dilute the message that a given scene is trying to convey. Taking more time to slow down and let a moment breathe would have served the film far better overall rather than the quieter moments being treated as filler before getting to the next set-piece. The balance isn’t quite right and is frustrating at times.

The third act is also messy with an overreliance on exposition that is delivered far too quickly with a lack of detail to properly explain how certain events came to pass. Things move on so quickly that there isn’t enough time to let the information sink in and the escalation is uneven. The content supports Buzz’s development brilliantly but the script struggles to weave in the justification organically. It is a successful display of all roads converging in the same location and results in a mostly satisfying conclusion. 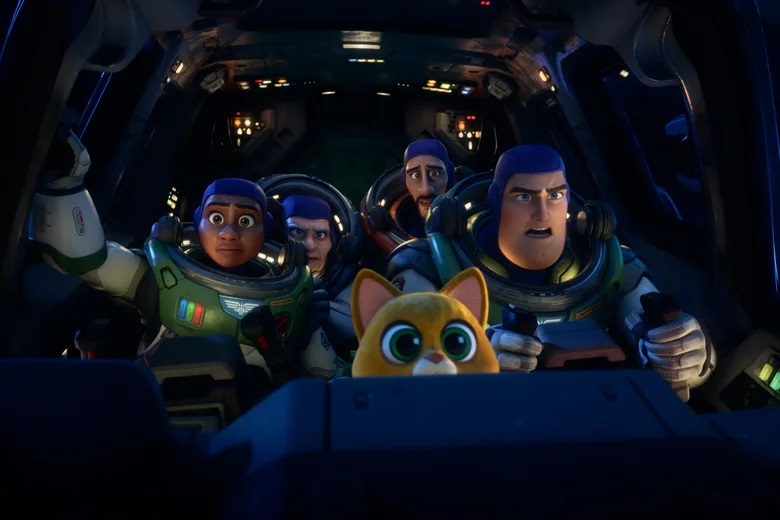 Space Rangers get it done!

A fun and creative animated sci-fi blockbuster with good characterisation, impressive visuals and moving storytelling. Chris Evans is excellent in the role of Buzz Lightyear with an easily identifiable character arc wonderfully carrying the narrative. His performance is the perfect mix of action hero bravado and introspective vulnerability and he’s consistently likeable. The supporting characters are fairly typical but work well in context and achieve a resolution to their stated weaknesses. One problem is that the film is overloaded with set pieces at the expense of more thoughtful character interactions. The third act is messy with some clumsy exposition that moves on too quickly but it does support Buzz’s development brilliantly and moves to a mostly satisfying conclusion.