For those, like me, that saw the trailer for this strange looking slice of Americana and thought, “Wow, that looks weird, and wait, was that Daniel Craig?!?!”, I headed along to see if my worst fears were going to come to pass. With that in mind, I can safely say that Logan Lucky is one of the movies I have enjoyed most in this year of surprisingly mediocre cinema. Sitting there in the multiplex you can’t help but be swept up in the weird and random nature of this part heist, part comedy film.

The basic premise of this is that Jimmy Logan, portrayed by Channing Tatum (Hail, Caesar!, 21 Jump Street) in full southern charm mode, has lost his job because of pretty unfair policies at the construction site and is generally plagued by bad luck, something that his brother claims is the family curse. He’s at the end of his tether, and with the treat of his ex-wife moving away with his daughter, and no money to hire a lawyer, he and his brother Clyde, an amputee Iraq veteran played with real slow-paced charm by Adam Driver (Star Wars: The Force Awakens, Paterson), decide to rob the NASCAR speedway track that he’s been working construction at. To achieve their goal they rope in their speed obsessed sister Melle, Riley Keough (Mad Max: Fury Road, American Honey) doing a fine job of reinventing Daisy Duke for the part. To get access to the vault they recruit a safe cracker in the bleached blond form of Daniel Craig (Spectre, The Golden Compass), having far too much fun for his own good breathing life into Joe Bang. The final members of the crew are Joe’s two redneck cousins, Fish and Sam Bang, bringing that down-home southern stereotype to our screen with considerable charm, and endearingly questionable moral logic. Craig is definitely the standout amongst this rag-tag crew, his southern drawl surprisingly on point, his comedy timing impressive, with his joy at playing such a departure from his usual fare writ large on the screen. 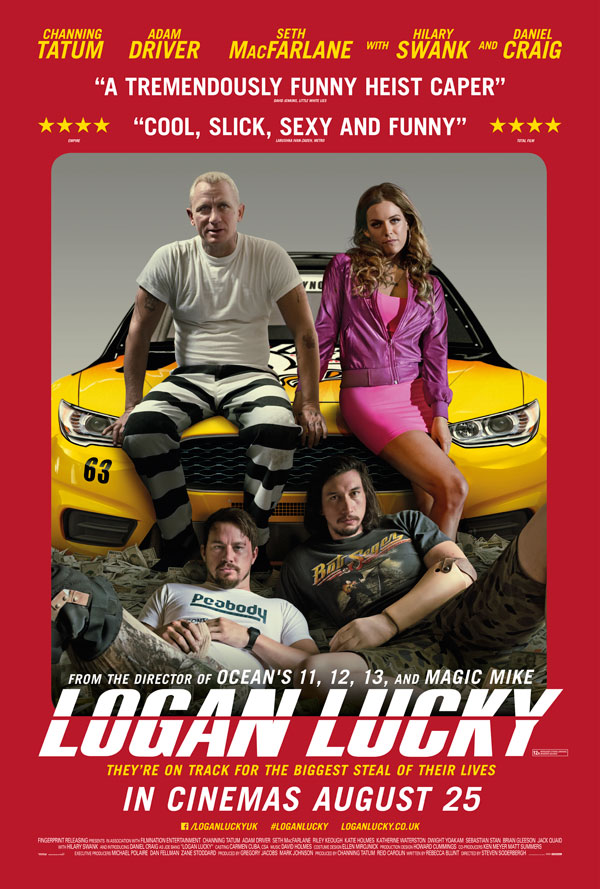 To the side of this main storyline we have subplots that take a dig at Little Ms Pageants, and corporate sponsorship and energy drinks. These come back into the mix as the film progresses, and gives us a wonderfully nostalgic structure, that brings flavours of the Cannonball Run, or the Smokey and the Bandit movies to mind.

I will admit I didn’t realise that this was a Steven Soderbergh (Ocean’s Eleven, Erin Brockovich) film when I came to it, and the veteran film-maker paints his canvas with a refreshingly light touch. For all the weight that the plot synopsis could imply, the story is very simple, and it is a heist that is played predominantly for laughs. The depth is merely there so we side for the protagonists, and not for the company being robbed. To that extent, we don’t even see a face to the victim until the end of the film, and then we are so invested that it doesn’t really seem to matter.

That is not to say there aren’t issues. The lightness to the whole thing makes it a fun distraction, and very enjoyable, but it lacks a depth that will bring you back. The cast are superb, and very likeable, but there isn’t that rat-pack chemistry that was captured with Ocean’s Eleven that makes it a bit of a modern classic, in-spite of its remake status.

There is also a bit of an issue with the part that Seth MacFarlane (Ted 2, A Million Ways to Die in the West) plays in proceedings too. The character is an objectionable head of an Energy Drink firm, Max Chilblain, who for some reason has an English accent. Obviously, there is the usual Hollywood trope on the bad guys being English, but with his company sponsoring NASCAR, and the overblown nature of it, he jars with the rest of the movie. I am usually a fan of MacFarlane, and usually enjoy his turns on screen, no matter how badly received they are by others, but I do have to admit his presence here does nothing but bring you out of this story that is so laced with Southern charm.

To sum things up, I have to recommend a trip to see Logan Lucky. It’s a movie that is slick, and oozes a charm that has been missing for a while. Yes, it is as shallow an experience as a puddle on a Los Angeles sidewalk, but sometimes that is not a bad thing. Soderbergh has served up a slice of fun cinematic distraction at a time when audiences need that distraction, and we are lucky to have films like this dropping in out laps once in a while.