An unlucky young woman finds herself in the place where good and bad luck comes from in Peggy Holmes’ Luck.

Luck is a fascinating abstract concept that impacts our daily lives constantly. Many identify positive or negative things that happen to them as being a consequence of either good or bad luck. Added to this is a plethora of superstitions around what can encourage good or bad luck through proximity to them. Such an idea is rife for high-concept exploration. Animation is fertile ground to cut loose and create an entire world based on the concept. Comparisons to Pixar’s Inside Out will inevitable be made and it’s not unfair to do so but this film is far more than a retread of that concept with emotions and memories swapped out for luck. The film is far more than that even if it does share some conceptual DNA. 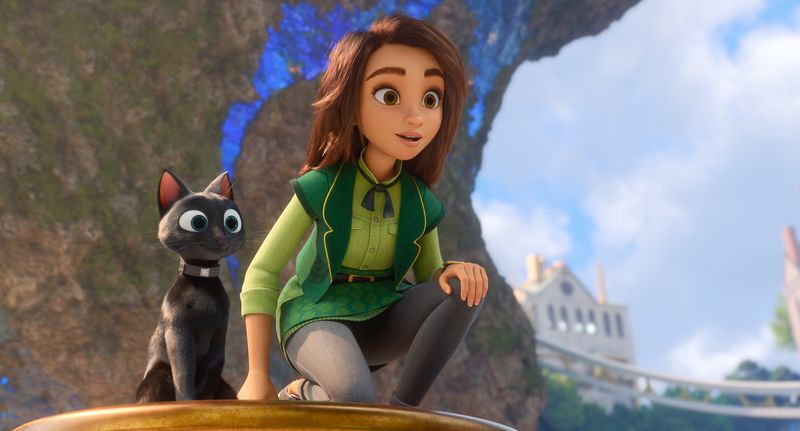 Sam (Eva Noblezada) is a contender for the unluckiest person in the world. Misfortune infects everything she does in life with many of the expected examples of rotten luck depicted in the early part of the film along with some unexpected ones. Seeing Sam try to go about her normal day-to-day life with the handicap of being so unlucky that not a single thing she does works out as it should. The overhanging question early on is how such an individual could still be alive with all she endures but Luck is a children’s film so her calamities are decidedly non-lethal.

Another thing these early scenes establish is Sam’s relentless determination. No matter what befalls her she remains committed to forging on and making the best of her comically bad situation. Her optimism and positive outlook never wavers despite external factors trying to drag her down. It’s this trait that ends up being the emotional core of the film. A very important part of her life is fellow orphan, Hazel (Adelynn Spoon); a young girl looking to be adopted by a family who can love her the way she deserves to be. Sam has aged out of the system and is now on her own at the age of 18. Doing everything she can to ensure Hazel doesn’t have to deal with that is a priority for her and it’s a goal that underpins everything the film has to offer.

Eva Noblezada’s vocal performance is excellent. Every word is filled with warmth, positivity and a charming naivety that supports Sam’s unflinching desire for a happy ending. She even gets to exercise her musical talents in an impressive song and dance number. At every point hers is a voice worth listening to and she imbues Sam with so much life. 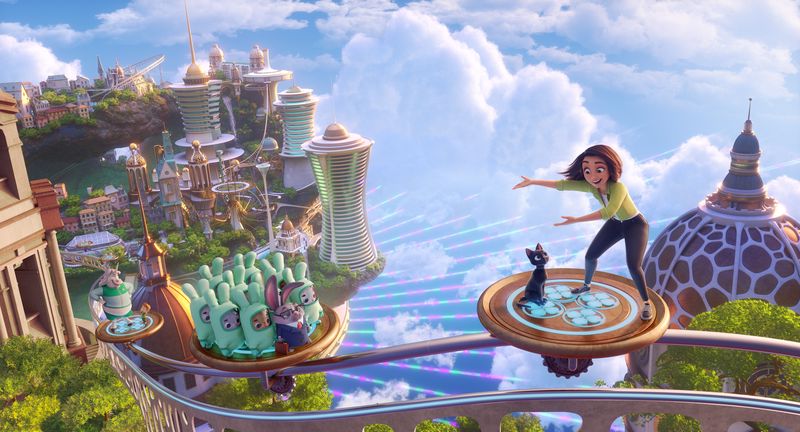 Welcome to the Land of Luck

Sam’s luck changes after she finds herself in possession of a lucky penny following an encounter with a black cat. The penny turns her life around for the brief time she has it and she gets to experience good luck for the first time in her life. Upon realising the power the penny holds her only thought is to make sure that she passes it to Hazel so that her being adopted by the visiting couple becomes a certainty.

Unfortunately, her plan is derailed when she loses the penny and finds herself in the Land of Luck where she looks to get her hands on another penny to pass to Hazel. Helping her on her quest -however reluctantly- is the aforementioned black cat, Bob (Simon Pegg); a smart-talking feline with a Scottish accent who acts as Sam’s guide on her journey through the Land of Luck. Their dynamic is nothing new but works wonderfully in context. Sam asks the questions and Bob has the answers so any imparting of information is natural as the audience is following Sam’s perspective.

The characterisation of Bob is nicely handled. He’s on the outs with his superiors and keeps others at an emotional distance. He makes it clear that the partnership with Sam is temporary and completely transactional while Sam works to get to know him. Unsurprisingly, Bob grows and develops over the course of the film. He’s well handled and Simon Pegg’s vocal performance is impressive throughout. 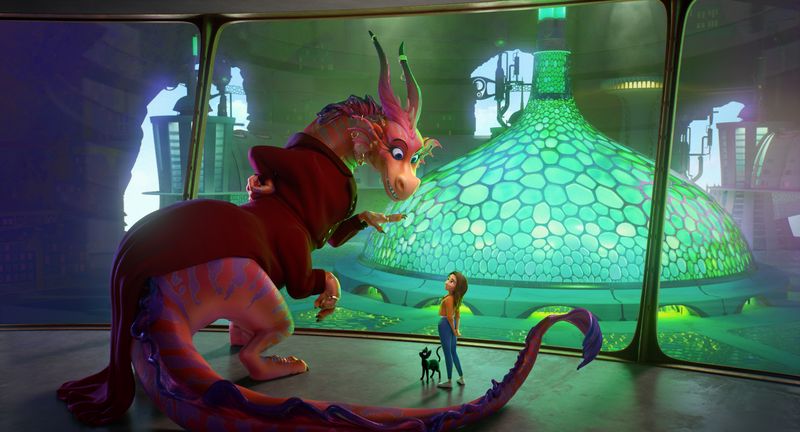 When a Dragon talks you listen!

Luck is brimming with creativity in its world-building. The Land of Luck is a vivid and visually stunning creation with a lot of care put into the mechanics of how the source of luck works. Many of the well-known superstitions are represented in imaginative ways and there’s a practicality to the setup that acts as a beautiful compliment to the magic of generating luck. The contrast between the routine of keeping things running and Sam’s astonished reaction to everything she sees is used brilliantly to establish a working framework that can be followed or disrupted. The film doesn’t quite do enough with developing the bad luck side of the setup despite repeated assertions that it has an important part to play. Balance could have been better practised on a conceptual and storytelling level though the intended point is still made.

The plot supports the worldbuilding. Sam and Bob have the shared goal of obtaining a lucky penny and cycle through a number of plans that lead them through the world the film inhabits. Each plan fails which prompts them to come up with a new one that takes them to another part of the Land of Luck. Each part is different to the last while still feeling like part of the same structure. This prevents the film from becoming stale as it always has something new to offer while remaining firmly on task.

Other characters feed into this world in different ways. Whoopi Goldberg as the Captain is an excellent authoritarian pseudo antagonistic force that is realistically handled rather than being demonised for being a boss who doesn’t truly understand Bob. Their relationship with each other and the world they inhabit ends up being really complex. It’s something the film could have taken a shortcut on but instead, it chooses the more complicated path and it’s better for it. Jane Fonda as the Dragon; the CEO of the Land of Luck is clearly having a lot of fun with an over-the-top yet compassionate character and Flula Borg’s Jeff the Unicorn is a delight any time he appears with a heartfelt story into the bargain. The only character that seems superfluous is Gerry (Colin O’Donoghue) as he performs much the same function as Bob and the film never finds anything unique for him to do. 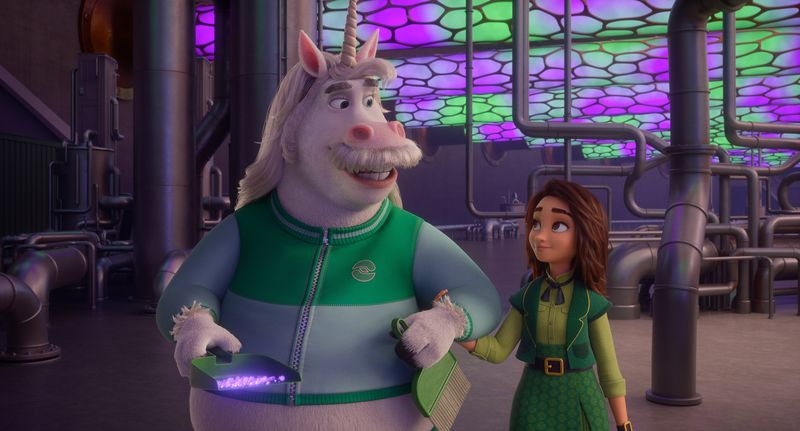 I’m having a very strange day

The film touches on a number of themes. Its commentary on the concept of luck and that bad luck doesn’t have to be a bad thing because of what can come from it is well delivered. This is something Sam comes to realise when she’s encouraged to take stock of her life and recognises the good that has come from her years of bad fortune. The message is to look at the bigger picture rather than focusing on the short-term impact of setbacks. It isn’t as profound a lesson as it could be as Sam is an innately positive person but external recognition of how wonderful a person she is is revelatory for her and changes her outlook on life in a meaningful way.

Ideas like stagnation and how dangerous it can be to live in fear of an unknown are also in the mix along with the importance of understanding all angles and even brief coverage of the notion of allowing work to consume your life at the expense of personal attachments. Some of these ideas aren’t as well developed as others and the film rushes through some things that demanded more time to be properly explored but they all feel connected which mitigates some of this. As a personal character journey for Sam Luck excels. It’s gripping, heartwarming, stuffed with ideas and routinely hits the right emotional beats. 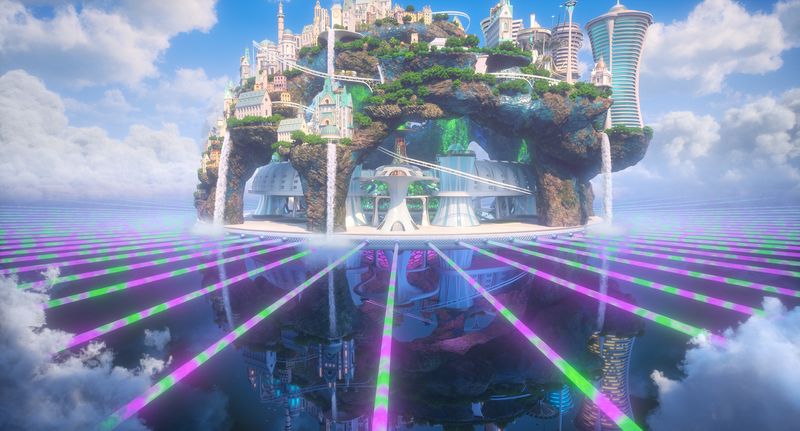 Luck makes the world go round

A fascinating and moving character-driven story bustling with creativity and compelling ideas presented in a visually stunning way. Sam is an excellent point-of-view character wonderfully performed by Eva Noblezada. Her relentless determination and innately kind nature carry the film and her boundless curiosity provides ample opportunity for the mechanics of the world to be explained to her. Her dynamic with Bob is engaging and grows naturally over the course of the film. Bob’s arc is simple but well handled and he’s a strong presence in the narrative. Other characters fit in nicely but there is one that is noticeably superfluous. The depiction of the Land of Luck is brimming with creativity. It’s a vivid and visually stunning creation with a lot of care put into how it works. It’s incredibly imaginative and there’s a practicality to the setup that acts as a beautiful compliment to the magic of generating luck. The film touches on a number of themes and explores them well for the most part. Some aren’t as developed as well as others but they all feel connected. As a personal character journey for Sam Luck excels. It’s gripping, heartwarming, stuffed with ideas and routinely hits the right emotional beats.