Before beginning the review properly I feel it’s worth pointing out that I have no real memory for the original Mary Poppins. It’s a film I saw when I was really young and haven’t seen since so I wasn’t able to specifically compare this outing to what had come before. Of course it’s such a cinematic landmark that it’s impossible not to know the highlights through cultural osmosis so I had some level of awareness of what the film means to people before watching Mary Poppins Returns. I suspect many viewers will be in this position.

Mary Poppins Returns picks up around 20 years after the first film; Michael (Ben Whishaw) and Jane (Emily Mortimer) are now adults suffering from more adult oriented problems. The most tragic figure is Michael who has recently become a single parent following his wife’s death and now has to deal with the prospect of losing the family home because of his inability to pay off a sizeable loan. Mary Poppins (Emily Blunt) comes back to provide assistance to the family in their time of need and magical hijinks soon ensue.

It would be unfair to say that Mary Poppins Returns is a bad film as it’s more likely that it’s simply not for me rather than not being good. Having said that I would say that it fails to stand out as being memorable or necessary in its own right. As I said it has been a long time since I’ve seen the original but the highlights are so prevalent that it’s easy to recognise that this film was trying to capitalise on audience nostalgia to create a connection. This begs the question; why was this film made other than the obvious desire to make money out of an established property? Audience nostalgia is a common aim in mainstream filmmaking in the current climate because connection to a known property in theory provides a guaranteed audience though the lesser efforts usually do little more than remind audiences of the thing that already exists. I’m not saying that’s all this film does but it doesn’t do enough to truly become its own thing. If constant reminders of the original is what you’re looking for then you’ll get along great with this.

Part of the problem is the story. It just isn’t all that engaging and the adult members of the Banks family are nearly bereft of personality. Ben Whishaw does a serviceable job as Michael but outside of his constant distress and disturbing naivety there isn’t much to him. Emily Mortimer is similarly fine as Jane but the characterisation is far too thin to make her memorable in her own right. 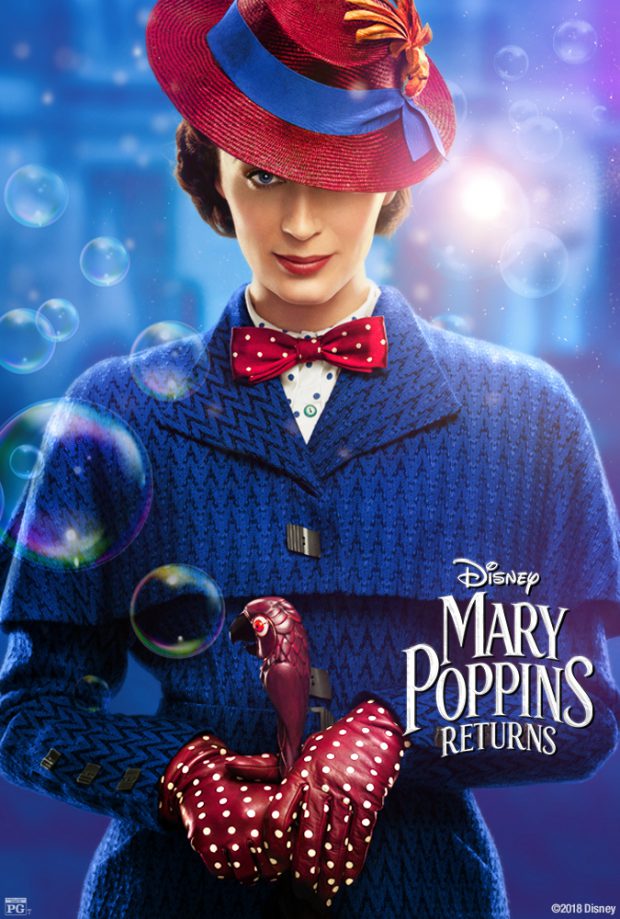 Michael’s children Anabel (Pixie Davies), John (Nathaniel Saleh) and Georgie (Joel Dawson) are your fairly typical precocious children common to Disney films but they aren’t irritating or obnoxious. Considering they have to carry a lot of the film they do a really good job of giving their characters some depth and fare pretty well acting against the rest of the cast.

Lin-Manuel Miranda’s Jack is an optimistic lantern lighter who continues to believe in the magic of Mary Poppins after his transition into adulthood. He’s a good character performed well by Lin-Manuel Miranda. He shares a fun dynamic with Emily Blunt’s Mary Poppins and generally embodies the magical optimism that defines the film’s tone.

Emily Blunt’s Mary Poppins is the highlight; she takes the role and makes it her own rather than doing an impression of Julie Andrews. Taking such an iconic role and putting her own stamp on it is definitely to her credit as there is always the risk that audiences wouldn’t accept a different take on the character. Blunt’s comic timing, ostentatious vocal delivery and general presence are constantly magnetic and engaging. She spends most of her time with the Banks children in order to distract them from their inevitable homelessness but there was a wasted opportunity for her to reconnect with the adult versions of the children she once cared for. It especially stands out as being a missed opportunity when she states that helping the -now adult- Banks children is one of her reasons for showing up.

Colin Firth’s William Wilkins is the antagonist but the film doesn’t make the effort to turn him into anything resembling a great -or even passable- Disney villain. Firth has almost nothing to work with here and his villainy is revealed through some painfully on the nose dialogue. It’s unclear why he’s so fixated on making sure that Michael doesn’t keep his house. It comes across that he’s motivated by general greed but there’s also an unexplained vendetta against the Banks family specifically.

The original film is famous for some iconic songs and this outing looks to capitalise on that by featuring several songs that are brand new yet sound familiar enough to please fans of the original. It both works and doesn’t; the presentation of the songs is really dynamic, creative and visually interesting. A particular highlight is an extended sequence on the surface of a porcelain bowl leading into a musical number. The song itself isn’t all that memorable but neither are any of the rest of them. They are at best inoffensive and will likely please a fair chunk of the audience but I found them mostly overlong as well as unmemorable. They are somewhat catchy but other than that don’t have a lot going for them. Instant classics they are not.

All told this is a disappointing follow-up to a beloved classic that does very little to stand out as being worthwhile in its own right. Individual elements such as Emily Blunt’s performance or some creative sequences work well enough but a dull story, unmemorable songs and a general lack of originality leave this feeling like a pointless sequel capitalising on audience nostalgia rather than standing out on its own merits.