Disney bring us another Hero’s Journey with Ron Clements and Don Hall’s Moana; the story of a young girl who heads out to sea to solve the problem of dying food on her island.

The titular Moana (Auli’i Cravalho) is the daughter of the chief and the early scenes are focused on her understanding what her responsibilities will one day be. In true Disney Princess fashion she has a higher calling in that the ocean is something she yearns to travel because of her thirst for knowledge. Her father, Tui (Temuera Morrision) wants to discourage this behaviour out of fear for what might happen to her and concentrates on readying her for her responsibilities as Chief.

I found this interesting because it is readily accepted by everyone that Moana will one day be in charge of them. There are no complaints about her gender nor is there any suggestion that she would be in any way unfit to lead because she happens to be female. In fact her gender doesn’t come into this story at all, be it in a positive or negative way and I found this to be really refreshing. Treating her gender as something that isn’t a big deal actually manages to be a big deal and it helps to promote really healthy values in the younger viewers. Well done Disney, you just keep on subverting these tropes.

Another thing in this film’s favour is that Polynesian culture is represented here in a big way. I won’t pretend to know a lot about it but a quick Google search tells me that at least some of the mythology is touched on. It would certainly be fascinating to read up on it and I might do someday but the fact that Disney are adapting Polynesian mythology into a story like this is a huge attempt to diversify their storytelling in a big way. 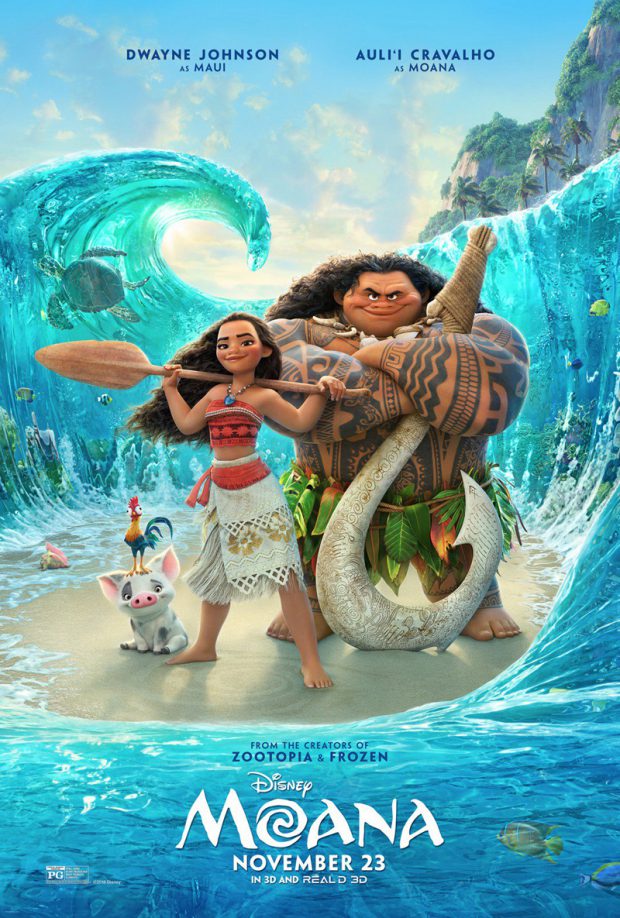 So does this story work in the context of this film? Yes it does and it works really well. Moana is a great character and she is very well voiced by Auli’i Cravalho who adds layers to the character by showing strength and vulnerability as well as having a lyrically pleasing voice to listen to which definitely helps during the songs. Her journey is a fairly typical one in terms of the emotional beats but she develops so naturally throughout that it is barely noticeable. I was very invested in Moana and wanted her to succeed throughout so this film definitely succeeds in making a memorable character.

Another thing I found striking is that there is no love story in this film at all. Moana is on a quest to save the people she is destined to lead but nothing about that means finding a husband. Disney have been acknowledging that there are different types of important relationships in efforts like Frozen or Big Hero 6 and the trend continues here.

The most important relationship for Moana is with Maui (Dwayne Johnson), a Demigod who she needs help from to achieve her goal. This starts out as you might expect with the two not seeing eye to eye and Maui being an obstacle to her at first but develops organically across the film and creates a really natural friendship that has its ups and downs throughout.

Maui is a lot of fun with a great deal of depth and Dwayne Johnson does an amazing job of bringing him to life. Johnson oozes charisma and brings a lot of it Maui who starts off as being charmingly arrogant yet redeemable with plenty of opportunity to develop in believable ways. When Disney get around to making a live action version of Aladdin then Dwayne Johnson should absolutely play the Genie as I feel he has the charisma and comic timing to pull it off.

The story moves along at a great pace with almost no lulls. Everything feels important and it is almost entirely character driven which held my interest since all of the major story beats were directly connected to the characters and how they related to one another. There is one point in the middle where things slow down a little too much and a point that had been well made before this point is repeated but other than that everything keeps moving and remains interesting.

As far as the songs go I’d go as far to say that they are better than those used in Frozen with a particular number more than matching the quality of the ever popular “Let it Go”. This will be an unpopular opinion I imagine but I found this film stood out in terms of the songs created.

This probably goes without saying but the animation is incredible. The character designs are gorgeous, everything is bright, warm and colourful and the water effects almost look real. I found the whole thing visually breathtaking and when the story is able to match this it makes for a very satisfying experience.

An excellent film that has compelling characters, a fun story and beautiful animation along with memorable songs. The central relationship being the friendship between Moana and Muai works wonderfully and the actors bring them to life with ease. A lot of points are won for Moana’s gender never being a focus in the story and a story crafted around Polynesian mythology. At its core it’s generally feel good family fun and it’s hard to find fault with that.