Tom Ford’s Nocturnal Animals explores the loneliness of a gallery owner feeling insecure about her life choices when she reads her ex-husband’s manuscript.

Susan (Amy Adams) is immediately establlished as a successful career woman who owns an art gallery and is married to someone equally successful (Armie Hammer) so she is a woman that many would envy. Her main problem is that her life isn’t as perfect as it might seem from the outside. She lives in a cavernous house that is sleek and stylish but ultimately empty and her marriage is clearly on the way out.

The house is a great visual representation of how she feels in her own life and the fact that she spends so much time alone in there makes it feel very unsettling. It is normally dimly lit and the emptiness starts to feel suffocating after a while. Susan spends most of the film alone so there aren’t many opportunities for dialogue to show how unfulfilled in her life but the visuals show this better than dialogue ever could.

Susan is forced to re-examine her life choices when she receives the manuscript of a novel written by her ex husband Edward (Jake Gyllenhaal) and finds herself absorbed in the brutal tale of loss and revenge that he has written. 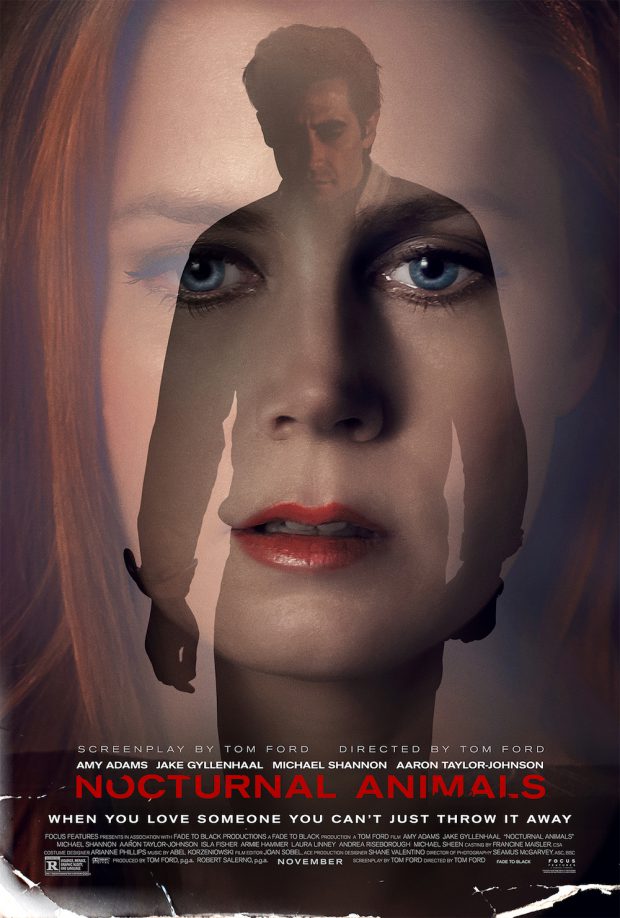 The film has three distinct narratives. Susan’s present day life is the connecting story with flashbacks to her failed marriage to Edward and the fantasy world of his novel filling the rest of the narrative.

I found the present day story to be really compelling as Ford creates the perfect atmosphere of loneliness and regret for Susan to stew in. Everything about her life feels artificial and Amy Adams plays the character in a constant dreamlike state. It’s a wonderfully subtle performance and fits the overall tone perfectly.

The most interesting story was the fictional world of Edward’s book. It’s a really harrowing tale of a man named Tony (also played by Gyllenhaal) is forced off the road by a group led by a man named Ray (Aaron Taylor-Johnson). After receiving brutal treatment at the hands of this group his wife (Isla Fisher) and daughter (Ellie Bamber) are killed which starts Tony down a road of revenge. He is aided by Bobby (Michael Shannon), a dying cop who wants to see justice done even if it isn’t necessarily within the letter of the law.

It’s a well put together story that possibly could have carried a film on its own but as a companion to Susan’s examination of her life choices it works really well. The biggest contrast is on a visual level with much of these scenes taking place in the hash daylight of the desert instead of the dimly lit decadence of Susan’s life. The visuals show the difference between Susan’s comfortable life and the the anarchy of the Texas setting.

Gyllenhaal does a fair job here but I’ve seen him do better in other films. He does more than carry this secondary narrative but Michael Sheen really steals the show here by fully inhabiting the cancer suffering cop who wants to make sure that guilty men don’t go free. Aaron Taylor-Johnson also provides a villainous turn as the morally bankrupt Ray.

Despite how different this story is to Susan’s present day life, Ford manages to keep the two connected through well placed transitions such as Tony in the batch cutting to Susan in the bath. It keeps the viewer guessing and reminds us that the two stories impact each other. Having imagery from the book bleed into Susan’s life through hallucinating the characters at different points works well too.

The film falls apart slightly with the flashback narrative. It does help establish how Susan got into this current situation and how suffocating her relationship with her mother was but it doesn’t connect as seamlessly as it should. It might be the lack of attention placed on this but I didn’t find Susan and Edward’s relationship to be all that believable despite how passionate it was supposed to be. It’s a tall order to have three very different narratives compliment each other and it doesn’t entirely work with the flashback story.

A very engaging film with good characters and a strong story that is well told. The concept of loneliness is well explored and the three different narratives work together fairly well. More time could have been spent on the flashback story but it does flesh out some aspects of Susan as a person even if it doesn’t connect as well as the fantasy story does. Despite some small shortcomings this is a film that will keep you on your toes and suck you into its uncomfortable atmosphere.