On the Silver Screen 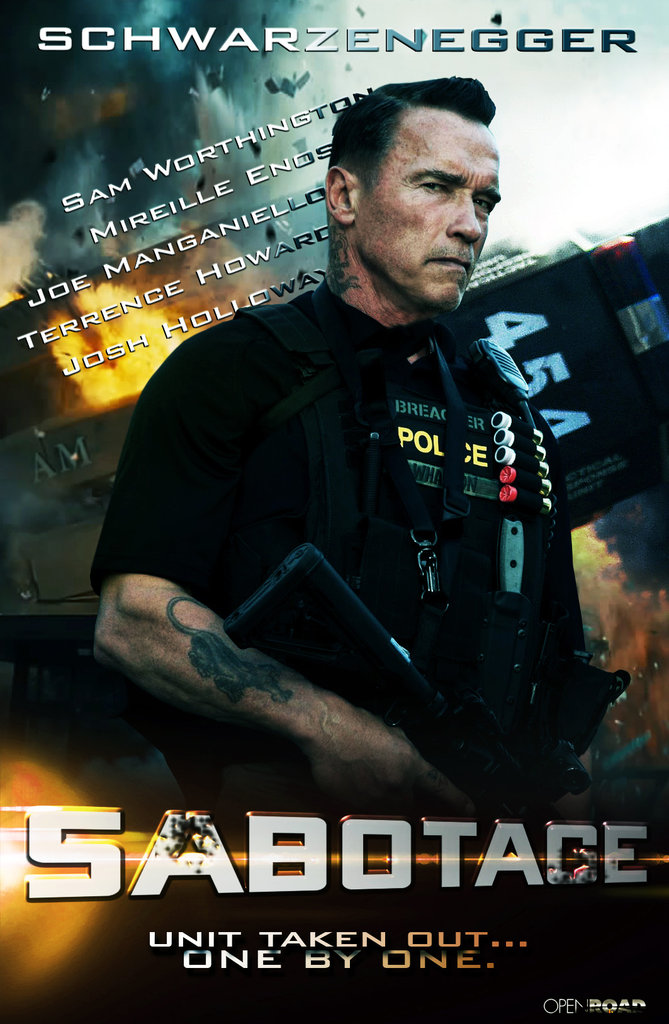 Been a couple of weeks since I did this column but I haven’t been seeing as many recently and the ones I have seen went up on Adam’s site, anyway I have been to see things to here they are: An Arnie action movie is normally something that I get really excited about because I’m a fan of Arnie and his particular brand of macho action cheese that only he can pull off. I’m happy enough with a silly action film that allows me to just enjoy some rampant violence that I don’t have to take enormously seriously. I’m sad to say that this film doesn’t really deliver on that in any significant way. It seems to exist in this horrible limbo between serious and cheesy which doesn’t really work.

Arnie leads a team of Drug Enforcement Agency officers who are your standard elite squad of manly men -and one woman- with the sole purpose of kicking ass. All of the characters are ridiculous caricatures but the most entertaining scenes in the film came from the manufactured camaraderie through the f-bomb filled banter, it’s nothing that hasn’t been seen a million times before in better movies but it worked here for the most part and made the film feel a bit old school. The story surrounds this team being picked off one by one in horrendously violent ways -one of them in particular is very gruesome- and the investigation into this.

When the film begins with the investigation plot that’s where it really lost me, there were lots of tedious scenes of Arnie’s John and Olivia Williams’ Caroline going various places and talking to various people, finding out very little information and going somewhere else. It doesn’t help that there isn’t a lot of action going on throughout this and the fact that Arnie and Williams have next to no chemistry -despite the fact that the film keeps telling us that they’re supposed to have sexual tension- doesn’t help. The story is ridiculously padded by the wrong things, a couple more action scenes might have helped round this out a little better. The mystery itself isn’t very engaging and it’s really easy to suss out. It’s a real surprise that a film starring the king of one liners doesn’t actually have that many, not to mention very disappointing.

As for the action scenes, they’re ok but nothing spectacular. Arnie does get an impressive “one man army” moment and the climatic car chase is actually pretty exciting. There are better action scenes discussed in the dialogue, such as Arnie hunting down the killers of his family some years ago -now that’s a movie I would have enjoyed watching.

The cast list is largely filled with vapid meatheads like Sam Worthington and Joe Manganiello who attempt to chew scenery but fail miserably. Arnie does well with what he has but this doesn’t seem to be a film that was written for him. The best Arnie films are those that are written with him in mind because the dialogue is often tailored a certain way to suit his unique style.

To conclude, this isn’t all that worth checking out. There are better Arnie films and there are better action films. The blend of cheesy banter and a serious tone doesn’t work and makes the film feel confused. I’d say wait until The Expendables 3. Don’t get excited, it’s not the new one but I did have the pleasure of seeing the 1954 original on the big screen recently. I’m something of a fan of monster movies, especially the Toho ones so getting to see this in a cinema was really exciting.

It’s been a number of years since I’ve seen it and some of the finer details had slipped my mind in the interim so it did feel fresh to see it. There’s not an awful lot that I can say about this film that hasn’t been said a million times in a million ways but I felt compelled to pass comment anyway. Incidentally for a really good review as well as some in depth historical context you should check out the review by SFDebris which can be found here and here.

So, this is it, arguably the template for the modern monster movie and the modern disaster movie as we know it. This example has endured for decades because it works very well and is showcased really well here, who’d have thought they’d get it so right first time?

The story involves the attack on several boats by a large and destructive force that the Japanese call Gojira, supposedly a mythical sea beast that attacks when man has angered it. It’s really clever that this film begins with a mythos like that, Godzilla being established as a mysterious beast lifted right from legend and folklore really helps sell the scale of such a creature. Many theories are submitted as to what could be causing these attacks, the scientific community drawing on the large amounts of radiation left behind after these attacks and hypothesising that the Nuclear testing has somehow woken a prehistoric creature that had been previously resting -they find some other long extinct life form that supports this- or that that testing has somehow created a new and terrifying form of life, the film never makes this clear and gives the audience a talking point to come up with their own theories after the film is over -Romero’s Zombie series anyone?

Since we live in an age where infinite copies have been made of this idea, the story is somewhat predictable, the creature attacks several times until someone comes up with a way to kill it. In using this plot the film becomes the template for many monster and disaster movies to date and why not? It works and it works well, gives an easy narrative structure to follow that leaves lots of room for spectacle. Something this film delivers on in spades, naturally the effects look pretty dated now but strangely they still hold up. The grainy black and white footage coupled with the pseudo realism of the physical creature being there in the form of a guy in a suit with the illusion of scale shown by stomping on miniature buildings and model trains etc. It has a sort of timeless quality to it which probably has a lot to do with the enduring legacy this film enjoys.

One thing this film does that many of the successors don’t is pose the ethical question of whether it’s ethical to kill such a unique creature. There is a character called Doctor Serizawa who studies oxygen of all things and in his research has discovered a way to destroy it -calling the discovery The Oxygen Destroyer. He is adamant to not let it fall into the wrong hands so keeps it to himself but the continued and escalating threat of Godzilla forces the issue since this device is the only thing that could potentially stop Godzilla. This weighs heavily on Doctor Serizawa who doesn’t want to see this used as a weapon and values the existence of something as unique as Godzilla but the situation demands action so the device is used. The most interesting part of the film happens here where Serizawa selflessly sacrifices himself to ensure that this thing that is as dangerous as Godzilla is never used again, the ending is very bittersweet as Serizawa, The Oxygen Destroyer and Godzilla are lost -three unique yet dangerous things. There is the suggestion that another Godzilla could appear at some point but the ending is still morbid.

Anyway, there’s a little bit on what I think of the original Godzilla movie, points that have been made countless times and will likely be made countless more but I love it.

I reviewed this on Adam’s site, you can find this here. Check it out as well as the other content on there.