A man on a trip to a new planet wakes up decades too early and has to contemplate life alone in the black silence of space in Morten Tyldum’s Passengers.

On the surface, this seems like a fairly workable concept. People dealing with isolation is nothing new in films and can be done really well under the right circumstances. This film seems like it’s onto a winner with a slick production design and the involvement of two actors who are innately likeable.

This isn’t a bad film by any stretch but it does have a lot of fatal flaws that I will get to. The early scenes where Jim (Chris Pratt) is prematurely woken up from his stasis by accident are the strongest as the film conveys a really effective sense of mystery. No explanation is given for why Jim was woken up specifically and Pratt does a great job showing the reality of the situation slowly sink in.

To avoid him talking to himself or being completely silent for long stretches he does have companionship in the form of the android bartender Arthur (Michael Sheen). Arthur’s a fun character who manages to appear human enough most of the time but never stops seeming artificial. Sheen brilliantly juggles the warmth to his interactions with Pratt and the off kilter programmed responses to keep reminding the audience that he is no substitute for a real person. 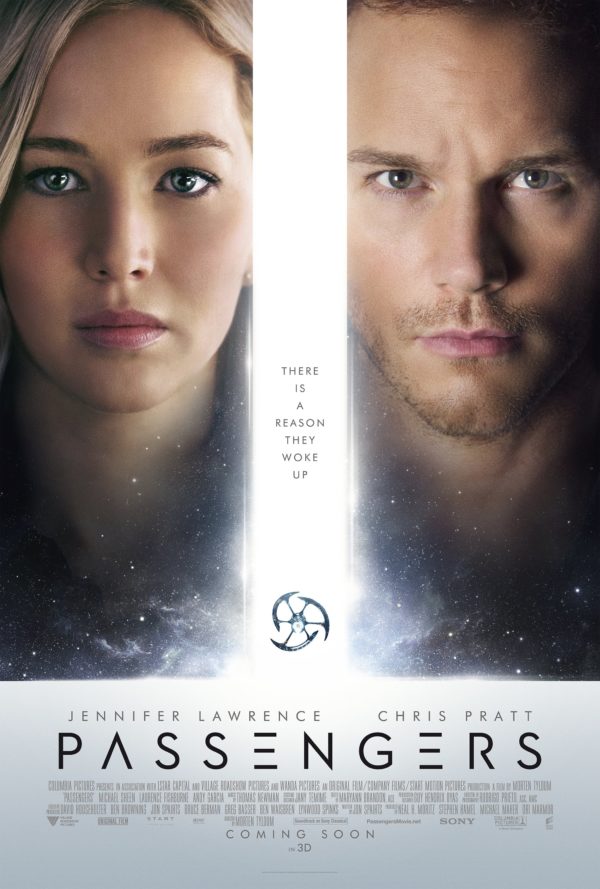 Once Aurora (Jennifer Lawrence) enters the story things start to go downhill. The idea of Jim suddenly getting human companionship while being on his own for so long is a good one but the execution is a real mess here. It is implied by the marketing that Aurora is accidentally woken up in the same way Jim is and as far as Aurora knows that’s what happened but the truth of the situation is that Jim imprints on her after going through her files to learn all he can about her. Basically he wakes her up because he has the hots for her and the only way he would have a chance to be with her is if she’s conscious.

I don’t even have to say how disturbing and sexist this is. Lawrence is far too good an actress to be playing the idealised woman for Jim in a film like this. Aurora’s characterisation is paper thin and the way she succumbs to Jim’s charms as time goes on doesn’t really land as the romance feels completely tacked on as a way to sell this film. There’s no depth to it beyond the effortless chemistry between the two leads and the whole thing sits on a bed of lies that never stops being disturbing.

A better film would do something with this and to Passengers‘ credit it does try a little. Long term isolation would probably cause people to go insane and a coping mechanism for that could be to imprint on something that eventually feels real. This is what Jim does and I wish the film had developed it more as it could have been interesting. The best way to follow through with this would be to have Aurora be nothing like the fantasy image Jim has built up and then there’s a friction filled dynamic between them.

It also doesn’t help that Jim continues to come across as reasonably well adjusted once Aurora enters the story. After so long alone and the questionable decision he made it doesn’t feel right that he would seem relatively unchanged from how he comes across at the start of the film. There were lots of better ways to play around with this concept and this film follows a really safe and disturbing narrative.

The second half of the film is generally very weak as it goes completely off the rails once the reasons for Jim being woken up are explored along with the system failures throughout the ship. I did like that there was no grander plan behind it but at the same time it all becomes progressively uninteresting. I genuinely feel that the mystery didn’t really need solving as all it did was remind me how ludicrous it is to assume that the stasis pods were completely infallible to the point that there is no contingency built in for occupants to use in the event of being woken up prematurely. It was something I could forget about as long as the film stopped reminding me of it but the needless answering of questions only highlighted how silly this whole thing was.

Despite the gaping flaws I was entertained by this film. As I said above, Chris Pratt and Jennifer Lawrence are engaging enough to make this nonsense work, the design of the ship is really cool and the locations within it are varied enough to keep it from feeling as limited as it could have. I was never especially bored by what was going on but there was a lot that needed fixing and far more interesting ways to explore this concept that the film barely goes near.

An entertaining enough experience that could have been so much better with a few tweaks. Chris Pratt and Jennifer Lawrence are always watchable which helps with the paper thin characters but the love story is unbelievably disturbing and sexist because of what drives it. There were definitely better ways to explore the idea of long term isolation and the psychological effects it can have on people but the film doesn’t seem to be interested in that. Impressive visuals and good actor chemistry isn’t enough to save this from a galaxy of missed opportunities.