An autistic Star Trek fan runs away from her caregiver to cross the country so that her entry to a writing competition can be submitted before the deadline in Ben Lewin’s Please Stand By.

As a Star Trek fan this film was simply something I had to see. The immediate concern might be how accessible this film is if you don’t happen to be a fan of that particular franchise but I’ll put those fears to rest right now by confirming that being a fan is in no way essential though it does enhance the viewing experience.

In many ways this film is about belonging to any fandom. They are unique things that can provide a sense of community without ever engaging with it. Comfort can be provided by a fictional universe that can be fully immersed in while keeping the problems of the real world at a managed distance. Anyone who considers themselves a fan of something and enjoys escapism in one form or another will be able to understand the importance people place in fictional works.

Wendy (Dakota Fanning) is autistic but that doesn’t define her. Dealing with it is certainly part of her character but it isn’t who she is. The film uses the early scenes to establish what her life is like, what support she has around her and how she goes about her daily routine. It’s a full and regimented life where every day brings its own challenges. She clearly has an open and trusting relationship with her carer Scottie (Toni Collette) and finds life fairly manageable most of the time. We see an example of the dangers of breaking that routine when her sister Audrey (Alice Eve) visits and things become overwhelming for her. 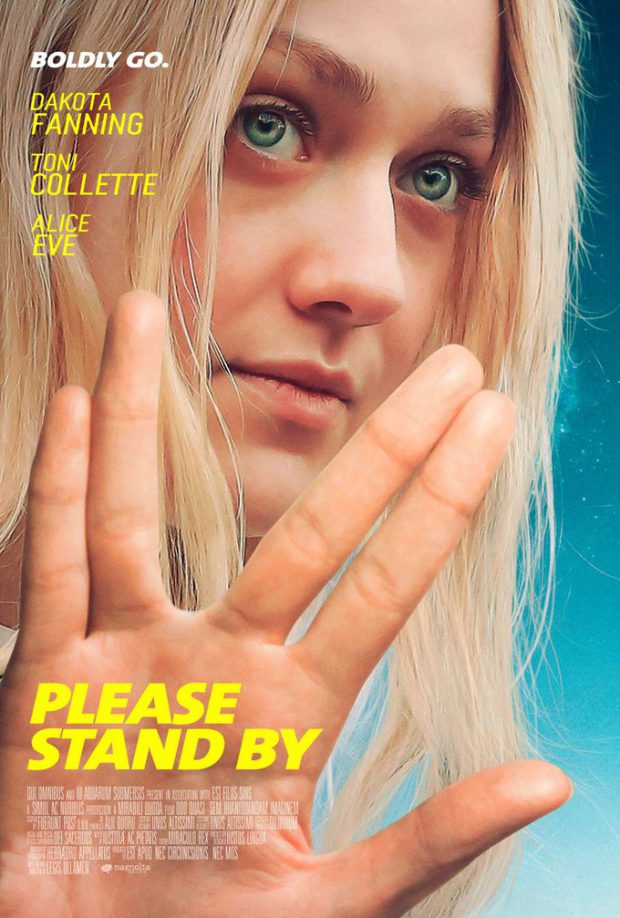 After hearing about a Paramount sanctioned Star Trek writing competition to celebrate the 50th anniversary crafting the perfect story for that franchise becomes the biggest focus in her mind and she sets to work crafting an epic saga to be submitted as her entry. Amusingly the fact that Paramount would endorse such a competition is the most far fetched thing about the film given how little fanfare the event itself was given but that’s beside the point.

When the script is complete Wendy realises that there isn’t enough time to post the script before the end date so she takes it upon herself to travel to Los Angeles to submit it personally. Along the way she comes across various obstacles and personal challenges that are worsened because her life has been about establishing and adhering to a routine.

This film is delightfully endearing with an excellent performance from Dakota Fanning who creates an incredibly likeable character. Wendy is compelling, thoughtful, kind and determined with a singular goal that she must achieve. There’s a degree of innocence to Wendy that comes from living a very isolated life but her intelligence means that she isn’t ignorant to how the world works. It makes her journey interesting and allows all of the situations to be informed by what she knows about the world around her. Using Star Trek as the fandom she finds comfort in is very important to the character because she identifies with Spock more than anyone else. Like her Spock doesn’t understand those around her and devotes a lot of his time to figuring them out. Her script heavily focuses on Spock with passages of it being read in the form of narration as the film progresses. They are always relevant to the situation and give lots of insight into how Wendy views what she is experiencing. It’s a clever connection to make and adds so much weight to Wendy using that comparison.

Please Stand By struggles to define Wendy’s relationship with Audrey which does let it down considering how important that relationship is. Audrey is scared of her sister but also cares about her deeply. Not knowing how to react to something she doesn’t understand is the defining aspect of Audrey as a character but the film doesn’t really do anything with it. There is an attempt to establish their history and the reasons Audrey feels uncomfortable but there is no real resolution to this and the lack of development of Audrey as a character lets this aspect down.

The secondary plot of Scottie and Audrey pursuing her out of concern lacked the depth to be interesting and comes across as more of a missed opportunity than anything else. It is very much Wendy’s story and could have been left at that for a more satisfying experience. Thankfully the secondary plot doesn’t ruin the main one as it only acts as a temporary distraction here and there.

A good mix of emotional moments exist throughout the narrative. Wendy is so well developed that every obstacle she comes across feels more visceral than it otherwise would and the interactions she has with different people she meets are all fascinating in their own way. There is a particularly well executed Patton Oswalt cameo that is nicely foreshadowed earlier in the film and makes for one of the strongest moments. From beginning to end this film is a profound physical and emotional journey for Wendy that helps her grow as a person and the fact that Star Trek is a part of that only enhances the experience for me personally.

A delightfully endearing film with an excellent leading performance from Dakota Fanning. The references to Star Trek don’t make the film accessible for those uninitiated but will enhance the experience for those in the know. At its core it’s a profound emotional and physical journey that never stops being compelling. The only real failing is in establishing Wendy’s relationship with he sister, Audrey which suffers due to the latter being underdeveloped. Despite that the character study aspect is wonderfully handled and the layering of Wendy as a character is brilliantly intricate which makes her journey worth investing in.