A skilled warrior has all of her skills tested when a ferocious alien hunter comes to Earth in Dan Trachtenberg’s Prey.

The Predator franchise is a mixed bag. Predator is an undeniable classic and Predators was a really strong idea executed well but Predator 2 only manages to reach the middle tier of quality and The Predator is very poor. If you count the two Alien Vs. Predator movies then it’s on very shaky ground as a franchise -although this website is on record as enjoying Alien Vs. Predator– so any further attempt to tell a story involving a Predator is going to be met with trepidation from many. Prey starts with a compelling concept where the Predator (Dane DiLiegro) is placed into the world of the Camanche Nation 300 years ago with the obvious novelty of primitive weapons and skills against advanced alien technology. 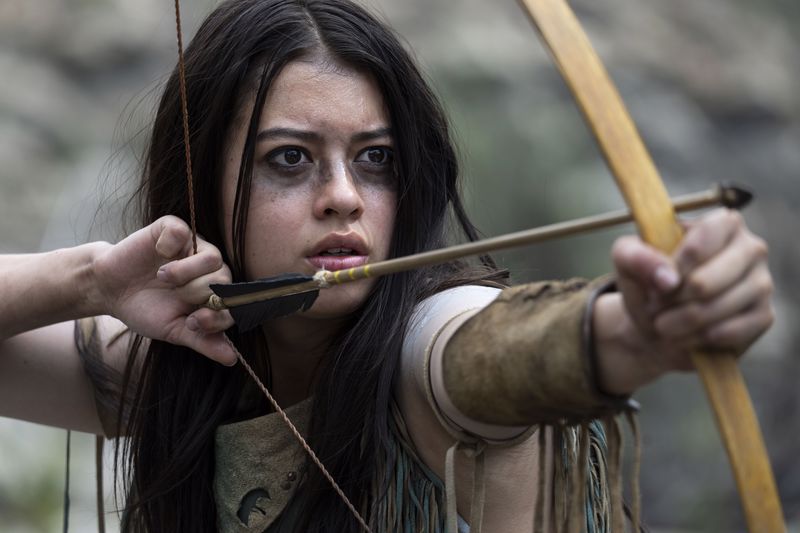 I have to become something else!

An obvious question is how that could possibly work. Arnie at his burliest with machine guns and explosives barely made it out alive so what hope do people with axes, spears and bows and arrows have? The answer is far from simple but incredibly interesting. Prey is structured in such a way that the Predator is part of the surrounding story without being the entirety of it. Much of the early part of the film develops the threat the Predator represents by showing it relative to other dangers the Camanche people routinely deal with. It starts by killing and skinning a snake before taking on a wolf and finally killing a bear; all threats the characters reference and take seriously. It’s incredibly efficient storytelling that creates a hierarchy of terror while ramping up the tension in an impressively organic way. The typical threats and challenges don’t disappear when they become aware of the Predator so the end result is a layered world that is difficult to tame.

The focal character is Naru (Amber Midthunder); a young warrior dismissed by those around her despite her being more capable than they are in some ways. Her character arc encourages her to achieve growth through learning to present herself in a particular way and recognise the worth of others even if they dismiss her.. There are lessons to be learned by those around her in recognising what she’s capable of. The motivation behind the dismissal isn’t explicitly gendered but it is in the mix. There are a number of displays of bravado that are implied to be part of why Naru is so easily underestimated but the film makes the challenge of overcoming it more prominent than the reasons it needs to be overcome. This makes it character-driven rather than plot-driven which means it’s far more engaging.

Prey is a masterclass in visual storytelling and the depiction of Naru clearly shows that. Much of what she thinks and feels is conveyed without dialogue and her actions highlight her sharp instincts and skills. One key development involves her figuring out how to innovate a throwing axe so that it returns to her without needing to be retrieved; something that saves her life but also sees her mocked by those that don’t understand the benefits of what she has done. It’s an excellent microcosm of how misunderstood and undervalued she is while highlighting the intelligence that renders her best equipped to survive the encounter. 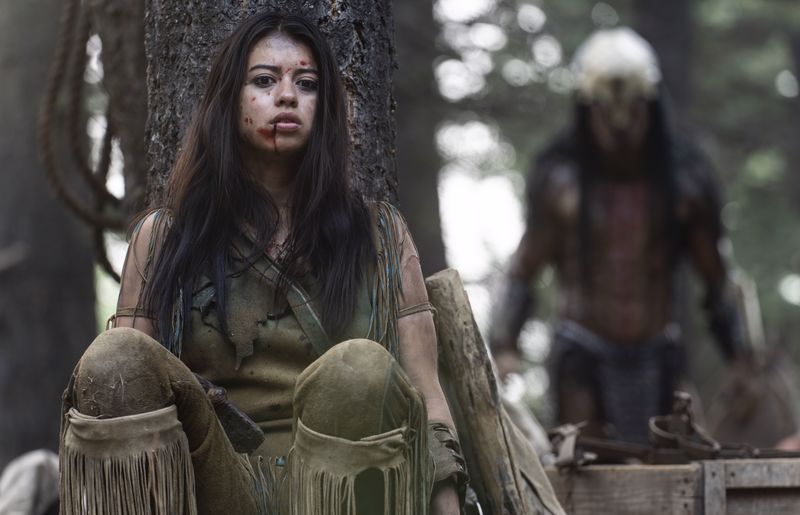 Amber Midthunder’s performance is excellent. She conveys so much with her physicality and her line delivery perfectly displays her fierce determination along with periodic vulnerability as cracks in her confidence appear. By contrast, the other characters are far less fleshed out as they exist either to compliment her development or act as obstacles getting in the way of the recognition she deserves. So much of the film rests on her shoulders and Amber Midthunder carries it brilliantly. Naru is an engaging protagonist and blends in with the world around her perfectly while standing out as someone remarkable within it.

The storytelling is simple yet effective. It’s very well paced, character decisions flow from established traits as well as sensible reactions to what they’re dealing with. No time is wasted and everything is in service of the story being told. The narrative largely takes the form of a series of trials that Naru has to overcome with the Predator being her final gauntlet. Narrative progression is mostly visual with dialogue used sparingly. It’s necessary given that Naru spends most of the film on her own and some scenes rely on the inability of the parties concerned to understand each other. In this case, actions very much speak louder than words and Prey is very immersive as a result.

There are several encounters between Naru and the Predator throughout the film designed to show her that there is something out there beyond anything she has ever encountered. She is encouraged to fear the presence of an invisible hunter that can best anything she is used to dealing with. The increasing body count as the film progresses gives her tangible examples of the danger she’s facing and forces her to question her ability to deal with it. Some of those encounters have circumstances that allow her to survive until the next one but each one is important in supplying information that she can use in her inevitable showdown. 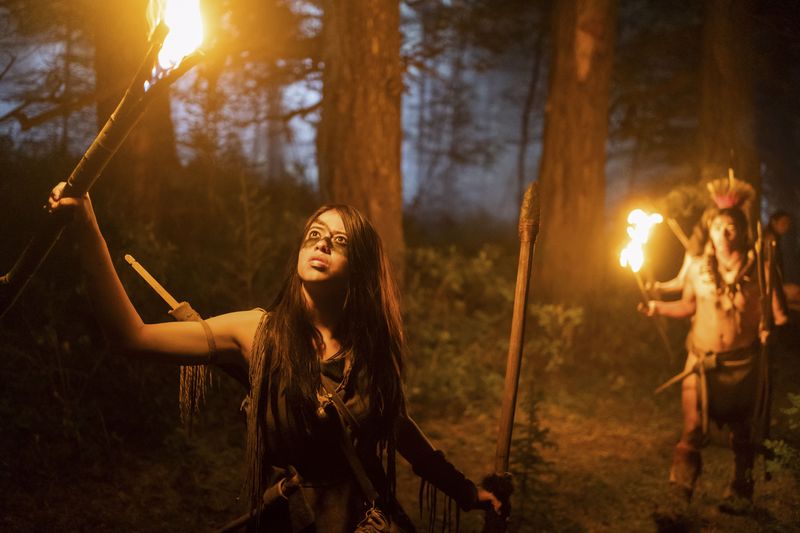 The Predator is a monstrous and terrifying presence. Taking the time to establish what it’s capable of through how it reacts to other dangerous animals and the surrounding environment outlines the capabilities so that everything is understood going into the climax. Fans of Predator, in particular, will recognise familiar lessons such as finding out how to evade its scanning capabilities and learning that it can be killed but Prey presents them in a fresh way even if there are winks and nods to the first film though those are affectionate rather than clumsily overt. By the time they are deployed, they have been earned. The Predator is brought to life through stunning practical effects work and the design is really impressive. It’s familiar yet unique and there’s a tangibly visceral quality to everything it does. It has weight, presence and feels like a part of the world around it. Mud sticks to it, rain or bodies of water cause moisture to drip off its visible or cloaked form and it bleeds when attacked. One important detail is that it’s relentless but not indestructible and the wear and tear over the course of the film makes it a believable threat. Once again, visual language is important as the sustained injuries create a sense of hope.

Outside of the Predator, the film is a visual delight. Clothing and weaponry look authentic and the location adds to the overall atmosphere. The attention to detail is spectacular and Dan Trachtenberg has a real eye for making the environment come alive. Different lighting conditions contribute to shifting moods and the Camanche nation is very lived in which supports the notion of well-cultivated traditions. Less is known about the Predator and the culture it comes from but the point is that it’s truly alien and the Camanche perspective in trying to understand it purely on warrior terms contextualises its presence in line with the culture observing it. It’s very effective worldbuilding and makes the title of the film a question in some ways as the identity of the titular “prey” remains an unknown throughout. 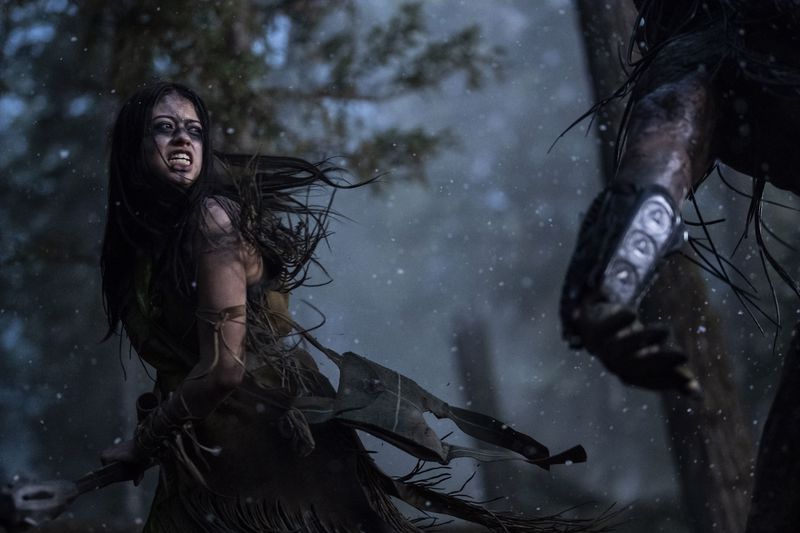 You messed with the wrong planet!

An excellent entry into the Predator canon with an outstanding leading performance, a masterful command of visual storytelling, stunning attention to detail and well-delivered terror. Naru is an excellent character wonderfully performed by Amber Midthunder who constantly impresses in her physicality and line delivery. The depiction of Naru highlights the command of visual storytelling. Much of her thoughts and feelings are conveyed without dialogue and her actions highlight her sharp instincts and skills. The storytelling is simple yet effective. It’s well paced and character decisions flow from established traits as well as sensible reactions to what they’re dealing with. The narrative largely takes the form of a series of trials that Naru has to overcome with the Predator being her final gauntlet. Much of the early part of the film develops the threat the Predator represents by showing it relative to other dangers the Camanche people routinely deal with to create a hierarchy of terror. Each of the encounters that Naru has with the Predator develop her understanding of the threat and culminates in a satisfying final showdown. The Predator is a monstrous and terrifying presence brought to life through stunning practical effects work. Its design is familiar yet unique and there’s a tangibly visceral quality to everything it does. The Predator has weight, presence and feels like part of the world around it. One important detail is that it’s relentless but not indestructible and the wear and tear over the course of the film makes it a believable threat. In general, the film is a visual delight with authentic clothing and weaponry combine with a location that adds to the overall atmosphere. The attention to detail is spectacular and the environment comes alive. The worldbuilding is excellent and makes the title of the film a question in some ways as the identity of the titular “prey” remains an unknown throughout.