Three animals are exposed to an experimental pathogen and balloon up to city destroying size in Brad Peyton’s Rampage.

Video game adaptations aren’t exactly cinematic gold. They are routinely met with mixed to negative reactions and are generally regarded as being an unworkable concept. My personal opinion is that for the most part they aren’t great but I enjoy the Resident Evil series, the first Tomb Raider film and the recent Alicia Vikander Tomb Raider outing so I don’t write off a video game adaptation as being automatically bad before it hits screens. Though I do acknowledge that there are terrible attempts such as Assassin’s Creed.

Rampage is an old arcade game that is lacking in story so in theory is prime fodder for a movie adaptation as the background can basically be built from scratch as long as monsters end up destroying cities at some point. The only real narrative in the game was that humans turn into monsters, something that the film doesn’t do.

One of the major drawbacks of this film is its story. It feels like it tries too hard to pack in a conspiracy driven narrative about secret genetic editing experiments being tested on animals. The film opens with an experiment gone wrong which sets up the events that follow. It’s not bad as such but it’s a big trope that bogs the film down with too much unnecessary story when all it really needs is an excuse for giant animals to attack a city.

The corporate conspiracy aspect would be fine if it was interesting but it really isn’t. Malin Akerman’s Claire Wyden and her brother Brett (Jake Lacy) serve as the human antagonists but make little impact in the grand scheme of things. They are returned to here and there to remind the audience that they exist but their overall contribution is minimal and the threat level nearly non existent. Their plan is stupid even by B-Movie standards and leaves no possibility of working out in their favour. If they were cut from the film and replaced by a meteor causing the animals to grow then it would have been better for it.

Pointless characters is something this film seems to have in abundance. Joe Manganiello has what can only be described as a cameo as a hunter who fails to impress with his skills considering the success rate he has. His contribution is to increase the tension and introduce the second creature but his presence fails to make an impact because the film has little interest in setting him up.

The film also boasts a military Colonel (Demetrius Grosse) who is your typical authority figure with no real idea what’s going on and has all the wrong ideas about how to deal with the problem. Such a character is standard in a film like this but this is a particularly bad example framed as an obvious extra antagonistic force to raise the tension at key points. Unfortunately none of the moving parts add up to very much. 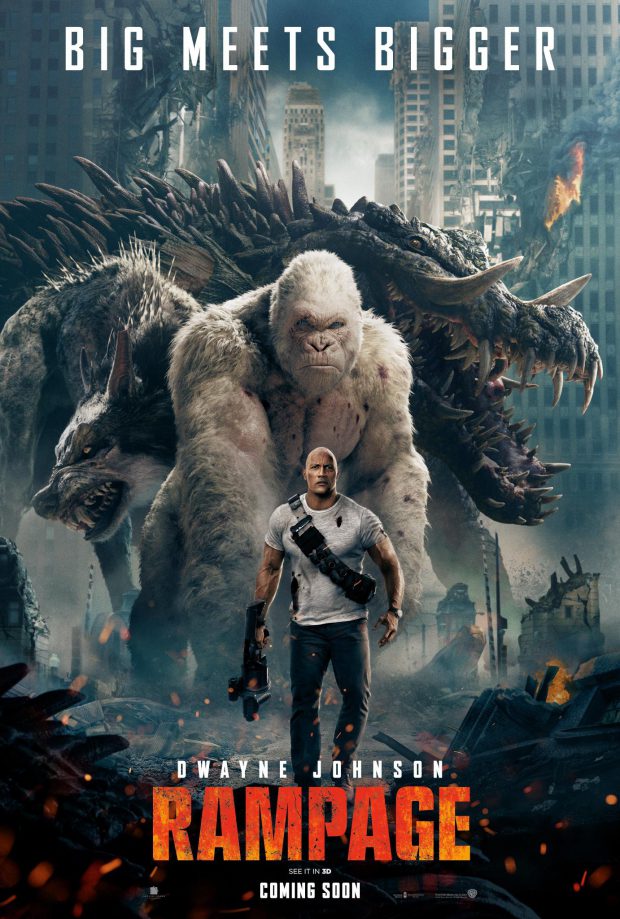 Despite the flaws there is a lot this film does right and a great example of that is the core relationship between Dwayne “The Rock” Johnson’s Davis Okoye and the Albino Gorilla, George. From early on their connection feels lived in, real and endearing with some work done to establish that Davis gets along better with animals than with people. George is always shown in a sympathetic light and portrayed as a victim of circumstance when he’s infected with the pathogen that causes him to continue growing as well as develop heightened aggression. Throughout the film Davis tries to defend him and tries to encourage people not to treat George with hostility.

This relationship gives the city destruction some weight as George is a character that the audience can be invested in. When he is confused and driven to attack people it is seen as a tragedy and fearing for his safety prevents the climactic property damage driven action sequence from being empty and disposable.

Amusingly Davis is pretty much a video game character showing great resistance to bullets and other injuries as well as near infinite skill level when it comes to doing pretty much anything. There are many sequences where his survival will baffle audiences though it seems oddly perfect that Dwayne “The Rock” Johnson plays such a character and Rampage is definitely not taking itself too seriously so it works.. As always, Johnson has more than enough charisma to carry the film and is always engaging to watch.

Davis also spends much of his screen time interacting with scientist Kate Caldwell (Naomie Harris) who is an effective foil for him and calls him out in his mistrust of other people. Harris does a good job with a fairly thin character who serves an important plot function and little else. She does have plenty of agency within the confines of the film and stops short of becoming a formulaic love interest.

Jeffrey Dean Morgan makes a memorable contribution in the form of self confessed cowboy Harvey Russell. He clearly takes great delight in chewing the scenery. As with most characters there’s little more to him than his function in the film but having him played by such an excellent character actor definitely helps to make this character an important part of an engaging collection of characters.

The real point of this is to have giant animals fight each other while trashing a city and this film definitely delivers that. The climactic action sequence is wonderful in its sheer lunacy and entertainment value. The visual effects are excellent and there’s a lot of creativity in engineering battles between these giant animals while Davis also contributes as only he can. If the 2014 Godzilla film had stopped cutting away from the action then it might have been something like this. In many ways, Rampage delivers what Godzilla promises and leans into the obvious entertainment value of three giant creatures having a large scale conflict.

Unfortunately the film does take a while to get to this point thanks to the unnecessary characters and plot diversions. Despite it not being that long a film it does sometimes drag and earlier sequences aren’t all that remarkable. The third act brawl does prove to be worth the wait but there are definite pacing problems.

An entertaining cinematic experience that more than delivers on what it promises even if it does take a little too long to get there. The film suffers from unnecessary and uninteresting characters who offer little more than pointless asides to lengthen the running time. The corporate conspiracy plot was needless as there was an easier way to get to what the film is really about. Despite this the film does a lot right such as the relationship between Dwayne “The Rock” Johnson’s Davis Okoye and the Albino Gorilla, George. The strong work done on building this connection means there is added weight to the climactic action sequence as viewers are encouraged to be invested in George. Davis is pretty much a video game character with great resistance to bullets and near infinite skills that make him useful. Having Dwayne “The Rock” Johnson play a character like that feels very fitting. Naomie Harris also does well and manages to avoid being the standard love interest while having her own agency within the plot. Jeffrey Dean Morgan is excellent in his scenery chewing role as well.