Steven Spielberg brings a digital world to life in his adaptation of the wannabe cult classic novel Ready Player One.

I’ll start with a brief overview of my feelings on the novel. In short I think it’s an easy read but has several fundamental problems that prevent it from ever being good. The characters are thinly written, absurdly problematic and -in the case of the protagonist- really creepy. As a story it’s a page turner to some degree but lots of it wouldn’t adapt into live action very well.

Steven Spielberg avoids that problem entirely by sticking to the spirit of the book and choosing to adapt it in broad strokes but veering off in his own Spielbergian direction. He boils the story down to its essence by keeping the overall setup and the objective but changing just about everything else.

The protagonist is Wade Watts aka Parzival (Tye Sheridan) and his most defining character trait is blandness. There’s nothing to like about this character nor is there anything to hate. He’s a complete blank slate with no more substance than his digital avatar. In fairness the same can be said for most of the characters. Olivia Cooke’s Art3mis is little more than the unattainable manic pixie dream girl and the other characters barely make an impression one way or another. The actors do the best with what they have but have very little to work with which makes it very difficult to invest in them. 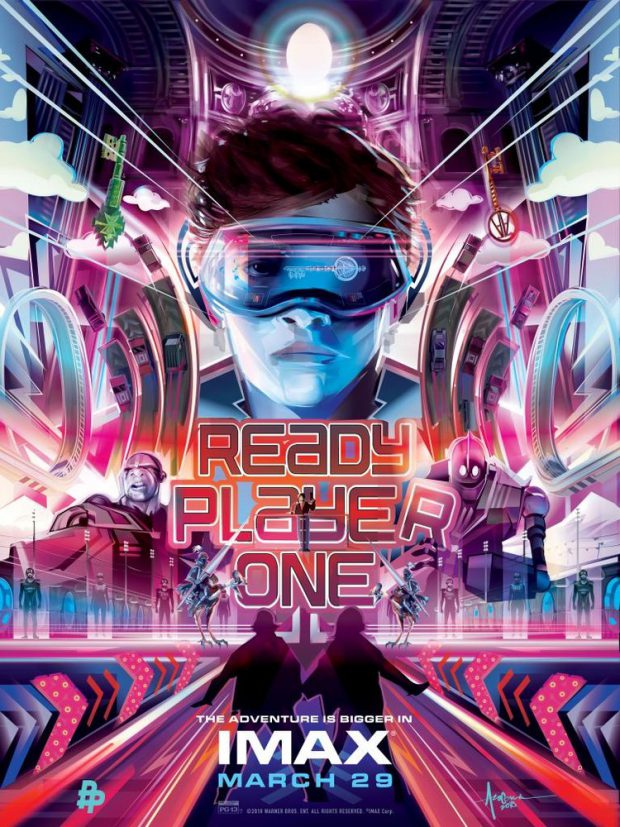 Mark Rylance as deceased digital genius James Halliday is the highlight of the film. Rylance delivers an engagingly awkward and distanced performance as the voice from beyond the grave inspiring the characters. Ben Mendelsohn’s Nolan Sorrento is a standard 80s business villain who lacks about as much depth as everyone else and ultimately fails to be a threat considering that he’s thwarted more frequently than a Saturday morning cartoon villain. He can do this sort of thing in his sleep and is engaging enough to watch.

In terms of plot the film is all over the place. The opening is an extended out of place narration that clumsily explains how the world works and sets up the contest that apparently everyone on Earth is obsessed with. From there it moves from set piece to set piece as the various characters solve really easy riddles to progress towards their ultimate goal. Some of these are better than others; an extended sequence exploring key scenes from Stanley Kubrick’s The Shining is the film’s highlight but a flying nightclub dance off is dull and painful to watch while adding very little to the overall story. The narrative suffers from a great deal of astonishing coincidences to make certain things work even if they strain credibility and make the world feel really small in the process.

This film -and the book that inspired it- is all about cramming in as many pop culture references as possible. Doing this amounts to one of the film’s biggest problems are there are simply too many of them to keep track of. I suspect this will be a popular film to freeze frame to see what makes up a scene and it’s possible that everything referenced will never be found. The problem with this is that there’s no weight to most of these references. They simply exist because they’re recognisable but there’s no sense of understanding of why they’re recognisable. As such using them becomes empty after a while and there’s a lot of really hammy dialogue where characters point at things that are more important than other things just to name them. Doing this shows a flagrant disrespect for the audience especially when naming the referenced material is ultimately meaningless.

Visually it’s a very distinct experience though whether that’s a good thing will be entirely up to the viewer. Scenes set in the digital world of the Oasis have a profoundly artificial quality to them that is very deliberate. It does mean that a lot can happen without worrying about how realistic it looks but the unreality of it all could be seen as really jarring. There are long sections set in the Oasis that almost overpower the real world segments and leave them forgotten which makes ramping up their importance later really difficult. There’s a balance to be had between the real and digital worlds that the film never quite achieves.

Despite its many flaws the film averages out as being entertaining. There are a lot of kinetic and well executed action sequences that lack any visible stakes but are really entertaining to watch even if they feel like a prolonged video game cutscene. A high octane race featuring many different vehicles from all corners of pop culture is visually impressive and sets up the Oasis as a realm with boundless possibilities in a way that is much more organic than clumsy narration. The ratio of good world building to bad world building is skewed in the bad direction but there are moments of promise in there.

Towards the end the film does a good job of marrying up real world stakes with the goings on inside the Oasis. What happens in one world affects the other in occasionally interesting ways adding previously missing tension to the climactic moments. More of this prior to this point would have made for a more satisfying experience overall but the final act does what it sets out to do really well. It wraps up in a really predictable and overly sentimental way that is internally consistent with what has been previously established.

An underwhelming experience that is fundamentally flawed in several obvious ways. None of the characters have any depth to them making it difficult to invest in their goals. The world of the Oasis is visually impressive though may be jarring in how artificial it looks. There is a persistent problem with making empty references that simply exist because they’re recognisable but carry no weight or meaning and the plot itself relies on absurd coincidence to move it along. One standout sequence exists and there is entertainment to be had in pure spectacle but clumsy world building, a lack of meaningful stakes and frustrating characterisation mean that the film fails to make any meaningful impact.