Rogue One: A Star Wars Story

Gareth Edwards brings us the first stand-alone Star Wars movie with Rogue One: A Star Wars Story -hereafter referred to as Rogue One-; the story of how the Rebellion came upon the Death Star plans.

There was a lot riding on this film. It’s the first in the planned Star Wars anthology stories that shine a light on different parts of the universe not covered in the main saga. We’ve had plenty of this sort of thing in Star Wars: The Clone Wars and Star Wars Rebels but animated episodic television is less of a risk than high budget cinema.

Even if you’ve only watched the 7 Star Wars films and have no exposure to the treasure trove of books, comics, video games, animated shows, holiday special and everything else in-between there’s no denying that the Star Wars universe is vast and detailed. There’s plenty to suggest that in the main films so the prospect of digging into that by telling different stories is fascinating. Who doesn’t want to see more stories set in a universe they love? 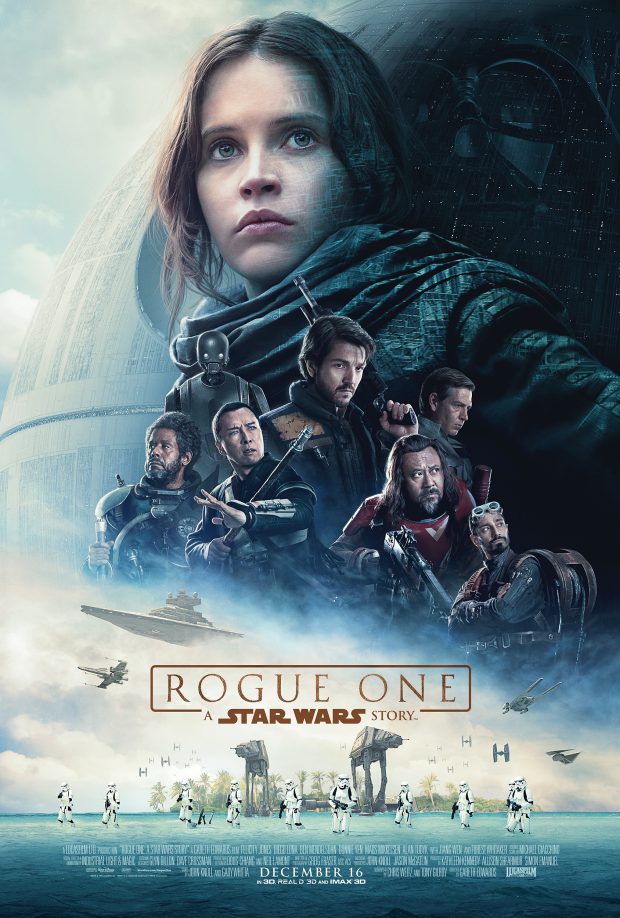 Is Rogue One a story worth telling? That’s the main question that hangs over this film. I would say that it is as the details around the Rebels gaining possession of the Death Star plans are wide open for interpretation. We can infer that a lot of sacrifice was involved but we only see the aftermath so there are people involved who arguably deserve to have their story told.

For the most part the story is a compelling one and does feel like a legitimately different experience than the main series Star Wars films. All 7 of them have a old fashioned adventure vibe in the style of something like Flash Gordon where this has a grimy World War II adventure quality to it. The closest comparison I can make is The Guns of Navarone but that’s not an entirely fair one either. Basically it’s not a typical Star Wars film in terms of style and that can feel a little jarring at first. We’re used to Star Wars looking a certain way, sounding a certain way and following a familiar structure but this doesn’t happen here and it’s easy to think that it isn’t working as a result.

I hate to use the word “gritty” as it seems to be a catch all description for how to tell stories these days but it’s a good description for the overall tone of this film. One thing I really appreciated is that this film doesn’t try to convince the viewer that the Rebellion are self righteously heroic. You could be forgiven for feeling that way in the main series films because of how strong the “good vs. evil” message is but this film tells us that War is dirty and people have to do things they aren’t particularly proud of.

There are characters in this film who do some really extreme things in the name of survival and it’s very jarring in a good way. I got the sense that lots of the characters were living with guilt after compromising their own morality and this grounds the experience of fighting a War in a sense of realism that all other Star Wars films lack.

It was certainly something that I had to get used to and the film doesn’t allow for any time to let that sink in since it basically hits the ground running in telling its story in its own way. By midway through the second act I was on board with how the film was set up and I think repeat viewings will be easier to take since I’ll be prepared for it. That doesn’t mean I wasn’t enjoying the film up to that point but there was an adjustment period. This is a really hard thing to describe but viewers will probably know what I mean once they see it for themselves.

On the whole the film does a good job of standing alone. It has a beginning, middle and end. The story is focused on the characters that the film introduces and the objective is clearly laid out from very early on. Do you need to have seen the main series films to enjoy this one? In my mind you definitely don’t but you do have to be willing to just go with it as there isn’t much time spent world building for new viewers.

This has always been a universe that has felt lived in and this film continues that trend with the characters inhabiting their various corners of this universe with little to no explanation of how they got there. I was fine with this partly because I understand the universe that this is set in but I also like it when world building is accomplished without exposition. There’s enough going on to get a feeling of how the world works in the context of this story.

There are some notable exceptions that would definitely sink into spoiler territory. I’ll just say that they come in the form of references to the other Star Wars films that feel shoehorned in a lot of the time. Some of them are subtle and made me chuckle at just the right moment but others are awkward and overt. There were obviously going to be references here and there but some could have been handled better.

A story is nothing without characters and Rogue One has some good ones. Jyn Erso (Felicity Jones) is the main focus here and she carries the film very well. Felicity Jones is excellent at bringing across a character who has learned to survive on her wits and has trouble connecting with other people. Her life experience has taught her to rely only on herself which makes her interactions with the other characters feel distanced in the early parts of the film. She has a deep connection to the events of this film that help make the events feel more personal than the high stakes that are really represented. Jyn is a fine addition to the Star Wars canon and the fact that she’s doesn’t have any ties to the mythological aspects of the universe is really refreshing.

Cassian Andor (Diego Luna) has almost as much screen time as Jyn but strangely he remains largely underdeveloped. He has a really powerful exchange with Jyn at around the halfway point that works brilliantly but other than that he doesn’t have much to do beyond deliver some humour and behave competently in the various missions.

Alan Tudyk steals the show as the wisecracking droid K-2SO. The character isn’t well developed either but doesn’t really have to be. He provides welcome comic relief without it ever feeling overwhelmed. It helps that he’s also very useful when it comes to the various set pieces.

The other characters are fine and fill up the ensemble capably enough but suffer from being underdeveloped. I could see hints of interesting things about them but not enough time is spent getting to know them so their potential goes unfulfilled.

Ben Mendelsohn’s Orson Krennic is what passes for the main villain of this film and he comes up majorly short. He disappears for long stretches which doesn’t help and seems to lack competence as well as confidence when he is on screen. He shares scenes with other notable Star Wars villains that will be familiar to fans and can’t hold a candle to any of them. If he had been better written and featured more then it’s possible that he could have been memorable but as we see it he comes up short. 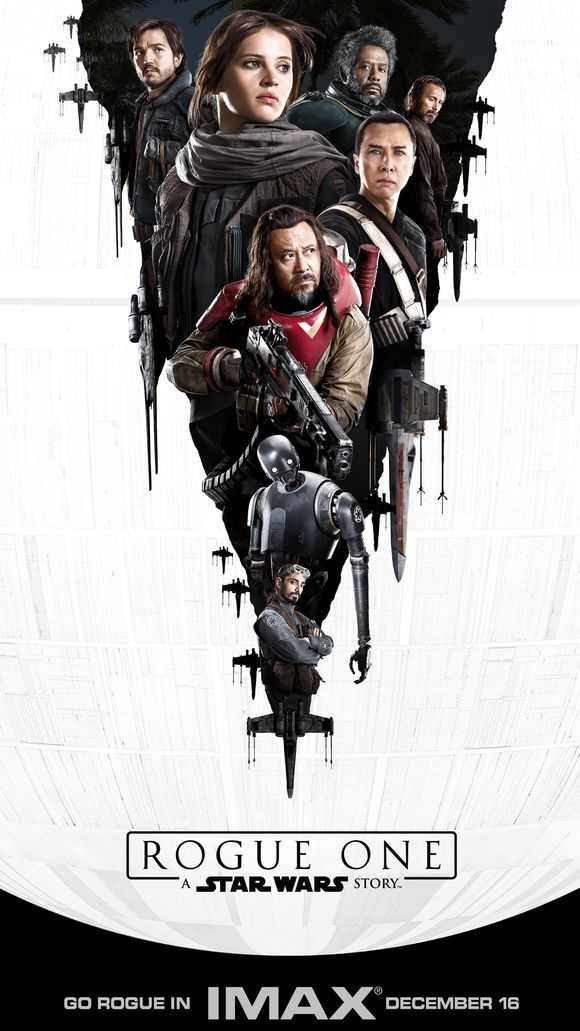 it so I will. Darth Vader is in this movie and he doesn’t have to be. Don’t get me wrong, it is always cool to see Darth Vader as he is one of the best characters ever put to film but there’s no real purpose to him in this particular film. He only appears in two scenes and one of them does have a crowd pleasing moment for him but it might have been better for this film to focus on its own characters rather than clearly showing how most of them pale in comparison to Darth Vader.

Star Wars is renowned for its action sequences and this film is no exception to that. There is a massive sequence in the third act that is absolutely breathtaking from the visual effects to the jeopardy experienced by the characters. One thing that always comes across is the sense of scale within these action sequences. We often see just how big a threat is in comparison to those facing it and the action is always easy to follow.

There are plenty of breathtaking visuals that show off the locations used or remind viewers how imposing the Death Star can be. In general the film definitely is a visual feast that definitely deserves to be seen on the biggest screen possible.

Some of the CGI is a little dodgy. In order to bring back characters played by actors who have either passed away or aged beyond the point of being able to play their younger selves again the de-aging technology that you may have seen in Tron: Legacy or Terminator: Genisys is used and it looks a little ropey. It is distracting but this technology is relatively new so if film makers don’t keep experimenting with it then it’ll never get better so I can’t hold it against this film too much. Having said that it does distract and create some unintended humour.

An entertaining entry into the Star Wars canon that feels different enough to come across as interesting. The story stands alone for the most part other than some out of place references here and there and the characters are well played if a little underdeveloped. The visuals are absolutely breathtaking with action that’s easy to follow and a constant sense of scale that works really well. Some ropey CGI is a little distracting but it’s not something that holds the film back too much.