A group of people seek refuge following a brutal attack and find themselves stalked by a mysterious and lethal force in Simon David Kay’s Shadowland.

Billed as an action horror, Shadowland follows Cam (Ben Keenan); an ex-serviceman turned bodyguard who recruits Elaine (Amelia Eve) to assist with a job escorting an Ambassador (David E. Grimes) and his family to a function in rural Scotland. What should be an easy paycheck quickly becomes a fight for survival following an attack that forces them into less than ideal circumstances. The setup is a proven one with a group of characters tested to their mental and physical limits as they simply try to survive the night with the odds stacked against them. 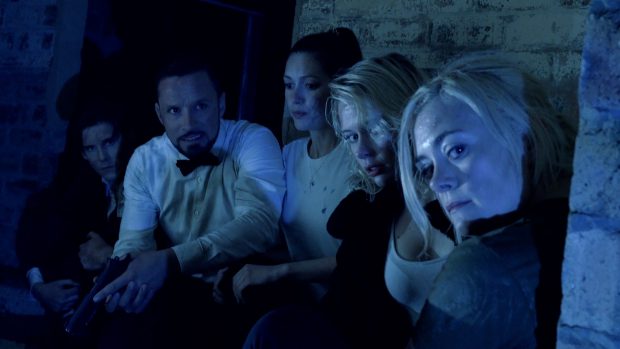 Plenty of time to get on each other’s nerves

The focal characters are Cam and Elaine who take the lead when it comes to the action with Dillon (Rebecca Finch) doing the lion’s share of the work representing those that need protected. Once the main thrust of the film is established and the characters settle into their roles in the situation the whole thing comes together well. Their personalities are distinct and the script keeps the overriding urgency at the forefront. The more they learn the more they have to fear and the more the audience is encouraged to drink in the tension along with them. The terror is in what isn’t seen and the near constant threat of an attack coming from something unnatural.

Horror is a genre that thrives under budget limitations with filmmakers routinely finding innovative ways to manufacture scares when working with very little. Shadowland attempts to work around its limitations by working on building tension and suspense between characters in a confined location. Resolve is tested and impatience becomes a dangerous enemy the longer the holding pattern persists. The more they learn the more they have to fear and the more the audience is encouraged to drink in the tension along with them. Some of the strongest moments are to be found in people simply trying to bide their time as they become more hostile to one another and mistakes start to be made. A great fixture in helping all of this along is the enigmatic Kane (Tony Greengrass) who knows all the answers but only gives them at his own pace which only intensifies the frustration felt by the others. The film makes great use of this mysterious presence and the payoff to what he represents is fairly satisfying.

The storytelling is confident and deliberate with time taken to set up the scenario, introduce the characters, build what appears to be an unconnected narrative and set things in motion following establishing the necessary elements. The rural Scottish setting is used really well to create a sense of isolation and the overall sense that the civilised world is very far away though it is out there as is alluded to periodically. This is central to the ongoing tension and the setting compliments that nicely. There are some pacing issues in the early part of the film but once the plot kicks in it moves at a solid clip and never lets up when it builds up steam. Keeping the audience feeling tense is the main goal and it is mostly achieved.

Building and maintaining atmosphere is something Shadowland does very well but it is let down somewhat in a few areas. There are too many characters to be adequately sustained by the lean running time. There just isn’t enough opportunity for their personalities to shine through as well as they could if there were less voices. A talented cast do very well with the material with Ben Keenan, Amelia Eve, Rebecca Finch and Tony Greengrass being the obvious standouts. Each of them have strong presence and are believable throughout but a less cluttered roster would have provided them more opportunity to show what they are capable of. The action also suffers most likely due to a budget that is unable to match the ambition. There’s a strong sense of what is being attempted but the resources just aren’t there to make it a reality. 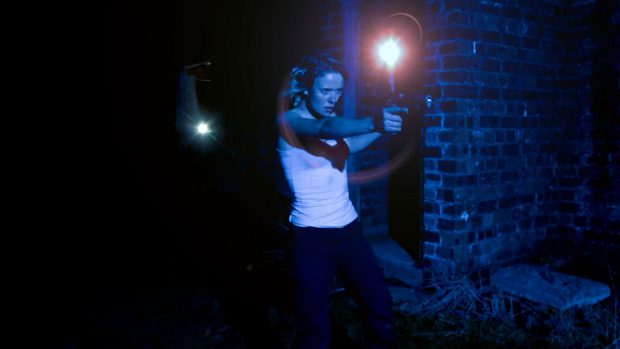 A promising debut that excels in building a tense and suspenseful atmosphere, uses a talented cast well and takes full advantage of the unique setting. Much of the film is focused on the characters biding their time and growing progressively more frustrated with the situation as well as each other. This helps to heighten the tension greatly and the actors successfully convey their deteriorating resolve. There are instances where the budget resources are unable to keep up with the ambition and there are too many characters to let personalities shine as prominently as they should but the elements come together well to form an engaging viewing experience.