Shang-Chi and the Legend of the Ten Rings

The Marvel Cinematic Universe welcomes a new hero in Destin Daniel Cretton’s Shang-Chi and the Legend of the Ten Rings.

It feels like the MCU is in a transitional phase at the moment. Some of the signature actors have moved on in the wake of Avengers: Endgame and taken their characters with them so if the MCU is to persist then new blood is required. Fortunately there are decades of comics to draw on containing a massive amount of characters so there is no shortage of inspiration. Shang-Chi is the first in what is sure to be a long line of newly adapted characters and he definitely makes an impression. 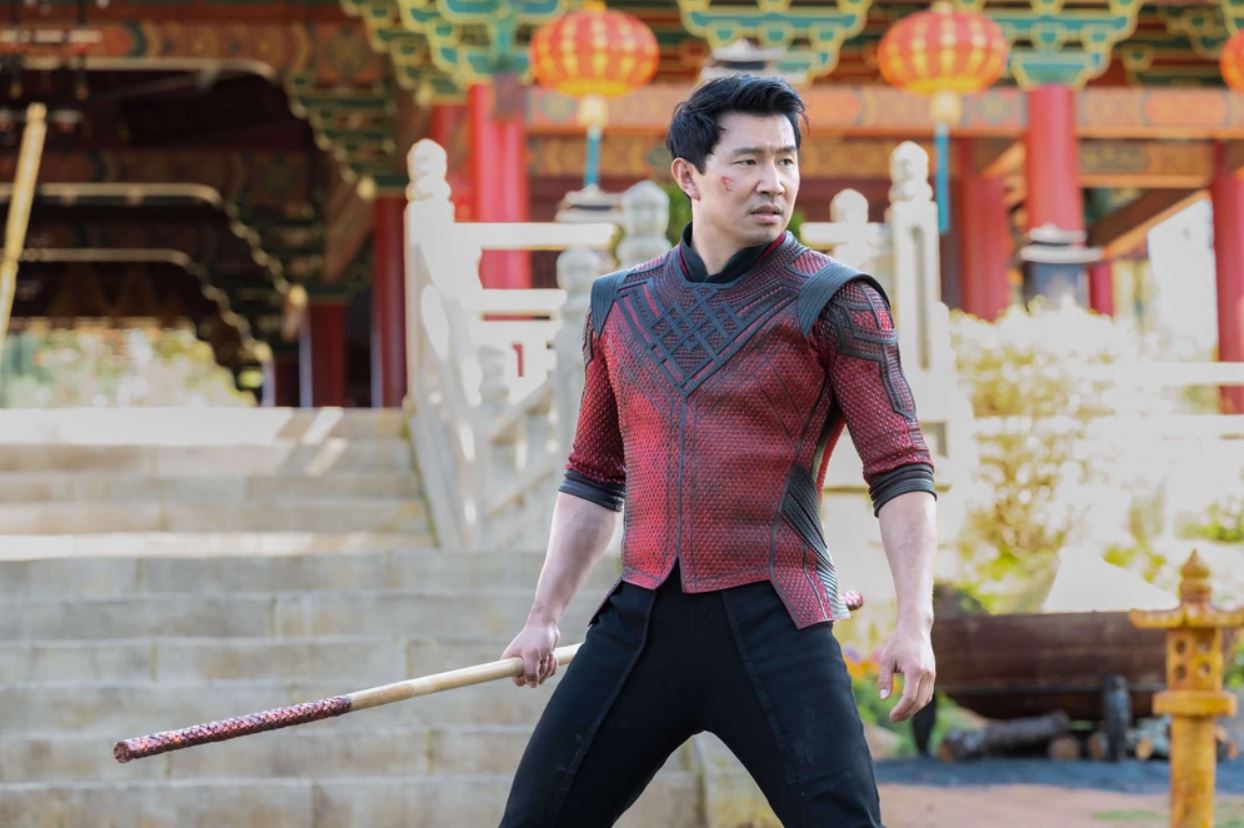 Shang-Chi -or Shaun as he goes by for a while- (Simu Liu) starts the film as seemingly directionless, working as a valet with his best friend Katy (Awkwafina) while filling their free time with karaoke and drinking. This status quo is quickly shattered when Shang-Chi’s past catches up with him and he has to face the reality of his family history before he can truly begin his life.

His character journey is a familiar one. He is drawn into a situation and has to find purpose within that before deciding what it is he wants to do with his life. As is often the case in narratives like this he’s reluctant to be involved but has the skills and overriding sense of responsibility that means he really can’t help himself. The film wastes no time in establishing that he’s running from something and slowly fills out the context of what that is as it progresses. In a way the storytelling compliments Shang-Chi’s internal processing of his past and how he needs to deal with it.

Simu Liu is perfect in the lead role. He’s likeable, charismatic, charming and more than capable of delivering when emotional heft is required. He transitions naturally from sarcasm as a defence mechanism to feeling the weight of loss or responsibility as the scene demands. His physicality is excellent as shown in the abundant action sequences that the film offers. This marks yet another example of the perfect marriage between character and actor in the MCU. Shang-Chi is constantly engaging and a presence that promises to be a strong fixture in the future of the franchise.

The movie excels in the depiction of Shang-Chi’s friendship with Katy. Right from their first interaction it comes across as an enduring lived in connection that has been cultivated over a long period of time. Katy mentions knowing him for half of his life which is an unnecessary statement as it can be easily gleaned from context just by watching their back and forth. She acts as a pillar of stability for him as he is taken through an intense magical journey and is often used to diffuse the grandiose mythology by pointing out how outlandish it is. This is a gag the film leans on too many times -along with other comedic tricks- but it’s a fun character detail that is used well for the most part.

Katy isn’t entirely a supporting player as she has an important role in the film that mirrors Shang-Chi’s arc. It’s established early on that she is also directionless having failed to turn her hand to something that allows her to live up to her obvious potential so her arc is about finding out what she wants to do. It isn’t as definitive as it is with Shang-Chi but it’s definitely there and works well. Awkwafina is excellent with near perfect comic timing and a natural rapport with any other actor she shares screen time with. Like Shang-Chi she’s bound to be a significant player in the future of the franchise.

Another supporting character is Shang-Chi’s sister Xialing (Meng’er Zheng). She’s an engaging character when she appears and the coverage of her back story as well as her complex motivations is really strong but she largely exists as an enabler for her brother’s arc where she definitely had the potential to be more significant. Family is a major theme the film explores but the focus is largely on Shang-Chi with Xialing coming into it when it’s relevant for him. She does have moments that hint at her own story playing out but they’re little more than that and quickly fade into the background in favour of Shang-Chi’s journey. There was a real opportunity to explore the brother and sister as two sides of familial expectation but unfortunately not enough is done to capitalise on that despite the clear potential.

Put a ring on it

Shang-Chi and the Legend of the Ten Rings stands out in that it doesn’t have a villain in the traditional sense. Wenwu (Tony Leung) is Shang-Chi’s and Xialing’s father. He is a complex character with understandable motivations and a rich back story. Some of the best scenes are when he is simply talking to his children about choices that have been made, the regret associated with the loss of their mother and the burden of living such a long life. He functions as an obstacle to be overcome, a relationship to be nurtured and a potential warning of Shang-Chi’s future. Tony Leung plays the character with authority tempered by believable vulnerability. The performance fleshes out the character immensely and the detail of his history that focuses on his emotional connections brings real heart to him.

Wenwu’s relationship with Shang-Chi -and to a lesser extent Xialing- brilliantly explores the idea of feeling trapped by parental expectation. As mentioned above, Shang-Chi’s arc is about finding purpose and part of that is figuring out whether that means pulling away from what his father wants from him or forging his own path. Parental relationships can be very tricky and the film constantly reinforces that such as when Katy is being berated by her family for not amounting to anything. The same applies to Wenwu and Shang-Chi as there is an expectation on Wenwu’s part that his son would follow in his footsteps. The reason the film begins with Shang-Chi separated from his father is because he was granted the time to gain perspective before being forced back into what his father wanted from him. Shang-Chi needs to prove to his father and himself that he is his own man who doesn’t need to do what is expected of him. This fuels their conflict and works brilliantly. As said, this could and should have been enhanced with Xialing’s perspective but what the film provides is compelling, heartfelt and strongly developed.

The action sequences are among the best that the MCU has provided. Clear inspiration has been taken from Hong Kong action cinema and it’s blended perfectly with the high octane over the top set pieces that the MCU has become known for. The fight choreography is first rate and is often complimented by stunning visuals surrounding it. Highlights include a hand to hand sequence on a moving bus and a perilous battle on scaffolding. The third act sequence is heavy on CGI but uses it well to provide impressively creative visuals that highlight the potential of the magical additions introduced throughout. A slight disappointment is the Ten Rings themselves as they have been reduced to vague energy emitting magical objects that can also be manipulated physically but perhaps this a necessary change to avoid comparisons to the Infinity Stones. They are impressively used in the various sequences complimenting the physical combat brilliantly.

With this being an entry in the Marvel Cinematic Universe there are connections to the wider continuity. Those connections are slight -mostly coming in the mid credits scene- and don’t intrude on the character driven narrative that is playing out. The film adds further texture to the MCU as a whole by introducing a hidden world full of wondrous mythological creatures, the suggestion of a major threat looming somewhere unknown and a great deal of mythology that can be expanded on over time. Shang-Chi and the Legend of the Ten Rings further demonstrates Marvel’s ability to develop the wider universe without it drowning out the story being told or the characters that tell it.

An excellent entry into the MCU with great characters, strong performances, impressive worldbuilding and engaging themes. Shang-Chi is a great character wonderfully played by Simu Liu with a familiar yet engaging character arc around him finding purpose and wrestling with parental expectation. Katy is more than just a supporting player with a strong arc in her own right and her friendship with Shang-Chi being wonderfully natural. Xialing is an engaging character but suffers from being pushed into the background meaning her presence is more to enable her brother’s arc. Tony Leung’s Wenwu isn’t a simple antagonist; he factors into the narrative brilliantly and is excellently portrayed by Tony Leung. The action sequences are excellent with impressive choreography, creative visuals and a variety of set pieces. The worldbuilding is done well without compromising the story being told and adds a great deal of mythology that can be played with over time.