Oliver Stone’s Snowden tells the story of infamous NSA employee Edward Snowden and what led him to expose the surveillance techniques employed by the United States Government to the public.

This is a story that is still very much going on so making a biopic about it at this stage seems somewhat baffling since the real Edward Snowden has never really been made to answer for what he has done in a “fair trial” as the film points out so this actually feels like it’s a few years off from being a complete story. I’m not lobbying that as a criticism but it is worth mentioning.

It is a story that is very much worth telling and Oliver Stone seems like the ideal man to tell. What he delivers here is a broadly factual account of what led to Edward Snowden releasing these secrets with some attention paid to the aftermath and the results are something of a mixed bag.

Don’t get me wrong, I found this film to be immensely enjoyable. It looks great while being mostly well paced save for some lag in the middle and the cast all do a really good job. Joseph Gordon-Levitt in particular shines in the lead with an uncanny resemblance to the real person that becomes apparent in the closing minutes of the film. He does a really good job portraying Snowden as a complex and well developed character who has very clear motivations. 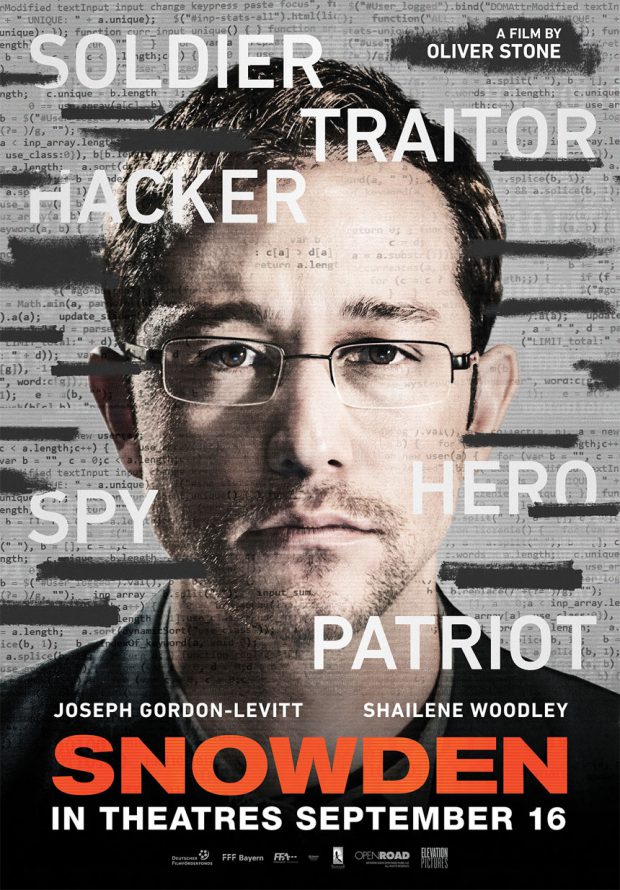 The journey he takes is a compelling one and the audience is along for the ride every step of the way. We see his short career in the army followed by his progression through the NSA’s intelligence network in a lot of detail. His reaction to the invasion of people’s privacy and how casually it is employed tells us all we need to know about what this film is about. I really liked how he became more disillusioned as time went on and felt that he had to take a stance.

One problem this film has is that it feels a little one sided. Everything is from Snowden’s perspective so it makes sense to an extent but everyone who is against Snowden is depicted as an enemy with no middle ground being found to help see the other point of view. The United States government are routinely demonised without any counter argument that might make the audience think that this could be a complex issue.

If this is Oliver Stone’s stance on the issue then he is perfectly within his rights to make a film that brings across his point of view but the lack of balance makes the whole thing feel oddly one dimensional and it’s almost as if there is a fear of the audience not agreeing with what the film has to stay. I’m usually more appreciative when a film encourages me to make up my own mind about things so I fond this somewhat jarring.

Paranoia is definitely the name of the game here and that does come across well. The growing sense of unease that Snowden feels comes through clearly and is shown in several very effective ways as Joseph Gordon-Levitt internalises the struggle Snowden has with accepting everything that is going on around him and the accountability he has for a lot of it.

Moments like this are somewhat rare and don’t tend to apply to the other characters. The account is mostly a very factual one and people who aren’t Snowden come across feeling really underdeveloped. This is most evident in his relationship to Lindsay Mills (Shailene Woodley). Their relationship works well enough in terms of the chemistry of the actors but the film doesn’t really show us the moments that make them important to one another. Most of those happen off screen and it feeds into the film’s tendency to stick to the facts rather than the emotion behind the facts.

There are characters that work well within the factual framework. Corbin O’Brian (Rhys Ifaans) has exactly the role he needs to and the moment their relationship turns sour is really effectively handled. Similarly Nicolas Cage’s Hank Forrester doesn’t overstay his welcome in terms of the influence he has on Snowden’s career.

The structure of the film was quite inventive with Snowden recounting his tale to Laura Poitras (Melissa Leo), Glenn Greenwalt (Zachary Quinto) and Ewen MacAskill (Tom Wilkinson) before shifting gears to the reaction flooding in gradually. This does allow Snowden to be a bit of an unreliable narrator which accounts for some of the bias but it is still jarring. The scenes in the hotel room were very effective as it shows Snowden at the peak of his paranoia as he tells the story of how he got to that point.

A compelling film that is well cast and well paced but feels somewhat one sided in its approach to the issues. Joseph Gordon-Levitt is note perfect as Edward Snowden and the story is told in a really stylish way but the other side of the issue isn’t represented at all which makes it feel somewhat jarring. Many of the characters outside of Snowden are underdeveloped and the story is told in a broadly factual way which lets it down slightly. Snowden himself is well developed and the sense of paranoia comes across brilliantly but I would have liked the story to be told in a more complex way.