The Star Wars franchise delivers the backstory of iconic scoundrel and smuggler in Ron Howard’s Solo: A Star Wars Story.

Prequels are a tricky business because storytellers have to sell an adventure that audiences will already know about in a broad sense. The Star Wars franchise has a troubled history with prequels thanks to the prequel trilogy being unpopular with critics and fans alike. Rogue One: A Star Wars Story managed to tell a story that fans new the outcome of while supplying a different spin to it but this film comes with a lingering question over whether a Han Solo origin story is worth telling.

Having seen the film I’m still not convinced that it was because this outing did little to make me feel that its existence was justified. When the film was announced I felt that this would be a tick box exercise covering the major events in Han’s life that had already been mentioned in other films and that’s largely what is delivered. It isn’t quite as bland as that but there are few surprises and very little learned about the character that wasn’t previously know.

The film begins on an industrial planet controlled by the Empire where the young Han Solo (Alden Ehrenreich) and his girlfriend Qi’Ra (Emilia Clarke) have dreams of getting off the planet, getting a ship and making their own mark on the galaxy while answering to no-one. Their escape attempt has them separated and Han embarks on a relentless quest to come back and rescue her. From here the film accelerates us through what fans will have long imagined such as meeting Chewbacca (Joonas Suotamo), winning the Millennium Falcon and completing the infamous Kessel Run in 12 parsecs while explaining why the unit of distance is used rather than time.

It’s all relatively serviceable if bland storytelling that entertains at times but never rises above the sum of its parts. The main problem is that the film never actually manages to be about anything. It isn’t about Han Solo deserting the Empire because he thinks his own way is better -though that is part of it- nor is it about him realising that his friendship with Chewbacca is a more powerful asset than being the detached loner that seems to come with this territory so the narrative suffers from a lack of identity. It is just a story about Han Solo gaining pretty much everything he’s known for and it turns out that most of the significant events that fans will know about happen over the course of a few days. I would have liked to see more of Han trying to be an Imperial pilot and exploring why that life didn’t suit him or more of what motivates him to be an outlaw but there’s no detail given about anything that goes on and that’s a definite weakness.

Another issue is the pacing; long stretches of the film feel like a complete drag and certain things that happen feel like they only exist to move the plot along after languishing for a long time. There is also some clumsy foreshadowing that will confuse fans who have only seen the films as well as fans who have made peace with what Lucasfilm considers to be Star Wars canon. To say more would be a spoiler but you’ll know the moment when you see it and your reaction will likely depend on how much you’ve bought into the current iteration of the Star Wars canon. 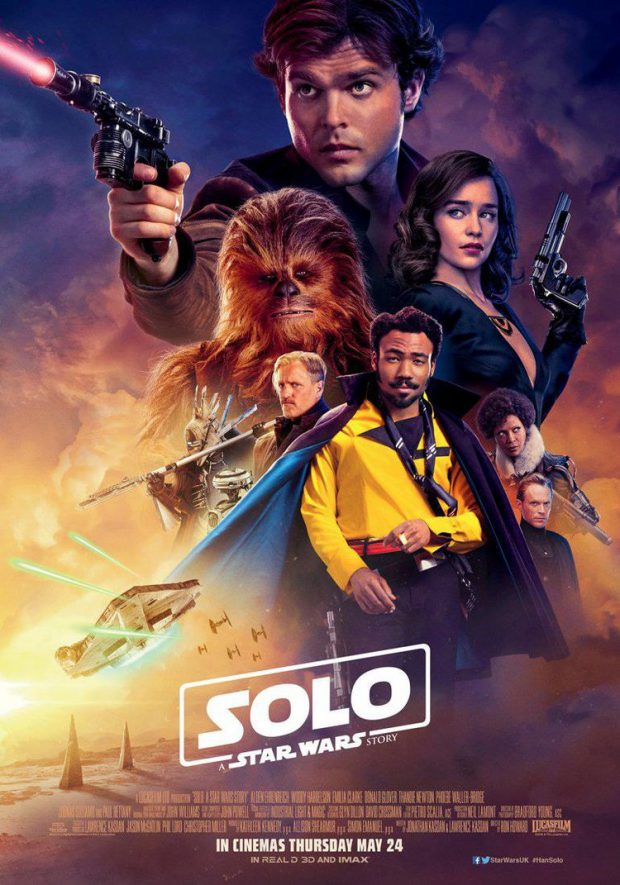 Alden Ehrenreich is a fine actor who does well here but I never got that Han Solo vibe from him. He nails the cheeky and charismatic youth persona but never quite brings across the hardened edge that Harrison Ford made iconic. It’s great that his performance isn’t an impression of his predecessor but at the same time there’s little to identify him as Han Solo so there’s a lack of balance between seeing a different side to a familiar character and the traits that made him iconic in the first place. As a charismatic and somewhat naive wannabe smuggler Ehrenreich is excellent and I wonder if I would regard this portrayal more favourably if he wasn’t playing Han Solo.

Faring far better as an earlier version of an established character is Donald Glover’s Lando Calrissian; a role previously played by Billy Dee Williams. From the first second he appears Glover nails Lando’s charming arrogance and swagger in a way that’s recognisable but different. Unfortunately his screen time is minimal but what he does have is really memorable. A Lando Calrissian prequel might have been a better choice because far less is known about this character so there is more story to tell and more scope to deliver audiences something they aren’t familiar with.

The rest of the cast are a mixed bag. Emilia Clarke suffers the same fate so many female characters in films like this do. There’s nothing that really defines her in the context of the story other than being the prize that Han Solo has to win. Her role and personality changes from scene to scene including damsel in distress, capably deceitful criminal, idealistic romantic and femme fatale. None of these take hold as being who Qi’Ra is so her role in the story is very much an afterthought. Emilia Clarke does a fine job of the material she is given and has great chemistry with Alden Ehrenreich that helps make their relationship mostly believable but it doesn’t disguise the fact that she’s a poorly written character.

Woody Harrelson plays Han’s mentor Beckett. He’s the representation of what Han Solo will one day become once his youthful optimism is washed off by an unforgiving cut-throat galaxy. Harrelson does a good job in the role but the character is thinly developed which means that certain things in the story don’t work as well as they’re supposed to. More time should have been spent on his relationship with Han to emphasise the lessons he learns while working with Beckett but the film only does enough to make any given scene work before moving on.

Paul Bettany impresses as career criminal Dryden Vos but suffers the fate many of the other characters do. Any time he’s on screen his presence is imposing and there is a real sense of him being dangerous and well connected but as the main villain of the piece he comes up short. Part of that is down to him not being in the film enough to cement himself as the central antagonist but it also has a lot to do with not spending enough time establishing what makes him such a threat. The film tells us why he’s dangerous but never really shows us so the threat value never really comes across.

Joonas Suotamo bears mention in the role of Chewbacca. Naturally it’s a very physical role since he doesn’t speak English and he does a great job with it. Peter Mayhew had a definitive way of moving while in the suit that injected the required personality into the character and Suotamo does the same thing which makes it entirely believable that this is the same Chewbacca that audiences have always known. The film spends a great deal of time with him and does well showing his friendship with Han grow naturally. Seeing the beginnings of that connection is one of the highlights and is handled believably.

Visually the film is very impressive with some memorable sequences and well designed locations that feel recognisably Star Wars while being new in their own right. The highlight for me was the Kessel Run sequence depicted in the trailers showing Han’s legendary piloting ability and delivering a great deal of excitement combined with nods to John Williams’ iconic score. A train robbery numbers among the film’s other impressive moments and there are some low key shoot-outs adding variety while serving as a reminder that Han Solo is a small scale smuggler who won’t always be involved in giant set pieces.

A serviceable if bland entry into the Star Wars canon. The plot plays out as little more than a tick box exercise showing the origin of everything told about Han Solo in other Star Wars films. Unfortunately the film never delivers more than the sum of its parts and does so in a really disjointed, poorly paced way. Alden Ehrenreich is a fine actor who never gives off that Han Solo vibe though does impress as a charismatic and naive wannabe smuggler. Emilia Clarke’s character changes from scene to scene lacking definition as she goes, Woody Harrelson is fine but underdeveloped and Paul Bettany impresses but fails to solidify himself as the central antagonist the film wants him to be. Donald Glover’s Lando Calrissian is the highlight though suffers from a lack of screen time. The film is visually impressive with the Kessel Run sequence being particularly noteworthy along with a train robbery and various shoot-outs throwing in some variety. The design of the locations feels recognisably Star Wars while also being unique and interesting in their own right. On the whole it’s a competently directed and acted film but doesn’t deliver any deeper insight into Han Solo’s character nor does it manage to rise above the fact that it’s a prequel telling a story we already know.