The speedy blue Hedgehog returns for another high octane adventure with more threats to deal with in Jeff Fowler’s Sonic the Hedgehog 2.

Video game to movie adaptations have a deservedly poor reputation. Many of them are of poor quality but there are some that break the pattern. Sonic the Hedgehog was one such example and the marketing for the sequel suggested there was a commitment to deliver more of what fans love about the iconic video game franchise. Fan service can be a double edged sword as deploying it poorly reeks of pandering but when woven naturally into the narrative then the end result can be a fun time that respects both the source material and fans of it. 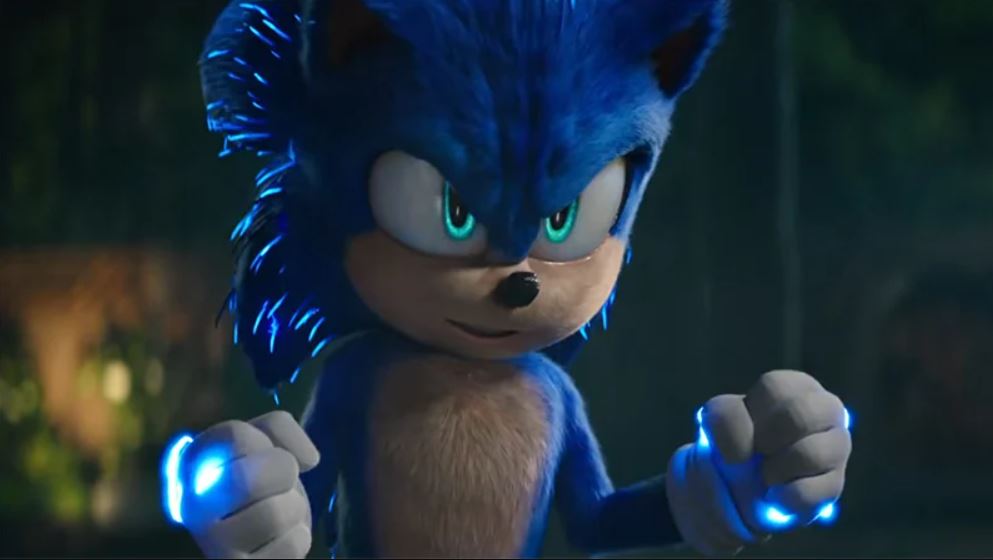 Sonic the Hedgehog 2 picks up some time after the first with the titular character trying to find his place in the world. He spends his nights trying to be a superhero but lacks the finesse to pull off saves without significant collateral damage which leads to a pep talk from adopted Dad -of sorts-, Tom (James Marsden) who tells him that his hero moment will come but he can’t force it. This sets up an arc around Sonic living up to his potential as a hero that gets mixed up with him recognising that he shouldn’t try to force growing up. It’s muddled but the progression is clear and it works in context as long as you don’t think too much about at what stage of maturity Sonic is supposed to be. The first film had him as an adult -albeit suffering from arrested development- to Tom where this film positions him as more of an adopted son. It is inconsistent but this outing rolls with what it decides the dynamic is.

Ben Schwartz continues to be great as Sonic. He manages to not fall into the trap of making Sonic’s extreme personality obnoxious He juggles the comedic delivery with more heartfelt moments brilliantly and imbues Sonic with a loveable earnestness that more than carries the film. As a performer he is given far more to work with than in the first movie and seems to be far more at home with the character. The writing supports this with greater depth given to him and more variety to the character.

Joining Sonic is his trusty sidekick Tails (Colleen O’Shanussy); who travels through a portal to help his hero. The Sonic/Tails dynamic is a lot of fun with Sonic taking on a mentor role and coming to realise that being a hero comes with significant responsibility; something he should surely understand given the abundance of pop culture references. Knowing and understanding are two different things so, through Tails, Sonic is faced with someone who looks up to him and has to internalise a lesson that has him understand what it takes to live up to that heroic perception. Tails himself is thinly written but fills his purpose as the technical support and general sidekick.

On the villain front there is the returning Robotnik (Jim Carrey) and the misguided Knuckles (Idris Elba). Jim Carrey’s manic energy remains as watchable as ever even if Robotnik never comes across as a significant threat. He is somewhat diluted by the presence of Knuckles but his larger than life presence goes some way towards correcting it. Idris Elba’s Knuckles steals the show; his simplistic outlook on the world around him and taking everything presented to him far too literally is the source of a lot of comedy throughout. Idris Elba’s performance is excellent; adding a lot of heft to Knuckles as a character.

The storytelling is uneven with a lot of lag in the second act. A subplot where Tom and his wife Maddie (Tika Sumpter) attend the wedding of Maddie’s sister, Rachel (Natasha Rothwell) takes up far too much time. The attempted Indiana Jones quest that Sonic and Tails embark on drags and the dance battle isn’t as endearing as it’s clearly supposed to be. An exciting third act is largely worth the wait though that also suffers from bloat in places.

An undeniable effort is made in this film to deliver fan service to those familiar with the games. It features Tails, Knuckles, the organisation Guardian Units of Nations -or GUN for short-, the Master Emerald and other references to video game elements. Audiences would be forgiven for assuming that the fan service would be relentless and get in the way of the storytelling but fortunately that proves to not be the case. They are either subtle enough to breeze by unnoticed to those less familiar with the source material or organically woven into the narrative without overpowering it. This is a difficult balance to strike but Sonic the Hedgehog 2 does so effortlessly. References are rarely overt and the story is cleverly constructed around the familiar elements feeding into it.

The set pieces are impressive with great use made of the abilities of the three animated characters. There is a distinct emphasis on fun but there’s a good amount of peril to be found in various sequences. Stakes are raised believably but the threat level never strays into the realm of being unsettling to younger viewers. The movie is unmistakably aimed at kids but there’s plenty in there for adults and long time fans of the character of Sonic the Hedgehog.

Ready to serve up a knuckle sandwich

A fun blockbuster with strong vocal performances, entertaining set pieces and an impressive command of fan service. Ben Schwartz continues to excel in the lead role with strong writing supporting his performance through greater depth. His central arc is muddled but consistent enough in context to carry the film. The Sonic/Tails dynamic is engaging and clearly presented even if Tails doesn’t have a lot of depth on his own. Jim Carrey is great as Robotnik with his manic energy disguising the fact that he rarely comes across as a credible threat. Idris Elba’s Knuckles steals the show. The storytelling is uneven with some lag in the second act but the climactic third act is mostly worth the wait and fan service is deployed really well; it’s organically woven into the narrative without ever overpowering it. The set pieces are impressive with great use of the abilities of the three animated characters. Stakes are raised believably bit the threat level never strays into the realm of being unsettling to younger viewers. The movie is unmistakably aimed at kids but there’s plenty in there for adults and long time fans of the character of Sonic the Hedgehog.