A musician who finds himself dead on the eve of the biggest opportunity of his life must find his way back to his life in Pete Docter and Kemp Powers Soul.

Pixar continue to be the gold standard in both animation and storytelling. Most of their films tell compelling, ambitious and thematically rich stories that always focus on the characters in a really intimate way. Other examples of greatness from them include Onward and Inside Out; both of which deal with big ideas in really clever ways. Soul is much more than you think it is if you’ve seen the trailer. Most of the content in there comes from early in the film and really doesn’t scratch the surface of what it’s really about. Since going into detail would constitute a major spoiler this review will be vague on the details not contained in the marketing because this truly is best experienced without any prior knowledge of what to really expect. 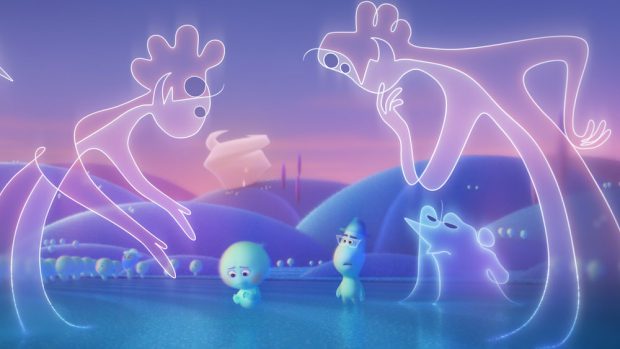 “The Great Before” in all its glory

As the trailer indicates, Joe (Jamie Foxx) is a Jazz Pianist who hasn’t had the greatest of success achieving his dream but forges ahead determined that perseverance will one day get him there. Some success comes his way and the excitement associated with him causes him to be careless which leads to an untimely death for him. Following his death he finds himself separated from his body and heading into the “Great Beyond” but he’s unable and unwilling to accept that his life has ended so does everything he can to force himself back into his body so that he can enjoy his hard fought success. Along the way he is tasked with mentoring a wayward soul hard set against living on Earth known only as 22 (Tina Fey); together they embark on a journey that prompts both of them to understand what it truly means to be alive.

This film has a lot to take in and has a lot of elements thrown in vying for attention. At times it can be overwhelming and they don’t mix together perfectly in all instances but it is full to bursting with creativity on every conceivable level. The visual aesthetic to the “Great Before” -where Joe spends most of his time trying to get back to Earth- is minimalistic yet iconic with everything clearly presented and a lot of stunning visual flourishes that illustrate the point being made brilliantly. The design of the souls is simple and cute while conveying a lot of emotion through expression and movement, the landscape is detailed without being cluttered and the other character designs are equally creative.

Some time in the film is explaining the mechanics of how this particular world works and in all cases it is done so organically with fun comedic asides designed to provide examples peppered throughout. What could have been a clumsy info dump is instead elegant worldbuilding. At all points the attention is on Joe and how he reacts to what he’s learning while reinforcing his desire to have no part in it. It really sells the denial and determination that forms the root of his character while setting up the journey that he has to take towards the inevitable lesson that he will eventually have to internalise. 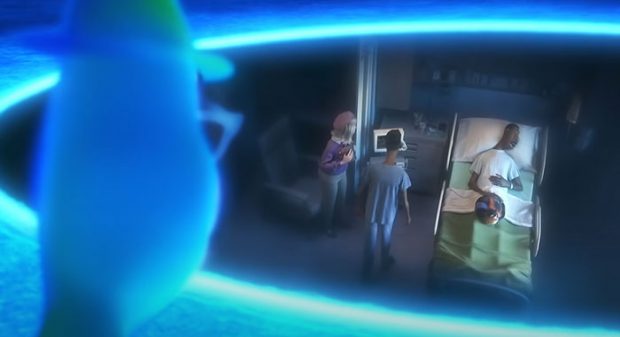 Has my life ended?

Soul is carried by Joe and 22 who have a really interesting relationship that plays out in unpredictable ways. It starts off looking as if Joe will teach her to accept the need to live and she will teach him to accept the inevitability of death. To an extent that is what happens but there’s also so much more to it than that. 22’s perspective also helps Joe realise how little in his life he actually appreciates and he is made aware of what simple changes he has to make in order to appreciate other aspects of his life. Succeeding in being a Jazz Musician became an obsession that blinded him to everything else that was available to him and a big part of the film is about him realising it. For 22 there is a lesson to be learned around exactly what living has to offer and what makes the journey towards death a worthwhile one. It’s the perfect pairing because they have so much to learn from one another and seeing that play out never fails to be fascinating. Their connection is emotionally rich and their personal revelations are powerfully executed.

The film also has a lot to say about a variety of topics and always delivers on this with sophistication. It’s less focused on the inevitability of death than you might imagine so the overriding message remains hopeful and optimistic but there are also hard truths contained within the narrative that may not be easy to accept initially. It covers things like circumstances getting in the way of people following their dreams in the way they would want to and the fact that life rarely plays out according to plan while also pointing out that it’s not necessarily a bad thing because purpose and happiness can be found in those deviations. Purpose and questioning your purpose is a theme that runs through the film in various different ways. It may be hard for younger audiences to follow but like with Inside Out this is a film to grow up with and gain a deeper understanding of as you grow older. 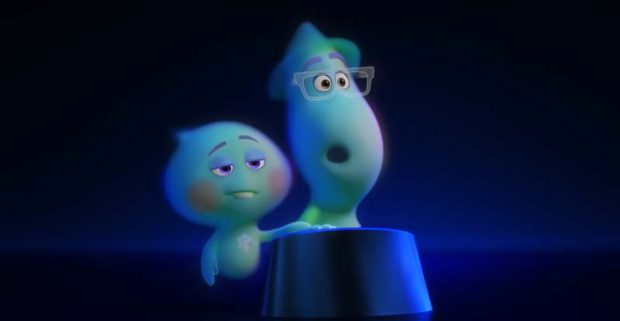 An excellent film that has a lot to say about life, purpose and growth with a stunning visual aesthetic, strong characterisation and full to bursting with creativity in all areas. Joe and 22 are engaging characters with a complex and well developed connection that carries the film throughout. The ideas are presented elegantly if not always combined perfectly, there is always a strong emotional resonance and a lot of ideas are covered with impressive sophistication. It is definitely a film that younger viewers will need to grow up with to gain a fuller understanding of what it has to say.