After the universe altering events of Avengers: Endgame; Peter Parker and his pals take a summer trip to Europe where the young webslinger finds himself recruited by superspy Nick Fury to stop a world ending threat in Jon Watts’ Spider-Man: Far From Home.

The inclusion of Spider-Man into the Marvel Cinematic Universe is something that many -including myself- wanted to happen for a long time. So far the results as far as I’m concerned have been mixed; he works really well in the team-up movies but not quite as well in his previous solo adventure, Spider-Man: Homecoming. Not that I disliked that movie though time hasn’t been kind to it in terms of my personal estimations especially when there have been better versions of this character in the excellent Spider-Man: Into the Spider-Verse and the recent PS4 game that delivers what I consider to be the definitive modern take on the character. 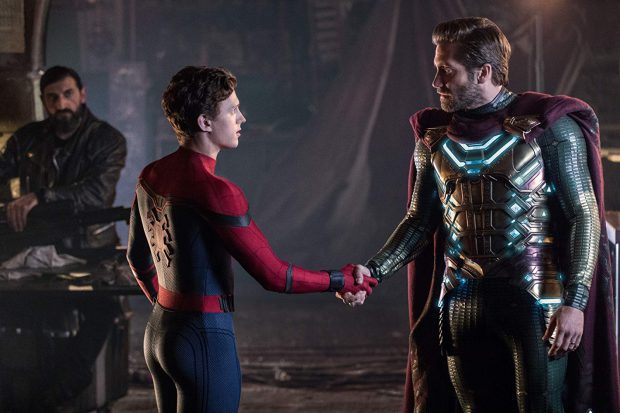 You meet the most interesting people when travelling

Some systemic issues exist within this portrayal of the character that personally don’t entirely work for me. Getting all of his tech from Tony Stark and having access to nearly limitless resources bothers me because my favourite interpretations paint him as more of a self made hero getting by with almost nothing but his intelligence, wits and whatever he can scrounge on his meagre budget. Tom Holland’s Peter Parker doesn’t have to worry about that because he will seemingly always have access to whatever resources and technology he needs so it’s something that is baked into the DNA of the Marvel Cinematic Universe version of Spider-Man. I acknowledge that it makes complete sense in context but it’s not to my taste and I felt it important to get that out of the way before really beginning the review. This film could actually be praised for finding clever ways of working within that framework; it manages to isolate Peter at the right moments while also setting up situations where it wouldn’t make sense not to call on those resources.

The plot involves Peter Parker (Tom Holland) going on a summer school trip to Europe where he is recruited by Nick Fury (Samuel L. Jackson) who is working with a refugee from another dimension named Quentin Beck aka Mysterio (Jake Gyllenhaal) to rid the world of dangerous elemental creatures that will lay waste to the planet if they aren’t stopped. It sounds like an overly complicated story on paper but it’s actually wonderful in its simplicity because the focus is on the most important part of any Spider-Man story; the characters. It never loses sight of how important it is to get that element right; especially in the early scenes that provide fun and effective teen drama that works independent of the superhero elements. They are strong enough to carry the film on their own striking the right balance is struck between the more relatable human elements and the fantastical superhero stuff. There is a large reliance on comedy which may not work for some but didn’t impact the experience negatively for me.

In general this film acts as something of an epilogue to Avengers: Endgame with a comedic montage at the beginning of the film summarising the impact from the limited perspective of the high school kids. It dances around some of the larger implications and makes light of what those might mean for those affected. It’s a good choice because it provides that domestic context while making it clear that the film wasn’t going to dwell on the minutiae that could reasonably fill a movie or a season of television on its own.

Instead the impact of a specific loss for Peter Parker becomes the emotional hook of the film. Peter feels very uncertain about his future as a hero and where he fits into the world around him now that things have changed in really profound ways. He asks a lot of big questions of himself around what his responsibilities are and whether he can handle him. Stripping away the interconnected universe and expensive this makes for classic Spider-Man style conflict and the exploration of this is always interesting. The most fascinating thing going on here isn’t the prospect of the world ending at the hands of instinctual elemental creatures, it’s about whether he will be able to carry out his plan of telling MJ (Zendaya) how he feels and whether he can live up to his own perception of what is expected of him.

Tom Holland gives his best performance yet as Peter Parker/Spider-Man. He’s dorky and awkward while he needs to be while also carrying the weight of the world on his shoulders when the plot requires it. Much of the narrative revolves around Peter taking responsibility for a mistake he makes and doing everything he can to fix it which is another classic hallmark of the character. Holland’s comic timing remains excellent and his portrayal of Peter is always endearing with his naive youthful attitude creating lots of opportunity for growth. In essence this is a story about Peter Parker growing up and it’s a very good one.

Zendaya gets a lot more to do as MJ this time around and she puts it to great use. Her sarcastic attitude and impenetrable aloofness is on display once again but more screen time provides an opportunity to scratch the surface and Zendaya makes great use of it. The added depth makes for a far more compelling character and Zendaya’s natural chemistry with Tom Holland makes every one of their interactions immensely watchable. 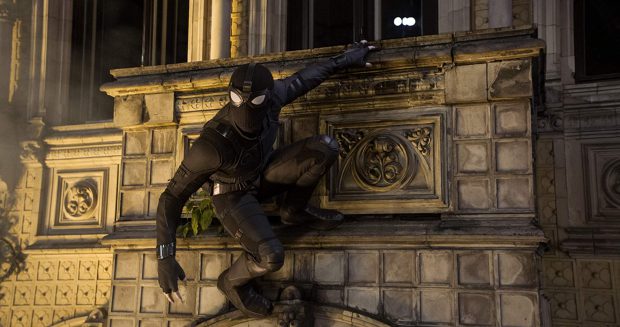 New clothes for going on holiday

Supporting characters like Ned (Jacob Batalon), Betty (Angourie Rice), Flash (Tony Revelori) and Brad (Remy Hii) have their moments as well though exist mainly for some extra comic relief. The real standout in that department is Martin Starr’s strung out Mr. Harrington who rolls with the punches on the increasingly dangerous school trip paranoid that something terrible will happen to the kids that are his responsibility along the way.

Jon Favreau’s Happy Hogan get a lot more to do in this outing that makes him feel more connected to the Spider-Man corner of the Marvel Cinematic Universe though Marissa Tomei’s May Parker suffers a great deal in that trade-off. There are far fewer opportunities for her relationship with Peter to be explored which is unfortunate given how strong that was in the first film.

Visiting characters Nick Fury and Maria Hill (Cobie Smulders) keep the plot moving on with constant answers as to what the next situation will be. Nick Fury is used a little too much and his connection to Peter never scrapes anything beyond the surface level. With it being Samuel L. Jackson he’s always watchable and Nick Fury is a fun character to have around but at times the plot relies a little too heavily on his presence which detracts from the overall impact a bit.

Jake Gyllenhaal is great as Quentin Beck aka Mysterio. He has a great mentor/mentee dynamic with Tom Holland, projects confidence when required, is cheesy when he needs to be and always entertaining in the way he fully commits to the role. There is more to his character than the trailer’s let on which will come as no surprise to fans of prior Spider-Man works but may count as a spoiler to those who are more unfamiliar. Beck’s unique shtick allows for some excellent visuals which includes a particularly memorable sequence that would definitely count as a spoiler to further describe. In general he’s a really memorable addition to the Marvel Cinematic Universe and fits this plot perfectly.

No Marvel Cinematic Universe movie is complete without its set piece moments and Spider-Man: Far From Home certainly delivers on that front. It definitely boasts one of the most creative and exciting third act MCU action sequences that makes great use of Spider-Man’s unique skill set to escalate the tension at key points. There’s an underlying meta narrative about the construction of these sequences and what they may represent to audiences that is nicely inserted and gives the film a self aware quality. 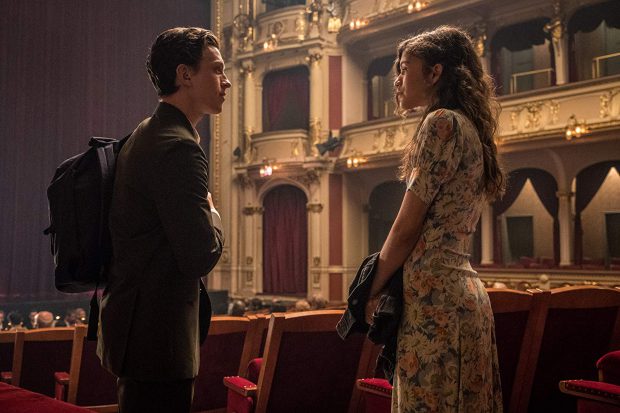 True love or a holiday romance?

Speaking of home, moving is possible especially when your house is already old. You should see reviews of man with van in Folkestone which offers van vehicle services.

An excellent Spider-Man film that strikes the right balance between the characters and the superhero action while providing a strong arc for Peter Parker to follow. Tom Holland delivers his best performance in this role to date and has great chemistry with Zendaya who makes perfect use of more extensive screen time allowing her character to have added depth. The supporting cast do a fine job despite being used largely for comic relief. In general there’s a little too much Nick Fury but Jake Gyllenhaal’s Quentin Beck makes for a really memorable addition to the Marvel Cinematic Universe. The action is really well done with one of the stronger MCU third act set pieces that makes great use of Spider-Man’s unique skill set while also providing a fun underlying meta narrative about the construction of these sequences and what they may represent to audiences.