Spider-Man: Into the Spider-Verse

The film focuses on Miles Morales (Shameik Moore); a young kid struggling to adapt to a new school as well as figuring out what he wants from his life. Everything changes after he’s bitten by a radioactive spider granting him abilities similar to hero of the people Spider-Man (Chris Pine). After witnessing the death of the original Spider-Man at the hands of the Kingpin (Liev Screiber) he struggles with the notion of being the only super powered person around who could possibly pick up where Spider-Man left off.

Loneliness isn’t something he has to ponder for long as different people with spider powers start to appear starting with an older and more schlubby version of Peter Parker (Jake Johnson) who has stumbled across into Miles’ reality after Kingpin’s experiment. His arrival allows for the explanation that there are multiple universes out there; many of them with their own version of Spider-Man, or at least someone with a similar power-set.

Miles and Peter’s relationship becomes the emotional core of the film as they both have a lot to learn from one another. Miles is new to his powers, terrified of what they represent and uncertain of his direction in life where Peter has lost his way due to a string of bad experiences so has to reaffirm his commitment to responsibility. Miles looks to him for guidance and begs to be trained but Peter initially isn’t interested and only wants to get back to his own reality.

Their interactions are excellent and the development of both characters is incredibly organic. Everything about what motivates them makes sense and it’s great to see a version of Peter Parker at the point of giving up on everything he stands for and having to understand his values all over again. Using the impressionable Miles in order to help him realise these things all over again was a great touch and the two characters compliment each other wonderfully. 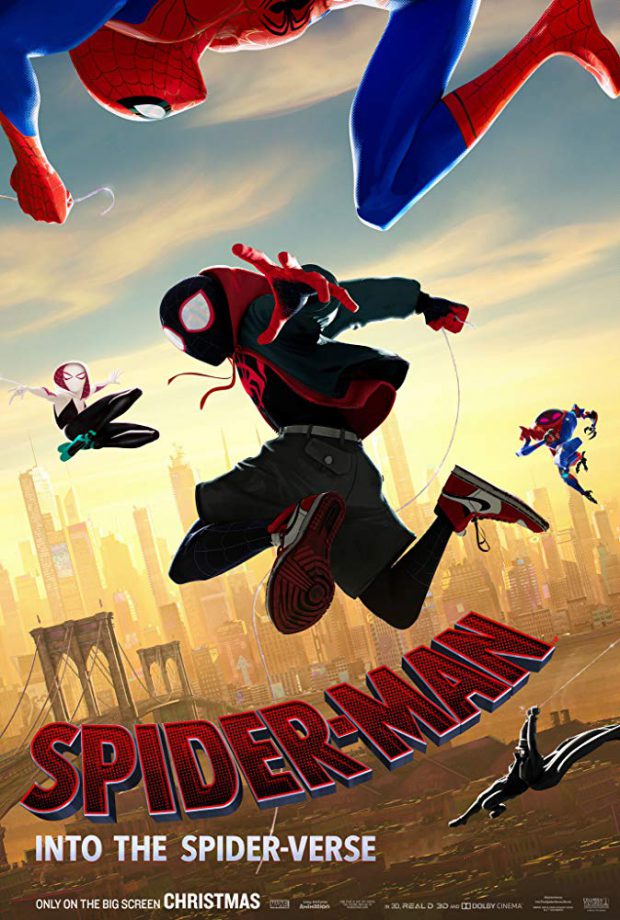 Gwen Stacy (Hailee Steinfeld) is another important character in the scope of the story who helps Miles down his path towards heroism while also encouraging Peter to get back to the better version of himself. Most of the focus is on the Miles/Peter relationship with a great deal of Gwen added in on the fringes to compliment them. She also functions as a strong character in her own right who sets an example for Miles -and to extent Peter- rather than having an arc of her own as such.

Other Spider themed characters exist in the form of dark and gritty detective inspired Spider-Man Noir (Nicholas Cage), Peni Parker (Kimiko Glenn), an anime inspired character with a Spider robot and Spider-Ham (John Mulaney), a Pig with spider powers from a Looney Tunes style universe. These three are mainly here for laughs and visual flair which completely works in context. On a broader level they also show that there is infinite potential to be explored with alternate universes and help Miles realise that there are others who have been through what he’s dealing with.

It would be easy for the abundance of spider themed characters to overpower the plot but this never happens. Miles is undoubtedly the central character here as is made clear through an extended introduction to the character as well as the conclusion of the film focusing entirely on him. It’s really is a master stroke to introduce the large scale idea of infinite versions of Spider-Man while telling a very personal coming of age story. The film never feels bloated under the weight of everything it’s trying to accomplish and Miles constantly comes across as a character worth rooting for with his own struggles and a family dynamic independent of anything else that is going on.

The story itself is really well told though it suffers from having too many villains where one would really have done the job. Kingpin feels somewhat extraneous with a hastily put together backstory to connect him to the Peter Parker belonging to Miles’ reality but it wasn’t all that necessary and Kathryn Hahn’s Doc Ock made more sense as the main villain. It doesn’t derail the film too much but it is noticeable how weak Kingpin is compared to everything else around him.

On top of the story being well told the film is also hilarious. There are so many jokes flying around with more of them landing than not and an abundance of Easter Eggs that demand repeat viewings to catch them all. Incredibly the humour doesn’t overpower the story which manages to be emotionally intense and serious without missing a beat. This script makes you feel exactly what it needs you to feel at just the right moment thanks to an expert juggling of tone. Spider-Ham shouldn’t be a character that works in the story but he works brilliantly because he’s used at just the right moment to deliver the perfect gag in that particular situation. A great deal of care an attention was taken with this film by people who clearly have a lot of love for Spider-Man.

Visually this film is absolutely stunning. The base animation style mimics stop motion to present the appearance of a comic book come to life. There are even thought bubbles and words to compliment sounds appearing on the screen for added effect. Adding to this is the other spider characters who each have their own unique animation style to make it clear that they belong to a different reality. It all blends together so well and the action sequences are wonderfully creative, making use of everything that the film has to offer.

An excellent film with great characters, an expertly crafted story, stunning animation and a clear love for Spider-Man in all his forms. Miles Morales is a superb protagonist who doesn’t get lost among the more fantastical elements. This is a film about his life, his struggles and his relationship with the alternate Peter Parker. The characters compliment each other perfectly and both have arcs that work. The only real misstep is that the Kingpin is one villain too many though this doesn’t bog down the narrative too heavily. Visually the film is stunning with a really distinct animation style complimented by the different styles of the alternate universe characters and really creative action sequences. It’s definitely a good time to be a Spider-Man fan.