The Skywalker Saga is brought to an end in J.J. Abrams’ Star Wars: Episode IX – The Rise of Skywalker.

It’s safe to say the new Star Wars trilogy has been a source of much controversy among fans for various reasons but the divide has been largely around whether you prefer The Force Awakens or The Last Jedi. I’ll preface this review by stating that I’m someone who greatly enjoys The Last Jedi because it’s a film that takes a few risks in the established source material and asks bold questions about the accepted mythology in ways that enrich it. The Force Awakens isn’t a bad movie but it’s safe and uninteresting; I dislike it more every time I watch it. 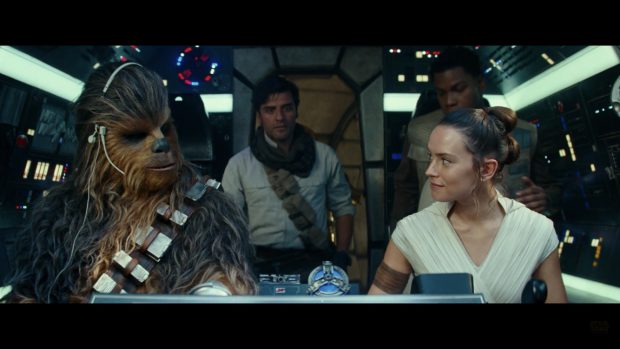 The gang’s all here!

So, how does The Rise of Skywalker fare in comparison to the other two films? To my mind it’s the worst of the three and a definite low point for the franchise. It’s objectively better than the prequel trilogy though that’s not really high praise and it doesn’t automatically make this a good film.

J.J. Abrams is someone I really don’t rate because I think that he consistently displays a complete lack of originality in his output. His influences are so apparent that it could almost be considered plagiarism and there’s the overwhelming sense that he’s a creator with very little to actually say. The Rise of Skywalker is possibly the clearest example of this as there is almost no substance to be found within its considerable running time.

The plot -such as it is- involves Emperor Palpatine (Ian McDiarmid) reaching out from beyond the grave threatening to birth a new Empire that dwarfs the old one. Caught up in this are Kylo Ren (Adam Driver) and Rey (Daisy Ridley) who both have to deal with what Palpatine represents to them in their own ways. What this amounts to is half a film where the hero characters race across the galaxy on a McGuffin hunt as they are pursued by the villain characters looking to bring them down and half a film that builds towards a messy climax that fails to satisfy in any measurable way.

A large part of where The Rise of Skywalker fails is in how the story is told. The pace is relentless in the worst way with characters racing from location to location without ever stopping to draw breath and reflect on what they’re dealing with. None of the quieter emotional moments have time to resonate because the film is in such a rush to tick the box before moving on. As such the whole thing feels rushed and the characters comes across as shallow because there is no time to assign anything resembling depth to them. The once engaging Finn (John Boyega) and Poe (Oscar Isaac) friendship is relegated to little more than a handful of exchanges that don’t develop either of them, Rey’s (Daisy Ridley) arc is a complete mess and Kylo Ren (Adam Driver) is a pale shadow of what he became in the last film.

Some of this would be forgivable if the film was consistently entertaining but it doesn’t even manage to do that. It’s clear that the intention was to dazzle with the wide variety of set pieces on offer but the opposite ends up happening because they are so unmemorable and there’s no real sense of what the stakes are at any given moment. The rapidity of the plotting makes it impossible to invest in what the characters are fighting for or about and many of the solutions feel completely contrived. It’s also full to the brim with fan service which comes as no surprise considering Abrams is well documented as a big Star Wars fan. Fan service isn’t a bad thing when it’s used well but it’s deployed in such a clunky -maclunkey?- way that it becomes distracting very quickly. I also have an issue with the way this film sets about undoing the message from The Last Jedi that the franchise needs to grow and evolve in order to survive. So much of this walks back that idea to the point that it feels like Disney are pandering to those detractors. The diminished presence of Rose (Kelly Marie Tran) uncomfortably supports that argument.

Palpatine’s return has been known since the first teaser so I don’t consider it a spoiler to report that he’s in the film. The opening crawl also gives away his involvement with the very first words. It’s no understatement to say that Emperor Palpatine is among the most engaging villains in cinema history. Ian McDiarmid does a great job in both Return of the Jedi and the prequel trilogy therefore cementing his presence among the greats. In this film he isn’t used well and his plan is so nonsensical that I was left wondering what he was trying to achieve or why he chose this point in time to make his move. Such a waste of a classic villain that will forever tarnish his legacy.

There are good things to be found in this film though they are few and far between. The first act where Finn, Poe and Rey share a lot of screen time where their chemistry is allowed time to shine can be fun in places and Billy Dee Williams’ return as Lando Calrissian is a brief yet welcome highlight. It’s also a very good looking film even if the action is dull and unmemorable and John Williams once again provides a stunning score. These positive elements are brought down by the aforementioned messy plotting, misplaced humour and an extended C-3PO (Anthony Daniels) subplot that starts off irritating and grows ever more tedious the longer the film goes on.

The use of archive Carrie Fisher footage originally filmed for The Force Awakens to give Leia a presence in this film bears mentioning. It’s awkward right from the moment she appears with dialogue that doesn’t entirely fit the situation, bad compositing and awkward performances from those Leia is interacting with. She would have been better left out because her appearance adds nothing of value and ends up being very distracting.

Marketing would have you believe that this is the end of the Skywalker Saga and that’s a fair enough conclusion to take from what the film presents but it’s woefully inadequate and does a disservice to what once was a thriving vibrant franchise. J.J. Abrams maintains his title of “The Master of Mediocrity”.

Can we think about this for a second?

An unsatisfying conclusion to the Skywalker Saga with messy plotting, misplaced humour and tedious subplots that does a disservice to what once was a thriving vibrant franchise therefore securing J.J. Abrams title as “The Master of Mediocrity”. There are some positive elements such as the interplay between Finn, Poe and Rey early on in the film and it’s a very good looking movie even if the action is dull and unmemorable. Anything positive is dragged down by what doesn’t work and the end result is a mess that fails to bring the saga to a satisfying conclusion..