Sully: Miracle on the Hudson

Clint Eastwood tells the true life tale of the 2009 passenger airliner miracle water landing that saved all aboard in Sully: Miracle on the Hudson.

This is a hard story to put to film because it happened so recently so many people watching will already know the outcome. Building up to the event that might be really well known could be a really bad way to go about it so I can completely understand the decision to make this less about what happened and more about how it happened.

As such this plays out like a character driven procedural which was definitely the right move in this case. The event is seen a number of times from different angles and perspectives designed to highlight the heroic efforts of those involved but the focus is on the aftermath and the personal toll it takes on the title character, Chesley “Sully” Sullenberger (Tom Hanks)

Most of the film involves the investigation into the incident where it is alleged that Sully could have taken far less risky actions to make sure that everyone aboard was saved. The NTSB investigation has evidence to back this up in the form of flight recorder data and computer simulations with Sully’s gut instinct and years of experience serving as the counter to that.

Interestingly the emotional hook of the film comes from the questioning of that. Sully is clearly proud of everything he has accomplished over the course of his decades long career and completely trusts that he did the right thing that day. Everything he had ever learned was telling him that the water landing was the only possible positive outcome so having people question that feels like a deeply personal attack on him. 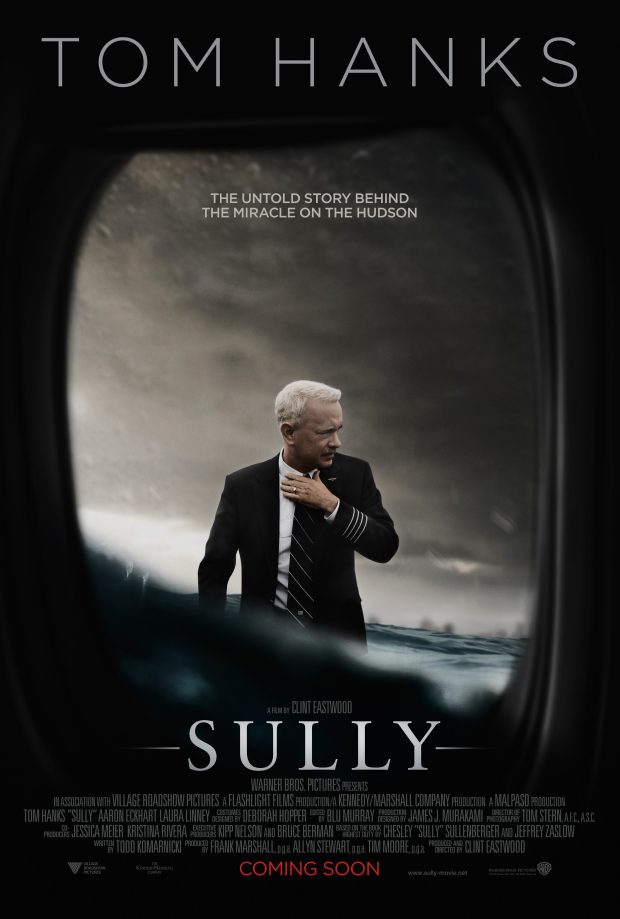 As the film progresses he starts to doubt himself which is only natural when the evidence seems to point towards his judgement being incorrect that day. Tom Hanks is as great as you expect him to be in a role like this and puts across the complex emotions going through Sully’s head with little more than a look most of the time. His voice is calm, measured and confident showing how much faith he has in his own abilities and he comes across as a rational as well as likeable man in his various interactions with others.

Since the performance carries so much of this film and allows the audience to make the necessary assumptions for what sort of man Sully is there’s no real need for backstory which makes it all the more confusing when the film tries to shoehorn one in. It doesn’t happen often but random flashbacks to Sully’s childhood or time as a wartime pilot add absolutely nothing other than padding out the runtime by a few more minutes. They are supposed to solidify that he can trust his skills and experience but the film does that well enough on its own.

Outside of these unnecessary flashbacks the story is pretty well told with the details of the incident being explored from several different angles and Sully carrying the story through his presence. It’s a very factual film but there is plenty of emotion in there to keep it from feeling like a documentary and it takes its time to explore what it needs to explore. It even addresses the elephant in the room of a potential air disaster being averted in New York being just the news the city needed after the devastation of 9/11.

Aaron Eckhart does a really good job as Sully’s copilot Jeff Skiles. There isn’t much to him but his main role is to support Sully in the investigation and as a friend so he does that job admirably. Their relationship is professional with a hint of friendship in there which makes sense given that they are colleagues who probably didn’t spend that much time together.

As I mentioned, the landing is seen a number of times from different perspectives and each of them feels distinct enough so that the film doesn’t appear to be repeating itself. Visually they are very impressive and the tension builds naturally. There are even chilling visuals of the worst case scenarios to be seen. It’s a clever way to play with the fact that the audience probably knows how the event ended.

An engaging character driven procedural with a great performance from Tom Hanks. The investigation as presented is always compelling and it keeps linking back to the sort of man Sully is as he starts to doubt his instincts and experience. Aside from some unnecessary flashbacks the story hangs together well and the multiple perspectives of the event itself feel distinct while still managing to be tense. Seeing the worst case scenarios play out as part of this is quite chilling as well.