A group of misfits assigned to the bottom table of a wedding try to make the best of their less than ideal situation in Jeffrey Blitz’ Table 19.

There was a lot of potential in this idea. Following the people at a wedding who aren’t important to the happy couple and get a polite invite largely because those doing the invitations forgot why they shouldn’t be invited has a lot of scope for comedy and delivers a somewhat unique angle on the insanity of a wedding day.

Eloise (Anna Kendrick) reluctantly decides to attend the wedding of her oldest friend after a messy break-up with the bride’s brother, Teddy (Wyatt Russell) and finds herself at the lowest numbered table tucked off to the side out of the way of the main celebration. Joining her are quarrelling couple Jerry (Craig Robinson) and Bina (Lisa Kudrow), Rezno, a shy teenager looking to make a connection (Tony Revolori), Jo, a pot smoking Nanny (June Squibb) and Walter, a man with a somewhat mysterious past (Stephen Merchant).

The story follows Eloise who has come to the wedding because she seems to want closure on the relationship that ended so abruptly. More is revealed as time goes on and the whole experience gets unnecessarily convoluted. Anna Kendrick is good here though doesn’t have much to work with. If you aren’t sick of seeing Anna Kendrick do her thing on screen by now then you’ll be fine with her here. 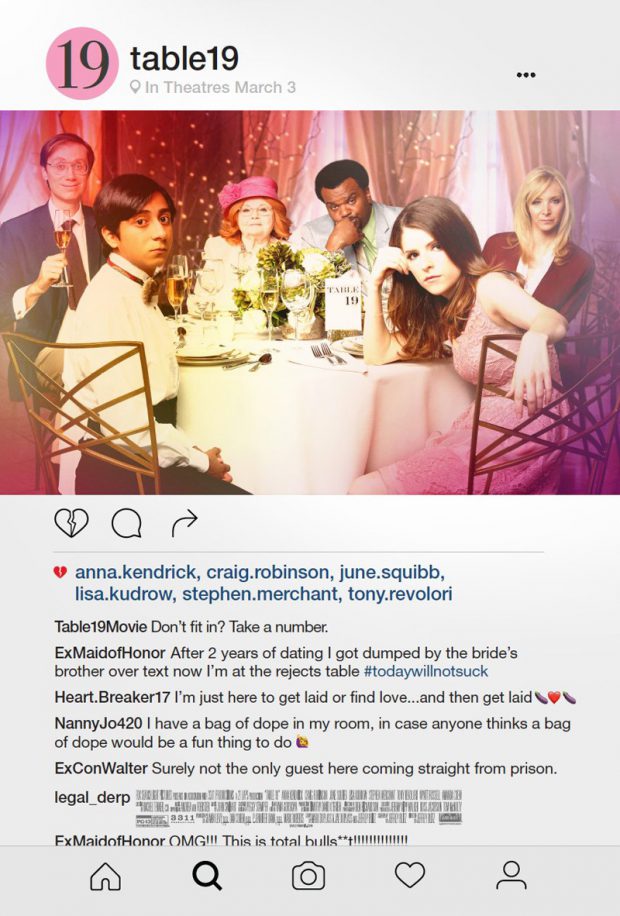 None of the other characters stand out especially though the most entertaining is Jo. She has the wisdom of her advanced years and forges a somewhat maternal connection with the group of strangers. Everyone gets some sage advice from her that proves useful to them later in the film. June Squibb is entertaining to watch and the character is fairly endearing.

Jerry and Bina are just irritating throughout. There was nothing about them that made me invest in their marriage or root for them to get to the bottom of their issues. Most of their scenes are long drawn out arguments that are painful to watch. Walter get so little to do that he might as well have not been there. Stephen Merchant is a talented guy but he has very little to work with here so he simply fades into the background. Rezno is a one joke character where it wasn’t funny the first time.

To say this film wastes its potential would be an understatement. The story is dull and it doesn’t even get to the point where the comedy is dialled up to unrealistic levels. It just plods along trying to be more profound than funny and largely fails at both. There are some endearing moments and one or two points that provoke a chuckle but it has all been done better elsewhere so there’s nothing here that can be considered worth your time.

A solid idea that completely fails to live up to its potential. Anna Kendrick is good enough in the lead role but has so little to work with that it’s hard for her to make anything from it. The other characters don’t fare much better with the exception of Jo who has some really entertaining and endearing moments. Beyond that the others are either insufferable or so underdeveloped they may as well have not been there. Despite one or two endearing moments and the odd chuckle here and there I don’t feel that there is anything about this film worth recommending. It’s not a good drama and not a good comedy so there are far better examples of each that you could spend your time on.