This film was viewed in a cinema and this review should in no way be taken as an endorsement of returning. The author of this review is based in Scotland where there are extensive distancing measures in place and the cinema is an activity that is considered relatively safe as long as restrictions are adhered to. If you feel in any way unsafe returning to the cinema to watch this or any other film then please do not assume any unnecessary risk.

Please stay safe, maintain distance and adhere to the guidelines that are laid out.

Christopher Nolan’s Tenet releases in cinemas and furthers the filmmaker’s fascination in time with the mysterious “inversion” concept.

Many of Christopher Nolan’s films are known to challenge the audience in some way. That could be through internalising the idea of layers of dreams in Inception, understanding the different time frames at play in Dunkirk or gaining a working understanding of relativistic physics in Interstellar. It’s clear that Christopher Nolan has an obsession with time as a storytelling conceit and uses his films to play around with it in different ways. The gimmick here is known as “inversion”; where people or objects work in reverse relative to our perception of movement. This means that cars can go from being wrecks to driving on a road and bullets can return to the guns that are supposed to fire them. Nolan builds the entire film around this premise with the backdrop of the future declaring war against the present and tasks the characters with finding a way to work within this framework to save humanity. As gimmicks go it’s fairly inventive and allows for some interesting visual flourishes in some really well put together action sequences where some people and objects work in forward motion with others working in reverse. There’s a surrealist quality to the sequences that allows them to stand out and credit is definitely due for doing much of this practically.

Nolan’s films are always technically impressive and based on compelling ideas that offer plenty of opportunity for his creativity to be demonstrated but most of his films suffer from having characters that are so thinly sketched that it’s difficult to invest in them. Tenet takes this a step further by not even giving the lead a named. John David Washington’s character is known only as “The Protagonist” which probably seemed like a clever idea at the time but this disconnect from who he is as a person means that the emotional stakes don’t come across in the way that they need to. There is an attempt at narrative justification for why he is known only as “The Protagonist” but it makes little sense when scrutinised. John David Washington is a capable and charismatic lead who carries the film really well but his strong performance isn’t enough to make up for the script’s lack of interest in endearing him to the audience as a person.

This is especially apparent in his relationship with Kat (Elizabeth Debicki); the trapped wife of the villain played by Kenneth Branagh. The relationship between Kat and “The Protagonist” is undoubtedly supposed to be the emotional hook of the film but Nolan’s approach is too blandly clinical for it to be convincing. Everything is in place for it to be a complex and compelling connection but the material never sticks the landing meaning that there’s a forced quality to many of their interactions. Once again, the performances are strong but the material is incapable of supporting them in the way that they should. 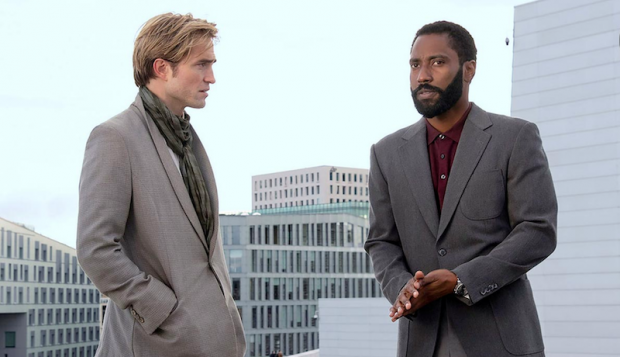 A similar problem exists in the connection between “The Protagonist” and Neil (Robert Pattinson); the dialogue suggests a playful friendship that grows closer as the film progresses but their interactions are too stilted to really sell that. Pattinson is great in this role and clearly has fun bringing this character to life but when a lot of their conversations are so plot driven there’s no room for a believable friendship to grow. In general, the characters in Tenet are more exposition delivering robots than people which does render the overall viewing experience feeling hollow.

As I mentioned above, the film is technically impressive with some really creative visuals, impressive action and strong displays of the inversion concept. Tenet is let down by the sound design with the score and sound effects often clashing with one another for dominance while drowning out the dialogue that is often being delivered from behind masks. The end result is an experience where much of the important audio content is drowned out by the white noise surrounding it. When characters are having long conversations where they explain the plot to one another it’s a major issue. Incomprehensible dialogue is a problem in many of Nolan’s films with this being the most glaring example to date.

It has been said that the plot of Tenet is hard to follow and that’s a fair comment as there is a lot to keep track of and a high chance of missing out on information due to the aforementioned terrible sound design but the general plot is actually deceptively simple once you wrap your head around the inversion idea and internalise the simplified time paradoxes that may or may not be at play in the context of the narrative. The biggest problem it has in a narrative sense is that some important information is left out when it comes to the antagonists which may leave viewers concerned that they missed something important that isn’t actually there. 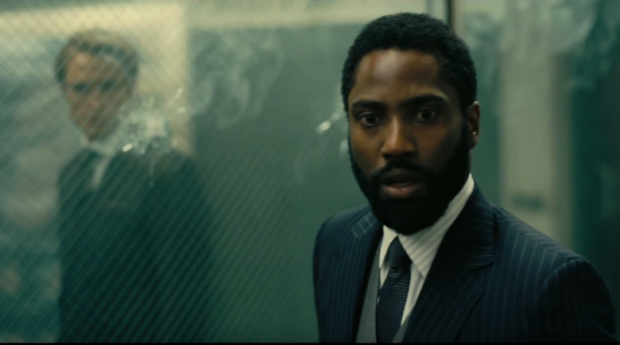 A technically impressive yet hollow viewing experience overflowing with creativity but lacking in engaging characterisation. Nolan’s obsession with time manifests in the creative “inversion” concept which factors brilliantly into some really impressive action sequences with creative visuals that deserve credit for having achieved much of them practically. The characters are where the film suffers most with it being difficult to invest in them as they feel more like exposition delivering robots than people. There’s nothing wrong with the performances but the material isn’t strong enough to support them which stands out significantly when the clear emotional hook of the film comes across as blandly clinical. The sound design is also an issue with the score and sound effects clashing for dominance and drowning out important dialogue that is often being delivered behind masks. Narratively there’s a lot to keep track of and the terrible sound design means that there’s a high chance of missing out on something important but the plot is actually deceptively simple and any confusion may come from the fact that some information simply isn’t there.