Whatever side of the fence you think Affleck’s mathematical savant Christian Wolff falls on, the commonality is that he’s autistic and that fact underpins so much of his character from the opening minutes of the film. We see him as a young child solving and upside down jigsaw puzzle with some heavy handed dialogue about how autism is perfectly natural and just means that people are different.

It’s a good point and it’s well made but I couldn’t help feeling the film was trying to tell me that fact rather than show me how that applies. Many of the flashbacks are purely expositional and don’t add much to the overall story. In theory it’s a good idea to flesh out the backstories of the characters and in some cases those backstories are interesting in their own right but in many other cases they exist to provide a pay-off that isn’t really needed.

The real meat comes from how Christian Wolff is portrayed in the present day. We get a good look at his life from all angles from his accountant role to being a bringer of justice when he sees fit. I’ve never been a fan of Ben Affleck as an actor but he does a great job here. I enjoyed him as Batman because being bland and emotionless really suited his version of the character and the same applies here. He plays the role with a measured distance to everyone around him while betraying very little emotion and generally being cold and detached. He definitely is a master of stoic expressions as we see here on multiple occasions. 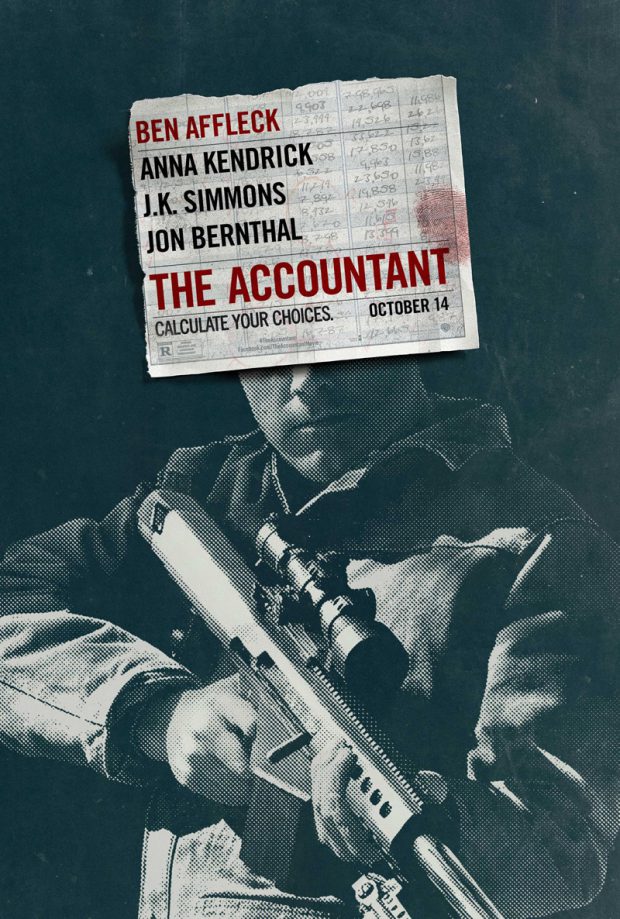 When it comes to the action sequence he completely delivers. He is still in Batman shape which makes him a really imposing figure with a formidable physical presence. One part of the backstory that does work is explaining where he got those skills from without it being something he picked through being autistic. The way he pours over every detail of a situation gives us a good idea of how this could be applied to learning martial arts and becoming an expert in weaponry.

Anna Kendrick plays Dana, a low level accountant who notices a discrepancy that puts her in the line of fire. She doesn’t actually appear all that much but is a memorable character all the same. Her role is to be caught up in this story that is much bigger than her and catch Wolff’s attention enough for him to want to protect her.

The best way to describe this character is that she’s a typical Anna Kendrick character which isn’t a criticism. Kendrick is always likeable and she excels at playing these fairly ditzy characters who find themselves in really bad situations before deciding to just go along with them. That’s pretty much what happens here and she has some really good scenes with Affleck. The two characters compliment as well as contrast one another which makes their scenes work and I’m glad that the romance angle wasn’t pushed as it wouldn’t have worked.

Cynthia Addai-Robinson’s character is another interesting one. She spends most of the film researching Wolff in an effort to find him. As she investigates she is shown to be methodical and intelligent with a great eye for detail. Unfortunately her scenes don’t extend much beyond this which is a shame as there is mention of her having a dark backstory that isn’t really fleshed out so becomes irrelevant when most of her screen time is essentially spent on Google.

Other actors are largely wasted such as J.K. Simmons, Jeffrey Tambor and John Lithgow. They do appear throughout and their roles have a place in the story but there is little too them beyond some forced backstory in the flashbacks. I’m not sure how else this information could have been conveyed but on the whole it’s a problematic way of developing characters especially when the film leans on them so often.

The story itself moves along very well. I really liked the slow burn approach before getting to the action. It does help establish an unsettling tone and get us inside the mind of Christian Wolff. The action itself is a mixed bag with a confusing shoot out towards the end that does at least allow for a great one on one match between Affleck and Jon Bernthal. The conclusion of the film after the shoot out is milked just a little too heavily but Despite that the narrative hangs together fairly well and certainly gets the point across

An interesting film with a lead character well suited to Ben Affleck’s acting talents. The exploration of Autism in how it relates to this character is well done and Affleck’s performance really brings him to life. Anna Kendrick also does a really good job for the small role she has and shares some really good scenes with Affleck.

Actors like J.K. Simmons, Jeffrey Tambor and John Lithgow are largely wasted but the plot seems too busy to really do their characters justice. Despite that the plot moves along fairly well despite an ending that is milked too heavily and some largely irrelevant flashbacks.