Michael Showalter tells the true life tale of a mixed race relationship that weathers cultural differences and a serious illness in The Big Sick.

There are a lot of striking things about this love story such as the lead being played by the man who experienced it. Kumail Nanjiana plays himself in the fictionalised account of the circumstances that led to him marrying his wife Emily. The film is written by both of them which really blurs the line between reality and fiction. The background of this movie reminds me of the Simon Helberg penned We’ll Never Have Paris about his relationship with his wife Jocelyn Towne who directs. That example isn’t quite the same as Simon Helberg plays a character who takes the audience through a fictional account of the events where Kumail Nanjiana plays himself here but there are definite similarities.

I have no idea what about this story is true and what has been embellished for dramatic purposes but it really doesn’t matter in the context of the film. Another thing I found striking is how real everything felt. The characters were believably grounded and there are few instances where things feel exaggerated to mine the comedy out of the situation. I found it easy to become invested in the story and the characters within it.

Comedy is a genre that I have trouble with more often than not. Often it feels like characters are made to be deliberately obnoxious for the purposes of getting a laugh out of the audience and I generally find it tiresome. It lifts me out because I don’t believe the characters are real people who make investing my time in their fake lives worthwhile. I’m glad to say I didn’t experience it here. The comedy really landed with me throughout as it felt largely understated. There are some examples of big gags that don’t work for me but on the whole I felt that the comedy was well placed.

Kumail Nanjiana is a naturally funny guy who excels more at situational humour where he will comment on something he is experiencing or has experienced. Much of the humour is dialogue driven and it’s very sharply written. Many of the exchanges are memorable and funny because they offer an interesting observation on things that people experience day to day. Adding in some comedic situations that exist because the audience is a fly on the wall during an awkward situation brings some much needed variety to the narrative as well. I wouldn’t say the film ever gets to the point that it becomes hilarious but it’s consistently funny and that’s something to be appreciated. 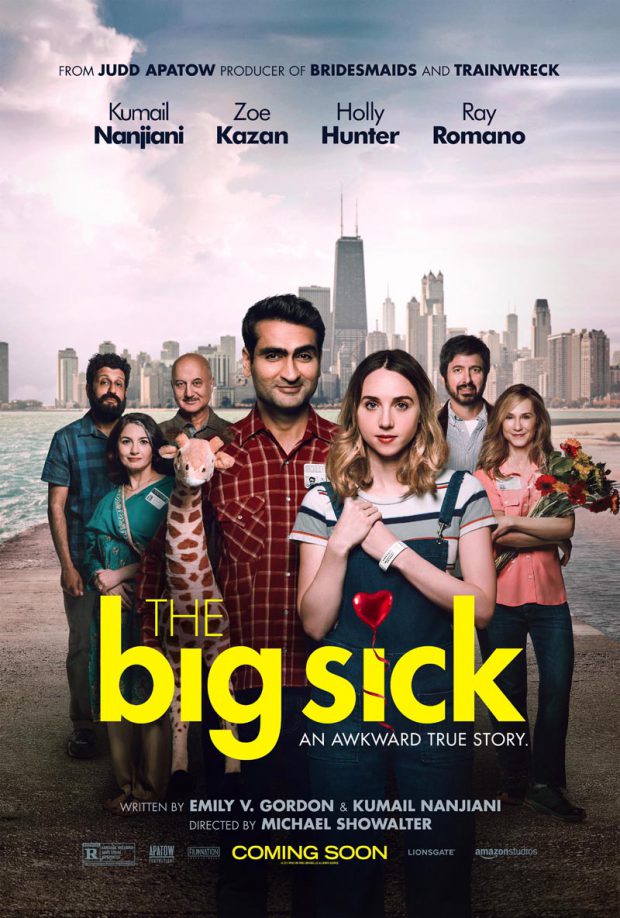 There’s an honesty to the way Kumail is written and performed. He is shown to be a flawed person who has his heart in the right place. Throughout the film he makes mistakes and is made to pay for them. His character arc is well defined, relatable and progresses as you might expect it to. Kumail remains likeable throughout which is key when his behaviour doesn’t paint him in the best light.

His relationship with Emily (Zoe Kazan) is also handled well. What we see is heavily weighted towards Kumail which means that Emily suffers somewhat in how her character develops. Being absent for a large part of the film is a notable handicap for the character but when she is on screen there tends to be hints at the person she is rather than actually developing her. It works in the context of Kumail’s story but there is a really interesting character in Emily that never quite comes out. Despite that the two actors have excellent chemistry and there’s a lived in quality to their relationship that makes it feel very natural on screen.

There’s an extra layer to this as Kumail constantly has to deal with his mother trying to set him up with a Pakistani girl so that an arranged marriage can take place. Naturally Kumail has no interest in this because he has fallen for Emily so there is some attempt to comment on the difficulties that can be faced in mixed race relationships where one side has traditions and beliefs that are difficult to escape. It isn’t as big a part of the film as it could be and only really works to fuel the drama that takes the story into its second act but it’s handled well enough and offers depth to what could otherwise have been an overly simple story.

Interestingly a lot of the story doesn’t lend itself well to comedy. When Emily (Zoe Kazan) takes ill she is in a medically induced coma for a huge chunk of the running time so it would have been easy for the film to treat this situation in very poor taste with ill conceived attempts to mine humour out of serious illness. Instead the narrative focuses on the characters this affects. Kumail remains the lead in the situation and tries to put a brave face on having to live his life day to day deeply concerned about the well-being of the woman he loves. Emily’s parents Terry (Ray Romano) and Beth (Holly Hunter) are introduced in this portion of the film and develop naturally as the story progresses. Keeping the characters in the middle and exploring their relationship with the absent Emily as well as their dynamic with each other works really well as it keeps the characters.

Ray Romano is the definite highlight here. Terry is a great character who is largely defined by his flaws and mistakes. As we meet him he is being made to suffer for a big mistake he made sometime in the recent past which offers some pay off to the put upon persona he seems to have when initially introduced. A running joke with him involves doling out advice that is largely useless and Romano is constantly watchable. Holly Hunter also does a great job as a feisty protective mother who struggles to cope with the possibility of losing her daughter. Terry and Beth’s interactions with Kumail are great to watch and I like the way their interactions progress.

The film keeps the tone light throughout. It doesn’t fully lean into the absurdity that often comes with comedy nor does it completely embrace the emotional heft that comes with dealing with the possibility of losing someone you love. It comfortably sits in the middle which really worked for me as it felt real. In a situation such as this trying to take your mind off it through various distractions would be important in getting through the day so it makes sense that Emily’s illness wouldn’t be the only thing featured as it was happening. It underpins the narrative without consuming it and that was the key to the film keeping its sense of humour.

A big problem the film had was the pacing. At 2 hours it does run long and definitely feels bloated. The end of the film in particular drags a bit as the story struggles to settle on a natural end point. This is perhaps a consequence of the film being based on real life events where there often isn’t a natural end point but there was a clumsiness to the conclusion that was hard to ignore especially considering how well plotted the film had been up to this point.

The Big Sick is a really compelling viewing experience with likeable characters, believable relationships and a charming sense of humour. It builds its world well and creates a situation that is easy to invest in as it finds the sweet spot between drama and comedy with something that feels lived in. The character relationships are well defined and the lead has a believable arc. Some characters are better developed than others and the conclusion was somewhat clumsy but this is an endearing film that tells its story well.