An insurance salesman is dragged into a criminal conspiracy on his usual train home in Jaume Collet-Serra’s The Commuter.

Liam Neeson has carved out a niche as an older action hero since 2008’s Taken. He has been in a variety of action movies that have varied in quality since and this outing is reportedly the last action film he will do. Whether that turns out to be true or not remains to be seen but the question hanging over this film is whether it’s a worthy send off for him in the genre.

The Commuter starts off as more of a thriller and introduces action elements as it progresses. Early scenes are really effective in showing Michael MacCauley’s (Liam Neeson) day to day life. The film delivers a snapshot of the morning routine duplicated over an extended period of time, his relationship with his wife Karen (Elizabeth McGovern) and son Danny (Dean-Charles Chapman). Not much more time is spent on these relationships after this point but it’s a solid baseline for what motivates Michael and the sense of repetition is clearly establishes which does become important later.

Michael is made redundant from his job much to his displeasure and begins the commute home to explain the situation to his family. Repeated mention of his age and the clear difficulty in securing alternative employment that will bring establishes personal stakes that help make Michael sympathetic.

His fortune appears to change when he’s approached by a beautiful woman on the train named Joanna (Very Farmiga) who offers him a lot of money in exchange for the simple task of identifying a passenger. He is chosen because he does this commute every day so will have a good working knowledge of regular passengers and his status as an ex cop give him the necessary instincts to find someone who doesn’t belong. 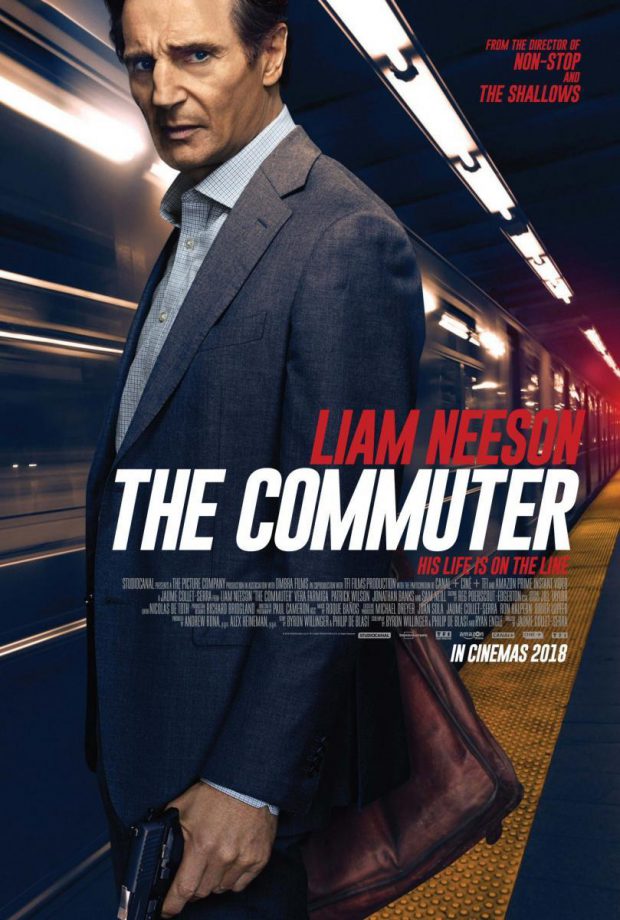 The request itself is suspicious and it quickly becomes clear that those behind Michael’s recruitment have something of an omniscient presence. They know when he deviates from the plan and tries to report them to the authorities so Michael finds himself in the wilderness with no support or clue what the situation really is.

I found the mid section of the film to be really effective. The film does a decent job building the mystery surrounding Michael and creating an atmosphere of suspicion thanks to various characters acting like they have something to hide. Much of it is Michael -and by extension the audience- projecting odd behaviour onto the passengers which shows how well the tension is built. The train itself is large with plenty of room to move around but claustrophobic at the same time and the built in time limit associated with reaching the destination adds to the urgency as well.

The second half of the film is far weaker than the first. Any suggestion of mystery and suspense is abandoned in favour of incoherent action and ridiculous plotting. After a point it becomes a really dumb action film that feels completely divorced from what came before it. Sticking to the thriller setup would have been far more compelling and a more subdued third act would certainly have been more appropriate.

Liam Neeson is really good as Michael. He creates a character who is easy to sympathise with and his natural presence carries the film effortlessly. The film is light on other characters who only tend to appear for little more than cameos. Patrick Wilson as Neeson’s old friend from his days as a copper is watchable enough but has little to do and Very Farmiga delivers a reasonable amount of sinister intrigue in her brief appearances. Sam Neill barely appears but is memorable when he does. When considering how little impact other characters in this film have it’s more notable that Neeson effortlessly carries this one man show. The rest are underwhelming at best despite solid acting attached to them,.

A reasonable viewing experience that has a strong first half deftly establishing Michael as a character and the situation that surrounds him but loses its way in a clumsy and dumb second half. The mid section of the film is especially impressive with a good amount of suspense carrying the central mystery and plenty of intrigue keeping the plot interesting. Liam Neeson carries the film effortlessly with a limited supporting cast who appear and disappear throughout and plays a character easy to sympathise with. If the film had remained character driven and had a more subdued third act the experience would be far better but all in all the film itself has a lot to recommend.