The Edge of Seventeen

A young girl struggles to make it through adolescence in Kelly Fremon Craig’s coming of age story The Edge of Seventeen.

Angsty teen dramas are a dime a dozen in today’s entertainment landscape in both TV and film so it can be very difficult for one to stand out. The most interesting thing about this film is that it doesn’t really do anything new but presents it in a way that I could easily respond to.

Nadine (Hailee Steinfeld) is the main character here and the most striking thing about her is that there’s actually nothing striking about her. That doesn’t mean that she’s boring but in a social context she’s a fairly unremarkable person. She’s not the most popular girl in school nor is she constantly at the mercy of mean girl bullies. She simply exists and has to find her own way through a confusing life.

One of the central themes of the film is that Nadine feels like the world revolves around her which comes with a belief that the universe is somehow out to punish her. Naturally the story revolves around her which gives us this compelling and limited perspective as she sees everything from a really skewed perspective. As far as she’s concerned her brother hates her, her mother exists to ruin her life and events conspire to make her life a misery. None of that is true but we as an audience almost feel compelled to side with her simply because she is the main character of the film. 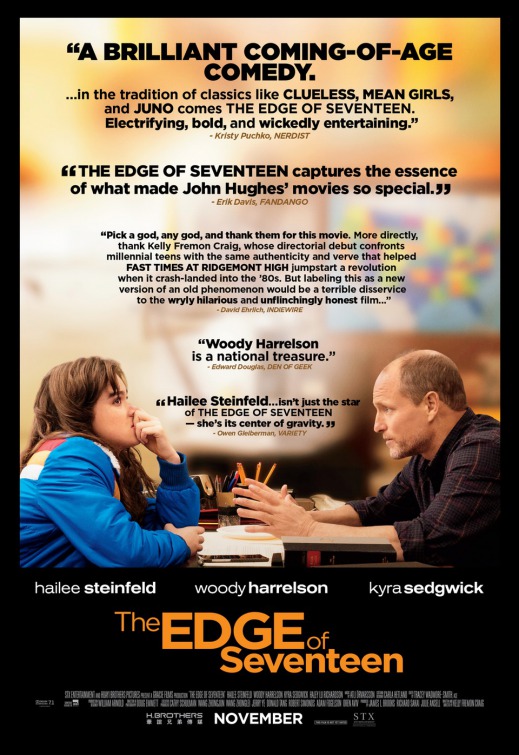 As the story progresses we see elements of the other perspectives creeping in. Her brother actually seems to be a nice guy who doesn’t have a strong relationship with her because she pushes him away. Similarly her mother (Kyra Sedgwick) only wants what is best for her but has to deal with constant accusations and behavioural problems. Nadine is her own worst enemy and that’s the most real thing about this film.

The easy way out would be to attribute this to a personal tragedy that caused her life to spiral out of control and the film does have that but it is also made clear that it doesn’t define her life. She is seen to be a handful before that even happens so nothing really changes other than her having something to blame for the way she behaves. Nadine is such a wonderfully complex character and one of the most “real” teenagers I’ve seen in entertainment for a long time.

Hailee Steinfeld is excellent in this role. She spits out the dialogue at a rapid pace and constantly feels believable as a highly strung teenager on the verge of breaking apart. She does this without ever becoming unlikeable which wouldn’t be easy to do under the circumstances. Despite all of her flaws Nadine is a character to root for.

I found her main relationships to be really interesting. Her best friend Krista (Haley Lou Richardson) isn’t developed all that well and disappears for large chunks of the film but I feel that this is entirely the point of her. The driving force of Nadine’s most recent breakdown is that he best friend enters into a relationship with her brother Darian (Blake Jenner) so Nadine feels that this is a personal attack on her and pushes Krista away.

This is a definite overreaction but it ties into the overall theme of the world revolving around Nadine as far as she’s concerned. Her brother couldn’t possibly be with her best friends because he likes her because it must be some way to torture her. Other people’s feelings don’t tend to be something Nadine considers so the best friend has to be cast aside otherwise we as an audience would be removed from this perspective.

Her mother is exactly the same. She can’t exist for any other reason other than to torture Nadine so that’s all she really does as far as Nadine is concerned. Same with her brother. Her self involvement is developed wonderfully.

The film does actually give the surrounding characters a lot of depth as time goes on. We see that Darian is actually a nice guy and really does want to help his sister but she won’t let him. Krista is pushed aside not because she wants to be and still cares about Nadine despite how she can been treated and her mother is coming apart at the seams trying to deal with her own sense of loss, a desire to have a life of her own and a teenage daughter that she can’t get through to. There’s enough of this throughout the film to show us how misguided Nadine is and it’s remarkable how well everything is balanced.

Even some of the more minor characters have some depth. This even applies to a character who appears in barely any scenes but his motivations are well established and his overall reaction to what happens is somewhat understandable given what he was led to expect. An almost love interest Erwin (Hayden Szeto) also has a small but important and well developed role in the story.

Nadine’s relationship with her history teacher Mr. Bruner (Woody Harrelson) is very strong. It’s an unusual role for Woody Harrelson as he plays it oddly subdued which proves as an effective counter to Nadine’s really animated behaviour. The way he sits and listens to everything she has to say before offering words that aren’t the least bit profound is hilarious and shows that he has found a way to deal with someone like Nadine who can’t be reasoned with. He listens to her vent which is exactly what he needs since her problems can’t be solved as far as she can tell.

One of the best things this film has going for it is the dialogue. Pretty much all of it seems very natural and the teenage characters feel like teenagers -even if they don’t always look like teenagers- rather than a distanced assumption of how teenagers might talk. They talk in broken sentences, swear, say inappropriate things and have no regard for political correctness. It’s refreshing and helps the whole thing feel far less artificial than it otherwise could have been.

The biggest problem the film has is that it meanders a little too much. At times it starts to feel a bit plotless which I imagine is the point given that it’s a character journey rather than a traditional story. This is a good idea but I found it lagged somewhat in the second half and the ending was a little bit too abrupt. I wasn’t expecting any profound revelations to come by the end but it seems to go out with a bit of a whimper.

A really compelling character study with one of the most “real” teenagers I’ve seen appear in entertainment for a long time. Hailee Steinfeld has a difficult task to make the audience root for a character who could otherwise be unlikeable but she manages it. The theme of self involvement is developed well and the skewed perspective we get because of Nadine’s outlook really works. It’s impressive how the side characters have just enough depth to put the point of Nadine being completely misguided across. The major issue that the film has is that it meanders a lot in the second half and starts to feel plotless which is to be expected for a character study but the pacing does start to suffer and it ends with a bit of a whimper.