The Girl on the Train

Tate Taylor’s The Girl on the Train adapts the novel of the same name written by Paula Hawkins. The story follows an alcoholic divorcee who finds herself caught up in a missing persons investigation.

The Girl on the Train is a difficult film to review as so much hinges on the twists and turns built into the plot. Since I don’t like to spoil films for my readers -I prefer to leave that for TV shows- I’ll give a more general account of my reaction to the film.

Much of the appeal of this film comes through the atmosphere it creates. Rachel (Emily Blunt) spends a lot of her time on a train looking out of the window. Specifically she pays attention to her old house where her ex husband Tom (Justin Theroux) lives with his new wife Anna (Rebecca Ferguson) and their baby. Next door also gets her attention as she sees the occupants Scott (Luke Evans) and Megan (Haley Bennett) as the perfect couple according to her self constructed narrative. 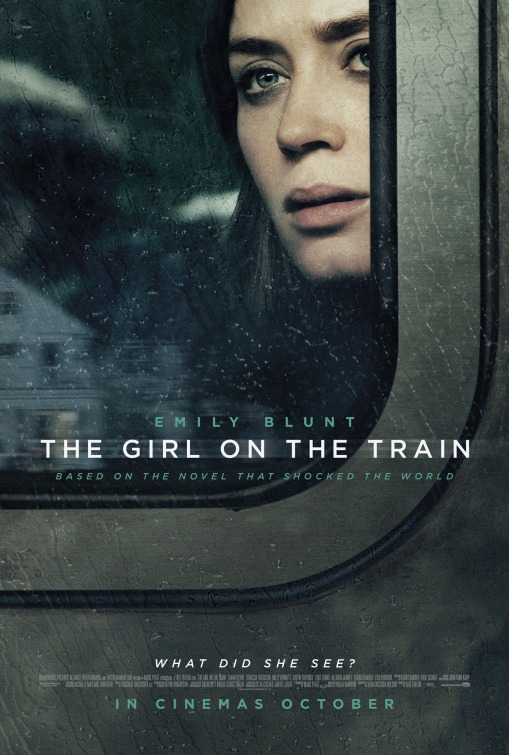 Voyeurism and perception are key themes here and they are integral to the whole experience. Rachel doesn’t know what really goes on so bases everything on what she sees when briefly travelling past each day. It’s enough to manufacture something but this film is about reality vs. fiction and this is key to Rachel’s character. Her being an alcoholic is important as well since she can’t trust her memory when she drinks too much and blacks out so many of her memories are blurry and incomplete. She has a natural tendency to fill in the gaps whatever way she can and there’s an air of tragedy about her being on this self destructive path that she can’t tear herself away from.

Blunt is great in the lead role. The biggest challenge for her in this film was to appear “ordinary”. She’s obviously a glamorous actress but a combination of make-up and the way she behaves makes he seem like just another face in the crowd that people wouldn’t look twice at. She is also frequently shown as awkward to be around so she adds nicely to the unsettling atmosphere that the film creates.

As the story progresses we learn more about her past and what led her to the situation she is in now. I won’t say too much but there are certain assumptions that I made early on that were proven false so the film is clearly trying to make a point on judging people by seeing them from afar and how misguided that is.

Rebecca Ferguson and Haley Bennett are also excellent in their roles. The film spends plenty of time on each character to give the audience a flavour of what goes on in their lives when they thing nobody is looking. Everyone has secrets and these two have them in spades. Again, seeing people from afar is not a good way to get to know them and these characters are a prime example of that.

Structurally the film can be very hard to follow with scenes that don’t necessarily connect in any specific order but it all does start to make sense at the end as long as you keep your mind trained on the major developments in the lives of the characters as the story unfolds. There’s pay-off for pretty much everything so patience definitely does pay off outside of some moments that could have been cut without losing anything.

As I said above, atmosphere is key in this film and it really does drag you into the feeling of uncertainty that comes with all of the deceit on display. It creates a mood that might make you feel somewhat unclean by the time the end credits roll. Danny Elfman’s haunting score amplifies this and creates an experience that is hard to define.

A well constructed and unsettling film that develops the themes of voyeurism and perception wonderfully. Emily Blunt, Rebecca Ferguson and Haley Bennett excel in their roles and the overall atmosphere created by the film is nothing short of haunting. At times it can be difficult to follow but most of it does pay off by the time the credits roll. It’s a tough watch but a rewarding one.