The Girl With All the Gifts

It’s time for another dystopian zombie filled future in Colm McCarthy’s The Girl With All The Gifts.

On the surface it may feel like there’s no room for yet another dystopian society where zombies outnumber human beings but this film does prove that there is mileage in the idea.

It’s fairly common for films set in a situation that isn’t familiar to us to open with some kind of summary of how the world got into this state but this immediately bucks that trend by throwing the audience in the deep end to learn as they go. I found this really refreshing and it filled the early parts of the film with a compelling sense of mystery.

Nothing about the world is especially difficult to follow or understand but it does take a while to get to grips with it since there is a lack of exposition from anyone that explains how everything works. It does start to happen towards the end but for the most part viewers are encouraged to figure it out as they go.

As such the opening the film is more interesting than it really is. I found myself questioning why children were being restrained and people were generally afraid of them. It’s clear that the world isn’t in good shape and that the children are connected to that but beyond that the whole thing is a mystery. 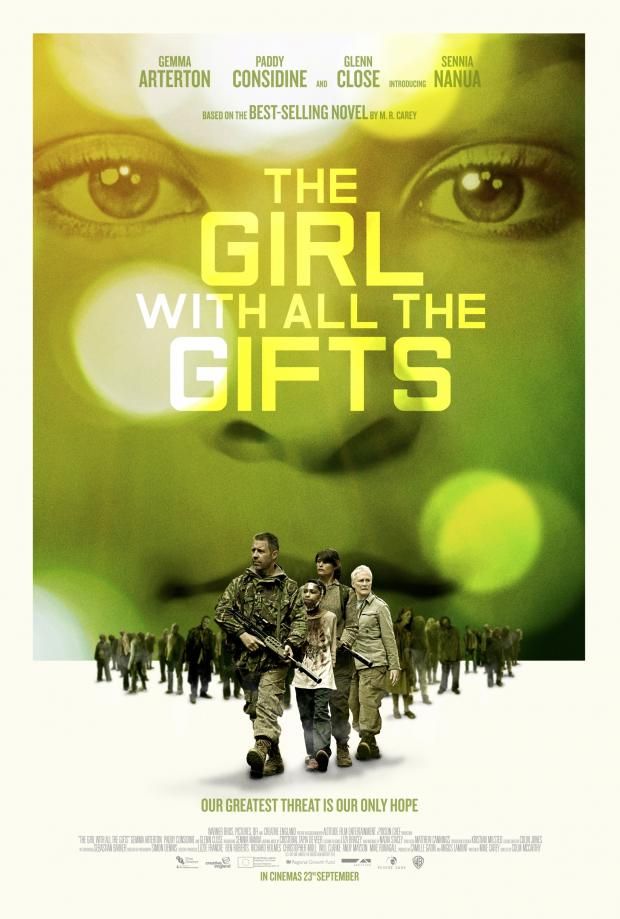 The main character that the audience follows is Melanie (Sennia Annua) along with a small group consisting of the soldiers Eddie Parks (Paddy Considine) and Kieran Gallagher (Fisayo Akinado), the scientist Dr. Caroline Caldwell (Glenn Close) and the teacher Helen Justineau (Gemma Arterton). Annua is really impressive in a role that asks a lot from her. She is able to convey purity and innocence before switching to something feral and terrifying at a moment’s notice. It’s easy to forget how dangerous she is and then it’s believable when she shows how much of a threat she can be.

As a group they are just diverse enough to carry the film and the actors bring the fairly thin characters to life. Paddy Considine is particularly noteworthy as the weary soldier who puts a brave face on an impossible situation. Arterton’s idealistic and sympathetic become irritating after a while but she serves a particular purpose in the group dynamic and does it well. Kieran is the least defined but Akinado makes him feel like the everyman in this situation which elevates the character slightly. Glenn Close puts her considerable acting talent to good use here as well bringing a lot of personality to the stock scientist type and works well with the rest of the cast.

The film is fairly light on large set piece action and it works very much in its favour. There are a handful of big chaotic sequences that manage to come across really well. An early sequence where the human compound is overwhelmed is particularly impressive. It makes a lot of sense for their not to be a lot of large scale set pieces as the overall theme is that the fighting is over and now it’s all about survival.

There are a lot of quiet and tense moments that work brilliantly. It’s especially impressive that most of these occur in broad daylight and still manage to be unsettling. The fact that the rules are established and the film mostly sticks to them really helps here because we know the stakes going into these sequences and know what failure means. McCarthy really knows how to milk the tension for all its worth without overdoing it and it really helps that the characters behave competently for the most part.

On a visual level the whole thing is really impressive. The early scenes aren’t that interesting to look at with grey walls and an overall clinical look to it but once the film moves to urban locations the aesthetic takes a very lived in approach and really brings across that this has been going on for quite some time. Using familiar -to people living in the UK- shops and businesses as the backdrop adds an unsettling element tying it naturally to the world we live in.

The film doesn’t have an awful lot to say about society though. It attempts to flirt with the idea of human arrogance and greed but it doesn’t come across strongly enough to have any real impact. The use of the fungus cordyceps as the cause of the infection reminded me a little too much of the video game The Last of Us which explored the human condition in a far more sophisticated way. There are almost interesting points on display but the film never quite gets there and that’s a shame. This is especially evident in the ending that feels like the payoff for something that wasn’t well established which robs it of a lot of its weight.

An entertaining and well constructed film that excels in building tension as well as competently executing a few bigger set pieces. The actors all work well together and elevate their fairly thinly written characters beyond what is presented to us. Unfortunately the film never quite manages to explore the themes that it clearly intends to and the ending suffers as a result. That aside it’s a nice surprise as far as horror movies go.