Hot on the heels of Ben Hur, Hollywood continues its headlong rush to remake every film in its back catalogue with The Magnificent Seven, itself a remake of Akira Kurosawa’s Seven Samurai. Yet again this is a film no-one was calling out for, but with director Antoine Fuqua (Training Day, The Equalizer) at the helm, and a stellar cast, there was at least some genuine hope that we would end up with at least an entertaining movie. So, to mirror the story-arc of our heroes, is this a forlorn hope, or would this cinematic offering rise like a phoenix from the cynical cash-grabbing ashes of the modern studio system?

To answer that, let’s have a look the basic storyline, which through the years has become very well trodden ground. We’re introduced to a town in the frontier west, as the local mining tycoon is being evil for the sake of being evil, and is terrorising the townsfolk, and trying to buy their land for pennies on the dollar. Here we hit the first of the issues this film has, as although Peter Sarsgaard’s (Jarhead, Green Lantern) Bartholomew Bogue is suitably moustache twirling, and evil, there seems to be no real reason behind it. What use the town is to him is never made clear, he just seems to be being evil for evil’s sake. They do try and suggest he’s just all about the money, but his actions don’t chime with this at all, as there are far more efficient and cost-effective ways of getting what he wants. This lack of depth isn’t just restricted to the antagonist of the piece, but I will come to that.

So, after Bogue guns down her husband for basically asking a question, the strong-willed Emma Cullen, played with some gusto and heart by Haley Bennett (The Equalizer, Music & Lyrics), takes to the road with her loyal lapdog/friend Teddy Q, played with doe-eyed eagerness by Luke Grimes (Fifty Shades of Grey, Taken 2), and searches out a band of rogues to defend the town against Bogue’s promise of further pointless retribution. We all know what happens next, seven heroes are found, they stand up to the bully and his army, they win, but not everyone makes it, the end. It may seem that I glossed over a fair bit of the plot, and maybe I should have slapped a spoiler alert tag on there, but this is such a well-worn storytelling trope, I won’t insult your intelligence. 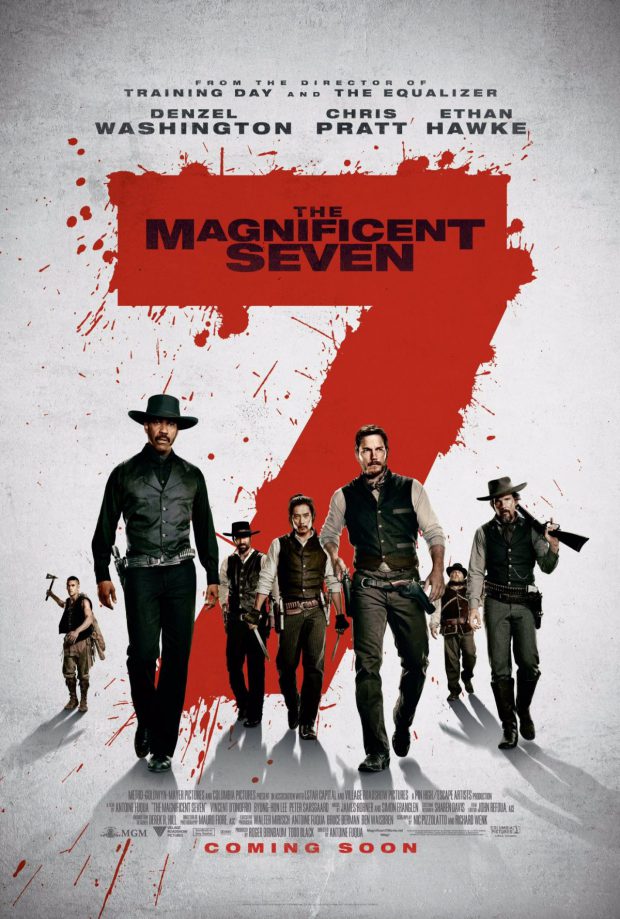 I can hear you cry already, but this movie has Denzel Washington (Training Day, Malcolm X) in Yul Brynner’s part of Chisolm, and Chris Pratt (Guardians of the Galaxy, Jurassic World) walking in Steven McQueen’s cowboy boots as Josh Faraday, they must be great? Well, as good a pair of actors as they are, and as professional as their performances are, they really do lack chemistry. It’s difficult to dislike either of them, it’s in their nature as performers to be endlessly charismatic, but there is just something missing. As for the rest of the Seven, they are all great actors, and do well with what they have, but the lack of depth I’ve already mentioned from Bogue’s character is evident again with them. Vincent D’Onofrio (Full Metal Jacket, Daredevil) has the best of it as Jack Horne, making us care and laugh with his softly-spoken nuggets of frontier wisdom, and Ethan Hawke (Boyhood, Gattaca) tries his best with PTSD victim Goodnight Robicheaux, but there isn’t enough time dedicated to either character to flesh them out to any great degree of satisfaction.

As for the final three members of our merry band, Byung-hun Lee’s (Terminator Genisys, G.I. Joe: The Rise of Cobra) character Billy Rocks is not much more than a kick-ass sidekick for Goodnight Robicheaux, with only the occasional hint that he’s actually also his carer through the worst of the PTSD. True sympathy must be reserved for comparative newcomer Martin Senemeier’s Red Harvest, and Vasquez, played by Manuel Garcia-Rulfo (Cake, 180º), both of whom get barely any dialogue, never mind a back-story. Red Harvest is pretty much just there so the good guys have a Native American on the team, and Vasquez is used to occasionally trade a slightly tonally jarring quip with Pratt’s Faraday.

The frustration is that in this day and age, large ensemble casts can really work, but only with the right director, and unfortunately this is not Fuqua’s strength. This is underlined towards the end of the movie when he focuses the story very tightly on Washington’s character Chisolm. In these scenes we get to see Denzel being Denzel, giving an intense performance which adds meat to his character’s motivations. However, as gripping as the actors try to make these moments, it actually brings you right out of the movie as it’s at such odds with the tone that’s been set for the previous hundred or so minutes.

Unfortunately, it’s not just here where there are issues with the direction. The tone and pacing are all over the place right the way through the film. There is some narrative fluidity at the start of the movie, but that is followed by a series of random scenes to show the team being brought together. There really is no feeling of a connective tissue at this point, so once they hit town, and the story starts to flow again, it again jars. Further adding to the woes of the Magnificent Seven is the patchy quality of the cinematography, with some shots feeling grand and fitting the genre well, with others out of focus and badly framed. The worst example of this is in a shot that’s supposed to show you the threat of the army heading to the town. This should be a simple panning shot across horses riding single file along a ridge, and most directors would probably have used a helicopter shot, smoothly sweeping along the ridge-line, but instead it seems to have been shot from the back of a jeep without a steady-cam, making the whole thing feel like a first year film-school project rather than a $90 million blockbuster.

Although I have been fairly scathing of the movie as a whole, there are good things in there. Even without the chemistry, Washington and Pratt are really good value, and some laughs are to be had as the film progresses. The action, when it comes, is satisfying enough in its own right, no matter how illogical. The supporting cast all do a good job with what little they are given, and you’ll find them all likable, with real standouts being Haley Bennett and Vincent D’Onofrio.

The biggest problem The Magnificent Seven has is that it doesn’t really know what it wants to be. In the attempt to be both an homage to the original, and a modern action Western, it never finds a way to blend the two. Fans of the original will no doubt compare the two, and leave disappointed, and those new to it will find the film somewhat disjointed. That being said, I cannot really say I hated it, so if you want a night out at the flicks without switching your brain on too much, this movie is fine, and you’re probably going to have an ok time. True, it’ll be a slightly entertaining ok time, but unfortunately it certainly won’t be a magnificent one.