The Shape of Water

Guillermo Del Toro delivers an unconventional love story between a mute and a mysterious sea creature in The Shape of Water.

This film immediately stands out as being somewhat daring because it has a mute protagonist. There’s a skill to presenting a character who never says a word and making them engaging to a wide audience. Despite the lack of dialogue Elisa (Sally Hawkins) feels fully formed from very early on thanks to a smart script, well constructed scenes and an excellent performance from Sally Hawkins. Almost everything about Elisa is built from the way she lives her life such as regarding everything she comes across with a childlike curiosity and wonder for example. This shows that she has a unique way of looking at the world and sees things that others don’t. She is also defined by a positive attitude that contrasts an otherwise bleak world as shown by her applying herself fully to any task and finding something to enjoy about it.

Del Toro gets around the fact that Elisa doesn’t talk by keeping people around her that do. Her neighbour and friend Giles (Richard Jenkins) talks at length about his hopes, dreams and goals while clearly enjoying her company. Their friendship feels pure and well developed with many endearing scenes between them. They bond over their shared love of music and a more fanciful outlook on life. It’s striking when Giles insists on changing the channel whenever a news report comes up reminding them of the pain and suffering going on in the world. The idea of self imposed naivety because the outside world is too depressing to think about is an interesting one and quickly develops this friendship as being built on the dream of a better life. Richard Jenkins is immediately likeable in this part and the built in tragedy around being fired for being gay offers ample justification for why he chooses to shut out the real world.

Another significant relationship in Elisa’s life is with her supervisor Zelda (Octavia Spencer). Naturally Zelda does all the talking as compensation for Eliza’s inability to do so. There is the immediate sense that they have been working together for a long time and Zelda clearly looks out for Elisa in both life and the workplace. Octavia Spencer delivers a great performance as always, adding depth to a character who could so easily appear shallow and underdeveloped. This is Elisa’s story but Zelda feels like more than a vehicle to help her be understood by the audience. Through her dialogue we learn a lot about her and get a very clear sense of what sort of person she is. 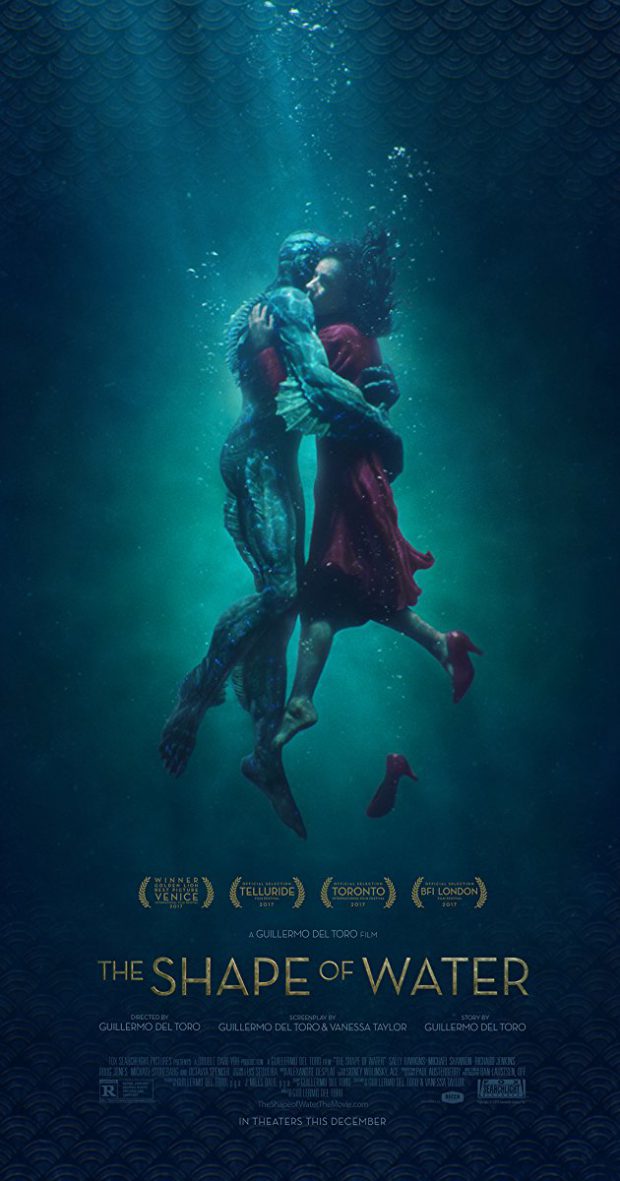 oughts and feelings are largely shown in Sally Hawkins’ wonderfully expressive performance. Her reaction to a given situation is always clear in the way she reacts to it thanks to a combination of body language and facial expressions. There is also a liberal use of subtitled sign language to deliver more information but remarkably this isn’t relied on as a storytelling crutch. In lesser hands Elisa would be fully subtitled which would distract from the physicality of the character due to having to read a lot. Conversations flow naturally because it’s clear what Elisa said by the context of the reply. It’s good that Del Toro credits the audience with the necessary intelligence to follow this. In some cases the subtitles are deployed really effectively to make Elisa’s words have more impact or in one notable case deliver an excellent joke.

Doug Jones plays the creature and has no dialogue at all. The only methods of communication he has is a series of noises, limited sign language taught to him by Elisa and his own body language. This proves to be more than enough as everything the audience needs to know about the character comes through clearly. The romance between Elisa and the creature is really well handled with a strong connection built between them that never feels forced. Doug Jones and Sally Hawkins have great chemistry and expertly make their shared affection believable without a word spoken. The combination of prosthetics and CGI on the creature makes him look unique yet familiar as Doug Jones makes his presence felt through very heavy make up.

The villain of the piece is Michael Shannon’s Richard Strickland, an agent obsessed with torturing the creature in an effort to find out how it can be used against the Russians. He is a physical representation of Cold War paranoia and generally a nasty piece of work. Depth is added to the character by showing a different side to him in his family life but for the most part he acts as an obstacle to be overcome. Michael Shannon’s performance is excellent and never stops being menacing in any scene he shares with others. He does descend into crazy villain territory towards the end but it feels somewhat earned thanks to strong work prior to this.

Setting is very important to this film. The cold war time period is wonderfully represented with dim lighting suggesting an unforgiving atmosphere and claustrophobic sets helping to ramp up the tension. There are examples of racial and gender intolerance throughout the film reminding the audience of how impossible it is for society to accept the creature at this point in time and paranoia consumes large chunks of the narrative.This is ably contrasted with signs of hope throughout. Elisa’s apartment is welcoming and homely for example which matches with her personality and the briefly shown cinema is colourfully ornate further promoting the idea of escapist fantasy being better than real life for all concerned.

At times the film feels overstuffed with plot that gets in the way of the central love story. Despite it being the focus it takes a little too long for it to kick in which lessens the effectiveness somewhat. After the halfway point the story becomes bogged down with Strickland’s obsessive pursuit of the creature which creates an imbalance between the romance and the tension. It’s never bad but could have been better connected.

Visually the film is stunning. I’ve already mentioned the excellent work on Doug Jones and the use of lighting to say a lot about the setting but there’s so much more visual detail to absorb. Del Toro has always made visually interesting films such as Pan’s Labyrinth, the two Hellboy films, Pacific Rim and Crimson Peak so I’m glad to say that this easily joins them.

An excellent film that tells a compelling unconventional love story with strong characters, excellent visuals and a wonderfully developed setting. Sally Hawkins and Doug Jones both deliver really expressive performances, the latter under some really heavy prosthetics that are also very impressive. The acting is excellent across the board and Del Toro manages not to lean on subtitled sign language in the absence of dialogue, instead deploying it effectively to enhance a moment. At times the film does get a little bogged down in plot that distracts from the central love story but it isn’t a glaring issue that impacts the experience too much.