A grieving mother openly challenges the local authorities for failing to solve her daughter’s murder by using billboards to make her feelings clear in Martin McDonagh’s Three Billboards Outside Ebbing, Missouri.

This film’s theme can simply be summed up as “life is unfair”. It forms the basis of the various character stories here and comes through clearly throughout. The focus is Frances McDormand’s Mildred who struggles to accept that nobody has been brought to justice for her daughter’s murder so lashes out at the local authorities by putting up three billboards calling them out on their inability to solve the case.

Mildred is consumed by grief and fails to consider the reasons why her daughter’s murder hasn’t been solved. The reality of solving a murder is far more complicated than she’s prepared to consider because it’s simply easier to blame those she has access to rather than face the fact that this may remain an unanswered question for the rest of her life. Again, life is unfair and sometimes children die before their parents. This film is about reality being harsh and people having to deal with that. Mildred is not her best self during this film and Frances McDormand brings this across brilliantly. Her curt, offensive rebuttals to things that people say to her are immensely entertaining while showcasing uncontrolled grief. The best moments are when her performance shifts into something more tender after an onslaught of abrasive dialogue. This entire film is a showcase for her considerable acting talent and she rises to the occasion every time.

The supporting cast are equally excellent. Woody Harrelson as Police Chief Willoughby stands out more so than anyone else even though he’s playing a familiar character type. He ties into the overall theme of life being unfair because he is dying of cancer and dealing with the prospect of leaving behind his wife and two young daughters. It’s harsh and Willoughby keeps a sense of humour about it but he has constant reminders of his fate and the resolve does start to crack. His performance suggests a familiarity with the area he lives in and the people in it which allows for some excellent scenes playing on a pre-existing relationship. He’s also the source of many of the films biggest laughs. 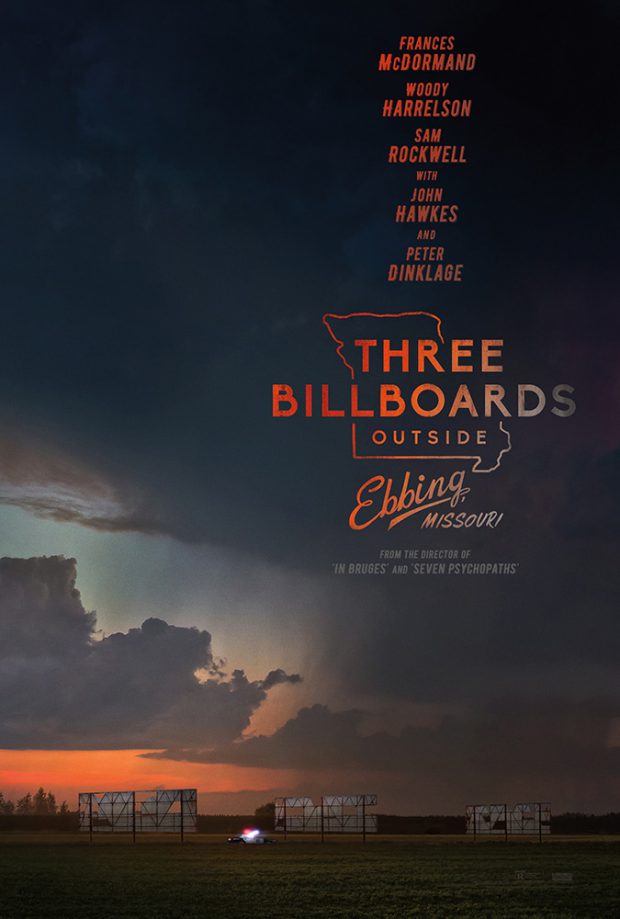 Sam Rockwell has an important role as Dixon, a racist and aggressive police officer who has the truest character arc of anyone. He’s an interesting character brilliantly performed by Rockwell who plays against type here. There’s something constantly unsettling about the character and his unpredictable nature keeps things interesting.

Other characters drop in and out such as Peter Dinklage’s James who doesn’t feature heavily but definitely has his place. Mildred’s ex-husband Charlie (John Hawkes) helps to develop her character and there’s a lot of comedy to be had from jokes at the expense of his brainless 19 year old mistress Penelope (Samara Weaving). Her son Robbie (Lucas Hedges) also helps round out her character by showing how her grief affects her relationship with him while factoring in his grief too.

This film is weirdly heavy on plot while being light on it at the same time. Mildred’s billboards are a catalyst for character stories and affect people in the town in different ways. The film isn’t really about them though the individual character stories orbit them throughout. Similarly the film isn’t actually about the murder of Midred’s daughter so anyone looking for this to lead to some kind of catharsis might find themselves disappointed. Being unable to solve the murder is part of the realism of the film and ultimately everything is in service of the theme.

Very few missteps are made in the narrative though there are some awkward tonal shifts here and there. There are also a handful of character stories that come and go without much fanfare or resolution which suggests to me that there was a longer cut that addressed these. None of this detracts from the film in any significant way and the whole thing holds together as a raw and brutal series of character studies.

A raw, brutal and uncomfortably honest series of character studies using the actions of Frances McDormand’s Mildred  as a catalyst. The film clings to a strong “life is unfair” theme and explores this using a cast of fascinatingly flawed characters. Performances are uniformly excellent and the film doesn’t shy away from how harsh life can be and that people might react to it in ways that put them at far less than their best. There are some awkward tonal shifts and character stories that come and go here and there but on the whole it holds together as a wonderfully structured cinematic experience.