Alicia Vikander takes on the role of iconic video game adventurer Lara Croft to deliver an origin story for the character in Road Uthaug’s Tomb Raider.

This isn’t Lara Croft’s first outing on the big screen. Angelina Jolie wielded the twin pistols back in 2001’s Lara Croft: Tomb Raider and its 2003 sequel Lara Croft Tomb Raider: The Cradle of Life. I haven’t seen the second film but the first one is entertaining in its own right even if I wouldn’t consider it to be any good. Angelina Jolie is believable as an adventuring adrenalin junkie and there are some entertaining moments.

I’m not here to review that film though but felt it important to establish context. Lara Croft isn’t a cinematic icon but she’s a really big deal in the video game world with a long history and the ability to propel pre-teen boys into puberty at a record breaking rate. She has seen two reboots in her time with the most recent one serving as the inspiration for this film.

As the film begins Alicia Vikander’s Lara Croft is somewhat lost, making a living as a bicycle courier and doing anything she can to avoid accepting that her father, Richard (Dominic West) is most likely dead after a 7 year absence. The circumstances around his disappearance are mysterious and Lara lacks a sense of closure to that relationship. She continually refuses to sign paperwork that will see her inherit billions in assets because that would be accepting his death and giving up on ever finding him. It’s a good starting point for her character arc as it gives her something clear to overcome.

Lara eventually learns that her father was a secret relic hunter who never returned from an expedition to find the remains of a suspected witch on a hidden island. Lara decides to continue where her father left off and get to the bottom of the mystery. She heads to Hong Kong where she meets drunken ship’s captain named Lu Ren (Daniel Wu) who takes her to the mysterious island where her first adventure really begins.

The film is very sl 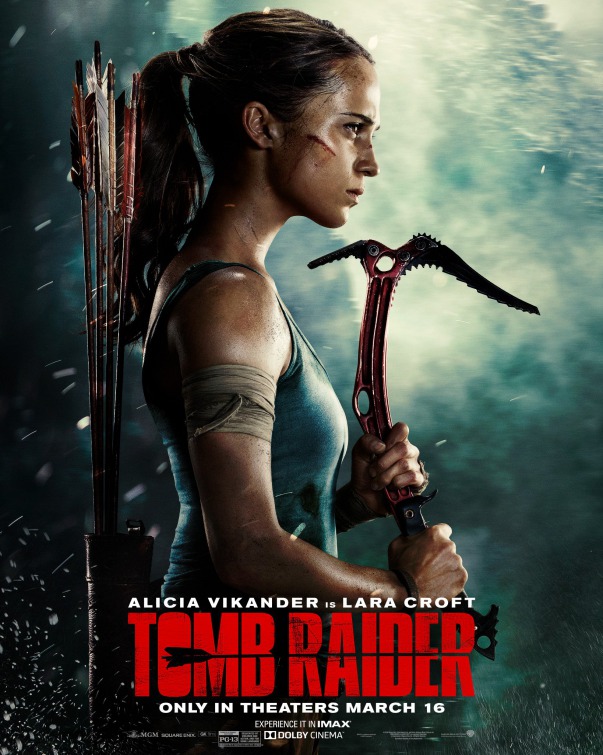 ow to start with a lot of back story delivered in the form of several information dumps that drag the plot down rather than enhancing it. This is broken up by some really impressive and kinetic action sequences such as a bike chase through London and a foot chase in Hong Kong. They make good use of Lara’s agility and quick thinking and establish her as a formidable presence.

Once Lara reaches the island the film becomes everything that it was advertised to be. The island portion of the film is a relentless onslaught of survival based set pieces that put Vikander’s Croft through a series of horrible life threatening situations. Many of these are a nod to the recent reboot video game with more than a few recreations of key moments folded into these sequences. Some might find them off putting as they do come across as a live action recreation but it didn’t personally bother me and it won’t be obvious to those unaware of the video game.

There’s a lot of variety to the action as well such as fast paced moments of jeopardy, impressive bow and arrow combat as well as frenetic puzzle solving making good use of Lara’s intelligence and problem solving skills. Some of this is clumsily edited and the climax drags on a lot longer than it needs to but there is plenty of entertainment to be had.

Alicia Vikander is excellent as Lara Croft. She has a lot of confidence bordering on arrogance tempered with a lack of direction and vulnerability that makes her an engaging lead. The scenes she shares with Dominic West form the emotional core of the film and deliver a father/daughter bond that feels natural. Vikander expertly sells the sorrow experienced by Lara at the presumed loss of this important figure in her life.

She also boasts really impressive physicality that serves her well during the various challenges presented to her. There’s clearly a learning curve involved allowing her to strike the right balance between larger the life and believable. The action feels visceral and grounded which suits this version of Lara Croft. Everything in the film is built around her character making the experience feel more or less tailor made to showcase the development of her skills and sense of adventure.

Mathias Vogel (Walton Goggins) is the main antagonist. He plays the role straight and sinister which offsets Lara’s more fanciful attitude. All told he doesn’t come across as a massive threat but does function as a suitable obstacle here and there. Using him to represent the perversion of historical discoveries is effective enough and Goggins’ performance goes some way towards making up for him being largely underwritten.

Daniel Wu’s Lu Ren is entirely surplus to requirements. There is supposed to be an arc from drunk and despondent to something more heroic but it fails to be compelling. Some early promise in striking a friendship with the naively determined Lara is quickly forgotten about and the character fades into the background without making much of an impression. There was definitely potential here but much of it may have been lost in scenes that were cut.

It remains to be seen if this will launch a franchise but all the ingredients are there for an adventure based collection of sequels with a strong leading lady and lots of potential to develop Lara. The film certainly sets up further instalments so hopefully they will see the light of day.

An entertaining and well cast adaptation of an iconic video game character. Alicia Vikander delivers an excellent performance and boasts very impressive physicality that brings this version of Lara Croft to life. Her character is interesting with a clear arc that carries her through the film. Lara’s relationship with her father comes across very naturally adding to her character development. The set pieces are impressive with obvious nods to the recent reboot video game and have a lot of variety to them with a mixture of solutions making full use of everything that makes up Lara Croft. Walton Goggins makes for an engaging yet forgettable villain with a performance that rises above how underwritten he is and Daniel Wu’s Lu Ren could have been cut with very little difference made. Whether a franchise will come of this or not is unclear but it certainly has the right ingredients and lots of potential for development.