A woman finds her life with her fiancé disrupted when his unhinged ex does everything in her power to make things difficult in Denise Di Novi’s Unforgettable.

I went to see this film because I thought there might be some interesting ideas behind it. A better version of this would have played up the terror and uncertainty brought on by suddenly becoming a step parent when you have no experience of being around children. Combine this with the effort it must take to move on with your life after an abusive relationship and there’s a lot of potential for really compelling character moments.

Sadly this film does absolutely nothing interesting. The story is hopelessly predictable and horribly put together. The film opens with a scene that leads to a flashback showing how things got to that point and it gives everything away which completely robs the rest of the film of any tension since it’s pretty obvious how things are going to come about.

There are some positives. Rosario Dawson delivers an excellent performance that’s definitely too good for this film. Julia is strong willed yet vulnerable and clearly damaged in many different way. Dawson’s performance never stops making this character likeable which made me wonder why she isn’t in a better film than this. 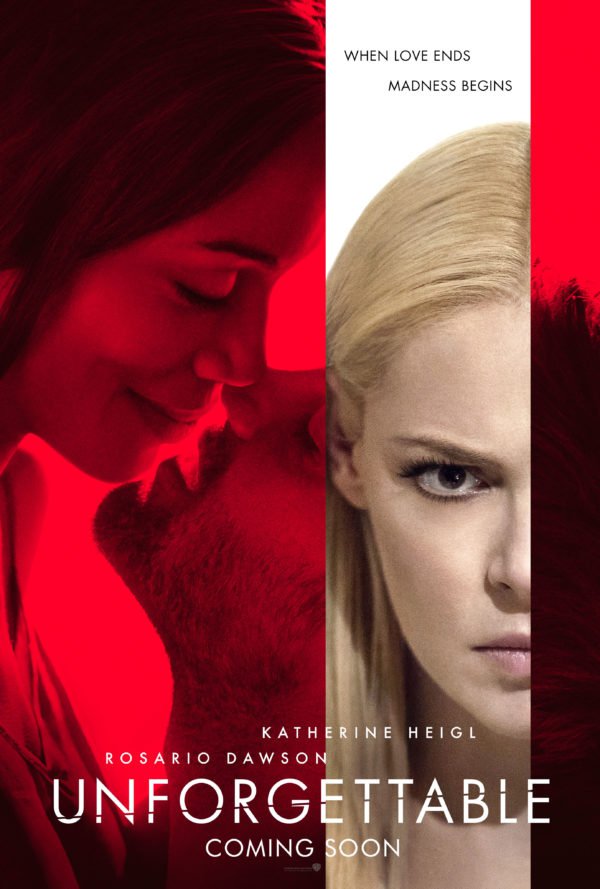 On the complete opposite end of the spectrum is Katherine Hiegl’s Tessa. She’s the clear villain of the piece and Hiegl plays her with all the subtlety of a bad Saturday morning cartoon villain. There’s nothing remotely likeable or even realistic about her and the performance is just painful to watch. I’d be willing to blame the script and possibly the direction for this as Katherine Hiegl is far from a bad actress but she doesn’t make any attempt to elevate what she’s given.

Some of this would be forgiveable if the film could be enjoyed as something “so bad it’s good” but the experience of watching it is so relentlessly dull that we can’t even say that. Long stretches go on where absolutely nothing happens and the scenes that are supposed to be tense fall completely flat on their face. I can’t help but think this would have been better if all involved made a really schlocky version of Fatal Attraction.

There are some moments that amuse mainly due to the stupidity of the characters. Throughout the film personal items go missing and people just shrug it off. It should be obvious what’s going on but the characters simply sleepwalk through the story completely oblivious to what is going on around them. It’s really bizarre but there is some entertainment value to be mined from these scenes however brief that might be.

An awful experience from start to finish.There are some interesting ideas in there that never go explored such as having to learn how to be a step parent when unprepared for it and moving on with your life after an abusive relationship. Rosario Dawson delivers an excellent performance that has no right being in this film. Katherine Hiegl is completely limp as a villain though I’m prepared to believe that it has everything to do with the writing and possibly the direction rather than her acting talents. At least if the film was entertaining in its stupidity there would be some enjoyment to be gained from it but the story is so relentlessly dull with really long stretches where nothing happens. There are some amusing moments due to character stupidity but these are few and far between.