Valerian and the City of a Thousand Planets

On this surface this film is really standard stuff as the main plot revolves around space cops trying to solve a broadly uninteresting mystery that holds the key to solving a much larger problem. The main plot in this film is neither compelling or new but the real draw here is the world that houses this plot.

This is one of the most fascinating science fiction universes that I have seen in a long time and Luc Besson was clearly more interested in showing it off than telling the story. In this case that’s definitely the right call as the universe this film inhabits is infinitely more interesting than the fairly standard issue space cops narrative.

The most striking thing about the universe this film inhabits is that very little of it is developed through exposition. All of the characters live in this world and understand it so there’s no justifiable reason for them spending time explaining how things work. There are some instances where clunky exposition kicks in but these are rare and the universe feels richer for it. Luc Besson takes every opportunity to show the audience something cool that takes full advantage of the potential afforded by the vast quantities of aliens with different technology and abilities. The film appears to be occasionally distracted from the world building by the story that needs to be developed which slows things down somewhat as the story isn’t that interesting. 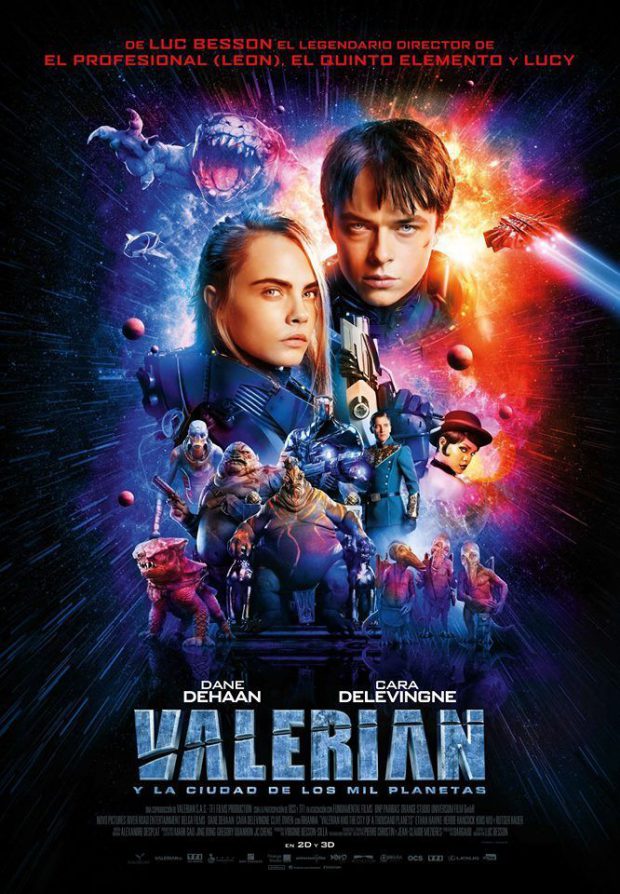 Valerian (Dane DeHaan) and Laureline (Cara Delevingne) are the focus of the story and these characters are mixed. On paper it’s all great as they are a crime fighting duo who also function well as a couple with implicit trust between them but in practice it doesn’t come across as well as it should. For one thing the romantic angle doesn’t really work as there is no chemistry between the leads which means that any hint of a relationship only comes across through really clunky dialogue.

The problem is largely with Dane DeHaan who feels miscast in the role. Valerian is established as a wise cracking cocky womaniser who has charisma to burn and easily earns the admiration of those he comes into contact with. Dane DeaHaan isn’t a bad actor by any stretch but the intended characterisation just doesn’t land here. This role might have been better suited to someone like Michael B. Jordan who can carry the arrogance believably. Cara Delevingne fares far better and the film would have been better if her character had been focused on more than she was. Some of the strongest scenes are when the pair are separated and Laureline has to work on her own. Delevingne has impressive presence and carries the film wonderfully.

As I’ve alluded to above, the film is a visual feast. The design work on the various aliens is impressive to behold with a wide variety of distinctive looks to the various species. Some of them look more ridiculous than others which definitely seems to be the point here as many scenes are played for laughs depending on how awkwardly a given alien behaves in relation to their surroundings. The general design work on the ships, locations and the Alpha -the titular City of a Thousand Planets- is impressive as well. Clearly the budget was used to help bring all of this to life in a visually arresting way.

The unique design work allows for some really creative and memorable set pieces. A personal highlight is an early sequence involving using personal wormholes to phase shift items and people to a different plane of existence. It’s enough to sustain an entire film on its own but for this film it’s but one of many creative set pieces. Another noteworthy inclusion is a memorable opening sequence chronicling the development of what would become the Alpha from our present day to the time the film is set. It plays out to David Bowie’s “Space Oddity” and efficiently promotes the idea that cooperation is the way forward be that with other humans or any alien we encounter.

Valerian and the City of a Thousand Performances is an expertly crafted sprawling science fiction universe with an abundance of really cool things to explore and incredible visuals. The design work on everything from the aliens to the locations is first rate and the world is built organically through exploring it rather than clunky exposition in most cases. The main plot is slightly underwhelming as it amounts to a fairly typical “space cops” type narrative but this feels like more of a distraction to the world building than anything else. The character of Valerian brings the film down somewhat because Dane DeHaan feels somewhat miscast but Cara Delevingne does a great job and has excellent presence. The set pieces are incredibly inventive and the film boasts an opening that will be long remembered by me.