John Michael McDonagh is a director of some previous note. His first work in the big chair, The Guard, took triple its modest $6 million production budget, and his subsequent film, Cavalry, was a critical success, picking up several nominations for its cast and crew, even winning a Best Actor award at the British Independent Film awards for Brendon Gleeson. With this as a backdrop, there is some expectation sitting on his third movie, War on Everyone, a dark comedy about corrupt cops. However this being said, the film’s trailer seems to have left people cold, with a distinctly cheap feel to its production, and a worry that the film would suffer from “all the best bits are in the trailer” syndrome, so I settled down to see what the next 98 minutes had to offer.

Unfortunately, this film is not good. It’s really not good. The story of two corrupt cops, played with notable acting acumen by Alexander Skarsgård (The Legend of Tarzan, Zoolander 2) and Michael Peña (Ant-man, The Martian), is one that somehow manages to be both too shallow for you to be that invested in, whilst also trying to be too clever for its own good. We are introduced to our two protagonists, Skarsgård’s Terry and Peña’s Bob, as they run down a mime in a back-alley. The mime, never breaking character, turns out to be carrying a large quantity of drugs, but before you worry about spoilers, all this is in the trailer. Just in case we are in any doubt that these aren’t your common-all-garden squeaky-clean heroes, we meet the usual tough talking, sarcastic boss, played with a nice subtly by Paul Reiser (Whiplash, Aliens), as he has a meeting with them as they come off suspension. This is all done with dialogue that is supposed to be witty, clever, and cutting, but is so convoluted that it goes past snark and hits straight-up unbelievable. 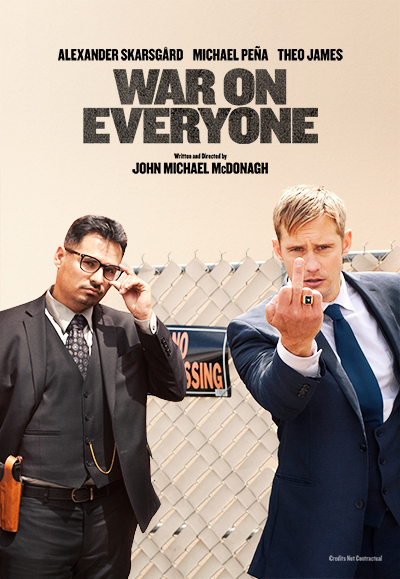 Our two heroes now go off and do their own sort of police-work, hitting up informants, using the drugs they busted for their own gratification, and generally being as likeably un-likeable as this stuttering screenplay can make them. We see that Bob has a wife who is much smarter than him, leading to more unrealistic banter, and kids, who he is borderline cruel to. Again, the script tries to play this off as witty, and edgy, but it really doesn’t have the charm to carry that off, so it comes across as uncomfortable, in-spite of Peña’s acting chops. Terry is a more complicated character, and he lives alone, and seems to be emotionally tortured, turning to excessive drinking. Skarsgård plays this beautifully, and his slumped posture, and slurred tones are a stark contrast to previous roles we’ve seen him in, where his nordic stature is played up to the max. He gets a love interest, and a random kid as well, but these are there mainly so we can have another smart, snarky character in the girlfriend, Tessa Thompson (Selma, Creed) showing again what excellent acting chops she has, and a plot driver in the case of the kid. Thompson’s character Jackie is also used as a reason to show off both Skarsgård and her fine physiques, and his yellow pants, in sweaty sex scenes where more smart banter is the order of the day. To be honest, the fact that they are having full conversations in the middle of these scenes merely adds to the impression that McDonagh is trying almost painfully hard to be edgy, rather than to tell a good story. There is a distinct wiff of mid-nineties black teen-comedies to the dialogue, such as Heathers, or Pump Up the Volume, only without the ground-breaking flavour they had, meaning we are just brought back to the very uncomfortable rawness of the direction and cinematography.

We also have a couple of main antagonists to the tale that McDonagh is trying to tell. Theo James (The Divergent Series, Underworld: Awakening) plays Lord James Mangan, a member of the english aristocracy, and all round “boo-hiss” bad man. He’s the brains behind a robbery that the boys stumble upon, and we are left in no doubt that he’s into all sorts of deviant and nasty stuff. His chief lieutenant is Birdwell, played with uncomfortable glee by Caleb Landry Jones (X-men: First Class, Byzantium). Birdwell is a really nasty character, but the method they use to bring this to the screen is by portraying him as some sort of 1970’s androgynous stereotype, all white skin, scarves, and unhealthy attitudes towards children. It’s borderline offensive, but to give him his due, Jones does put in an excellent performance, to the point you almost want to wash yourself to get the slime off you from just watching him on screen.

The plot plays out more or less as you’d expect, with little in the way of threat to the main players, or development to their characters. The story-line is lacking in guile, and the visuals are lacking in flair. There is an attempt at some cinematic flamboyance, particularly during a slow continuous tracking shot through Mangan’s mansion, but it’s nothing new, and adds little to the experience. The screenplay is so convinced of its own importance, the laughs when they do come, and there are actually a few in there, act as small punctuation to the tedium of the rest of the film.

The blame for the failures of this film really do have to lie at McDonagh’s door. The cast are all excellent, and do as best they can with what they are given, however as writer and director, McDonagh has served up something akin to a film-school vanity project rather than a motion picture. The story is disjointed, and fairly dull. The promised bad-taste and devil may care attitude that the concept promised, is almost entirely absent from the finished product. Given a decent screenwriter something interesting could have come from this, but unless you want to see Skarsgård in his pants, just move on, unfortunately the Everyone that the title references includes the cinema-going audience.