When We First Met

A man relives the day he met the woman of his dreams over and over again in an attempt to perfect the experience so that she falls in love with him in Ari Sandel’s When We First Met.

At first glance the subject matter of this film might seem really problematic as it can easily be read as a man being forceful and manipulative in order to “get the girl”. Considering all that is being frequently reported at the moment it’s possibly the wrong time for this sort of film if indeed there is such a thing as a right time.

I’m not really here to debate the morality of the existence of the film though if it was overly chauvinistic then that’s something I would absolutely comment on. The truth is that this film doesn’t really do enough to be considered offensive which is sort of the biggest problem with it. It merely exists and doesn’t do an awful lot to justify that existence.

Noah (Adam Devine) is very much a pathetic character who has spent three years pining over a woman that he shared what he considers to be the perfect evening with only to be promptly friend zoned. Showing how this meeting plays out is one of the few clever things the film does as it takes the form of a flashback that doesn’t end with it being the foundation to a new relationship.

When Noah discovers a magic photo booth he finds himself back at the start of that fateful day and tries to engineer it so that the woman of his dreams chooses him instead of the man who will be her fiancé. I’m a sucker for Groundhog Day style stories so this is what got my attention about the concept. 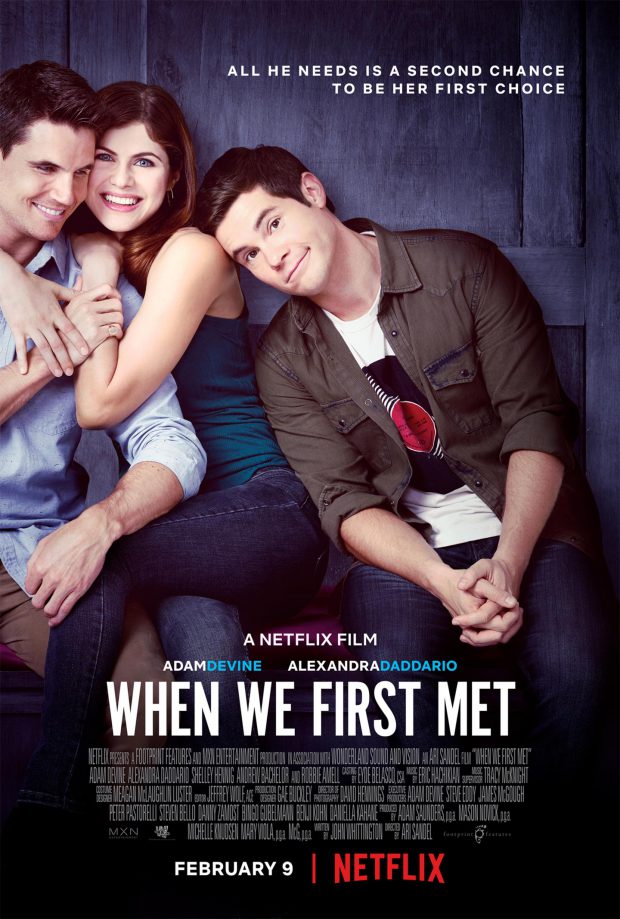 Replaying a day means that there has to be a lot of detail to that day to be focused on and the film does a good job of building that. Noah’s memory of meeting Avery (Alexandra Daddario) is very vivid and the Halloween party is rife with detail that can be played around with in future depictions of it so the basis for the idea is reasonably strong. Strangely enough the film largely fails to capitalise on the concept as we only see a small number of repeats with few of them standing out as being particularly creative or memorable in their own right. Noah always meets Avery and she always gives him more attention than he arguably deserves but a lack of ambition stops the film from exploring the sheer lunacy that could result from repeating the same night over and over.

This is very much Noah’s film and Adam Devine engages with the material well enough. I’ve already mentioned that he’s a pathetic character and that is never lost throughout. Impressively he has absolutely no chemistry with Alexandra Daddario which is actually the point of the whole story. The attraction is entirely one sided and no matter what she does there’s no way she can see him as anything other than a friend. He might be able to manipulate the situation so that she ends up with him but she’s always miserable when that happens so the film is less about getting the girl and more about appreciating what you already have. It feels unique as lessons go for a romantic comedy which does make it stand out more than it otherwise would.

Not that this makes is altogether worth watching as it has significant problems on almost every level. Noah’s a difficult character to invest in because he is so needy and pathetic which makes the scenes featuring him trying to woo Avery almost painful to watch. Ultimately every scene is about his obsession with her and it borders on creepy far too often though this is amusingly addressed on more than one occasion.

Another issue is that nobody outside of Noah is really a character. They are all a collection of story requirements in Noah’s story which makes it difficult to engage with them as well. Alexandra Daddario plays her part well but Avery is little more than the ideal woman that Noah wants to be with which is fine as that’s how he sees her but very little is done to explain why that’s the case and there’s no real sense of the friendship they have that’s supposed to be so important to her. Shelley Hennig as Avery’s friend Carrie is the closest thing this film has to a defined female character but even she only exists as a sounding board for Noah and the deliverer of harsh truths. Naturally in a film like this both female characters exist as little more than love interests for others.

Avery’s fiancé Ethan (Robbie Amell) comes across as nothing more than the obstacle to be overcome though the consistent characterisation as a “nice guy” who can’t be hated is obvious yet mildly interesting and Noah’s best friend Max (Andrew Bachelor) is just that, a best friend who helps or hinders him as the story requires.

A fairly dull film that fails to live up to its limited potential and wastes the Groundhog Day concept with uninteresting scenes that don’t allow the lunacy of the concept to play out. Noah is very much a pathetic character which makes him difficult to invest in though I do like the idea that the attraction is entirely one sided and there’s nothing he can really do to change that. The lack of chemistry between Adam Devine and Alexandra Daddario actually has a point within the story and makes it about something more than a simple tale about finding true love; it’s more about the reality of how relationships come to be defined and acceptance of the fact that feelings will often go unrequited. Sadly the film doesn’t take the time to explore the idea in the depth it deserves and none of the other characters rise above their purpose within the story so the entire thing reeks of missed opportunity.