An uptight father butts heads with his daughter’s inappropriate internet millionaire boyfriend in John Hamburg’s Why Him?

Frequent readers of this site will know that I don’t watch many comedies because the style of humour isn’t really to my taste very often. This particular one appealed to me because of Bryan Cranston. I think he has great comic timing and a return to his comedy roots was something I really wanted to see.

This film is a really mixed bag. Parts of it work really well but they are dragged down by the parts that really don’t. James Franco’s Laird Mayhew is about as inappropriate as it gets. Practically every line he has is punctuated by cursing and his behaviour isn’t what anyone would consider normal. The film actually provides reasons for that with his troubled childhood and the fact that his status as an internet millionaire means that he has experienced the real world so doesn’t actually know how to behave.

It’s actually pretty solid character work and James Franco is perfect at playing the inappropriate manchild. If nothing else there’s plenty of entertainment to be had as he fully commits to this insane performance. At times I found the character to be too obnoxious but that’s probably personal taste as it seems that it was exactly what the film was going for. 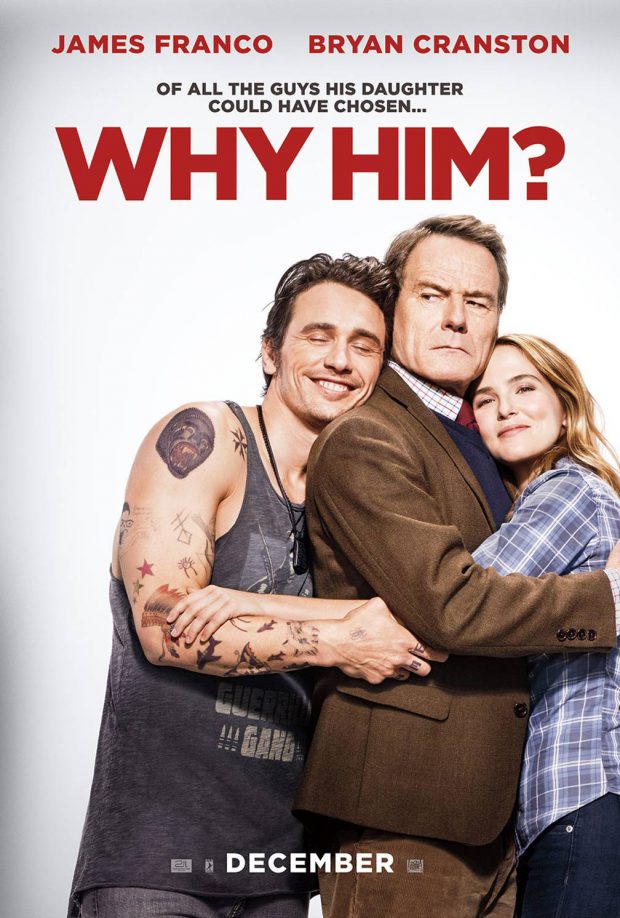 Bryan Cranston’s Ned is pretty much the opposite of Laird. He’s uptight and completely set in his ways so has trouble dealing with this free spirited attitude that Laird constantly throws in his face. Cranston can deliver so much with a look and many of the biggest laughs come from his understated reactions to the way Laird behaves.You can see him taking a deep breath and counting to 10 while he grits his teeth and it’s the perfect contrast to Franco’s over the top performance.

Another memorable character is Gustav (Keegan-Michael Key), Laird’s personal assistant who offers him bizarre advice and attacks him at random intervals to keep him sharp. Some of the best scenes in the film involve this character and a lot of the laughs are caused by his bizarre yet professional behaviour.

Megan Mullally as Ned’s wife Barb is a bizarre one. Mullally is really good value but the characters seem oddly mismatched as a couple. This is particularly evident as the film progresses. Barb is also inconsistently written to the point that it’s difficult to pin down exactly how she feels about the situation. She pretty much faded into the background at one point and never comes out again. It’s a wasted opportunity as it might have been worthwhile to have Ned facing the force of nature that is Laird while his wife isn’t actually on his side. There is the suggestion of that but it doesn’t really go anywhere interesting.

Another missed opportunity is in the form of Ned’s daughter Stephanie (Zoey Deutch). She’s good enough in the role but isn’t actually in the film that much despite the whole plot hanging on her convincing her father that Laird is the right man for her. The relationship between Stephanie and Laird is difficult to invest in as there’s no real evidence for why they are so good together since they share so little screen time. Having the audience invest in their relationship would have definitely enhanced the film and had the added bonus of the audience not understanding Ned’s disapproval. There’s so much comedy in that and the film doesn’t capitalise on it.

Many of the jokes really don’t work as the film spends most of its time trying to make the audience cringe. There are scenes that started out funny but go on for so long that any comedy potential is completely drained from the situation. It’s impressive how many times this film transitions from funny to awkward in such a short time and it’s all to do with how long scenes linger without any payoff.

There is the suggestion of further depth in the story such as a subplot about the changing face of industry. Ned represents the old way of working with his printing business that is quickly going down the tubes and Laird represents the new with his internet business. There is some strong material in there that isn’t developed as well as it could be which is a shame as it is another interesting contrast between the characters. The film does at least have a somewhat unconventional ending that genuinely surprised me so that’s something.

A solid enough but forgettable comedy that wastes a lot of its potential with scenes that linger past the point where they are funny. James Franco and Bryan Cranston are both great in their roles and the contrast between the characters works really well. With the exception of Gustave the other characters don’t come across all that well and the film fails to establish Laird’s relationship with Ned’s daughter Stephanie as being something worth investing in. There is the suggestion of depth in the old industry vs. new debate that sits under the surface but doesn’t go anywhere. It does have a refreshingly unconventional ending that surprised me though.