The first film is among the strongest entries in the recent DC comics adaptations and fans have been waiting for a follow-up for quite some time. Unfortunately the pandemic delayed it a number of times until it finally saw a recent release in limited cinemas and on streaming. Wonder Woman was celebrated for its focus on Diana as a character with her old fashioned heroism, her compassionate nature and significant growth being handled well. It had its flaws but it certainly broke the curse of dire female led cinematic superhero outings and there was a definite eagerness to see the character again. 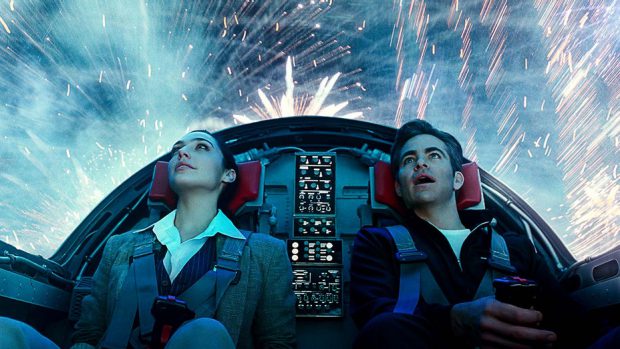 This outing propels her far into the future from the first film’s setting of 1918 to 1984 amidst the backdrop of the Cold War, corporate America and fashion statements. Diana is living her life working in the Smithsonian while moonlighting as a superhero that remains a mystery. It’s established early on that she has chosen to distance herself from the world around her so she keeps to herself in her personal life and operates from the shadows -figuratively speaking, the early action sequences take place during broad daylight- as Wonder Woman. In other words she lives in the world but isn’t a part of it. This is because she still pines for the lost Steve Trevor (Chris Pine) and can’t bring herself to open up to anyone again after experiencing that loss. It’s laid on a bit thick but it gets the point across as a starting point for her character arc.

A challenge to her status quo comes when a mystical stone with the ability to grant wishes is found and she unwittingly wishes Steve back into existence which allows one of the strongest aspects of the first film to make a return. The Diana/Steve dynamic is easily the best thing Wonder Woman 1984 has to offer with their natural chemistry easily selling their connection, Chris Pine’s perfect comic timing giving rise to a lot of endearing moments and Gal Gadot’s Diana visibly letting her guard down around her. Since Steve is the one unfamiliar to what the world has become in 1984 the “fish out of water” setup from the first film is reversed with Diana now taking on the role of teacher. It’s charming to see though replicates a few too many beats from the first film such as the trying on clothes montage and general delight mixed with confusion towards everything unfamiliar. To be clear it still works but it is a little derivative.

Two villains plague Diana throughout the film. The first is a failed businessman by the name of Maxwell Lord (Pedro Pascal) who dreams big but is unable to deliver on what he promises and the second is Barbara Minerva (Kristen Wiig); a wallflower desperate to be noticed and respected for what she can offer. In general the film bites off more than it can chew with the two villains as neither of them really rise to the occasion as the true antagonist and there is a consistent failure to spotlight them in the right ways. Their stories are connected to a degree but it feels forced to the point that it’s almost as if two films have been awkwardly stitched together. This is especially evident in the climax where the screenplay forces them to come together for flimsy reasons. 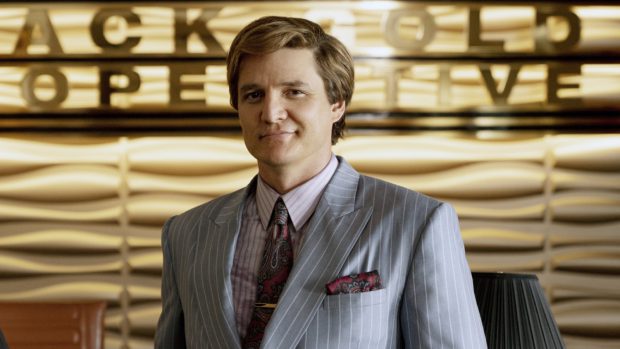 In terms of characterisation there’s a lot to recommend about them. Maxwell Lord’s false bravado to hide his failures is played brilliantly by Pedro Pascal who generally inhabits the character wonderfully. He’s the very definition of writing cheques that can’t be cashed and the stress it causes him as it catches up with him is nicely woven into his performance. The film is perhaps a little too overt with likening him to a particular figure that people will be painfully aware of in our own world but there is a complex character in the performance that the script isn’t quite able to properly support. The elements were there but the focus needed to be tighter than it was.

Barbara is the sort of character that wouldn’t be out of place in an ’80s movie; the shy and retiring type desperate to be noticed and valued while being ignored by everyone around her. Early on there are definite callbacks to Michelle Pfeiffer’s Catwoman from Tim Burton’s Batman Returns though she goes in a very different direction. The character links to the sometimes explored theme of image and superficial beauty demonstrated by her being noticed coming with a new look that makes her stand out to others. More could have been done with her direct connection to Diana and highlighting what she wants from life. Her descent into villainy doesn’t happen all that organically and the film takes too long to deliver her first confrontation with Diana. It’s a symptom of the film looking to do too much and not using the time effectively to put it all together in a satisfying way.

Other than the theme of image and superficial beauty there are other ideas at play. Diana needs to learn a lesson about being part of the world she lives in and protects while Maxwell Lord and Barbara need to learn a lesson about entitlement around what they have wished for as well as recognising what they have in their own lives. There’s also a lot said about the dangers of wish fulfilment, the consequences of getting whatever you want no matter the cost and the dangers of greed. All of this is touched on throughout the film and forms the basis of the message the film is trying to convey though it isn’t always successful in communicating this because it’s muddled in the execution. A tighter script with focus on a smaller number of elements would have helped immensely. 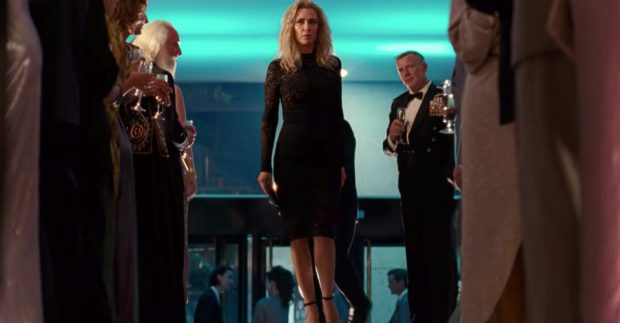 Amazing what a new dress can do for your social standing

A superhero film is always going to have a great deal of action and unfortunately there’s nothing in this film that sticks out. There are some strong visual flourishes in bringing the 1980s to life and the warm bright colours associated with Diana as well as the world around her but the action fails to captivate. The strongest sequence comes at roughly the midway point with a vehicle chase shown in the trailers but there’s nothing especially remarkable about it. Similarly the hand to hand action sequences are competently produced but also far from memorable. There is also a disappointing deployment of the tired superhero trope of having the hero depowered or losing their powers to increase tension. Despite this being Diana’s fourth live action appearance -it’s unknown how many of these remain canon- there’s still no indication of how powerful she is or what her limits are but having her weakened for a large part of the running time was unnecessary as it failed to impact the sequences in any real way.

It was refreshing to see that the resolution doesn’t come by way of a large scale action beat; instead it dials into what makes Diana interesting as a character with her natural compassion and ability to inspire being a significant focus towards the end of the film. It made for a unique climactic moment that speaks to who Diana is rather than what she can do and ties into her arc around being disconnected from the world at least to some degree. With a little more polish the film could have been great, instead it ends up being pretty good with a lot of room for improvement. 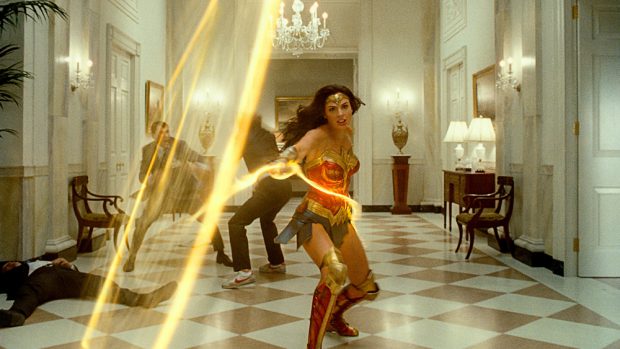 Time to drop some truth!

A solid follow-up that excels in its characterisation, overall visual aesthetic and the way it tackles certain themes but fails to captivate in terms of action and has too much going on to be entirely coherent. Gal Gadot’s Diana and Chris Pine’s Steve Trevor are the strongest aspect of the film with their relationship being consistently charming to watch. Reversing the dynamic from the first film works well even though it’s a little too derivative. Both villains are well performed and have compelling setups but suffer from fighting for time in an overstuffed narrative that doesn’t have room for both of them. The film has a lot to say and is successful in conveying the messages to some extent but it takes on too much meaning that the end result is muddled. Visually the film has a strong appealing aesthetic but none of the action sequences manage to be remarkable or memorable though it is appreciated that the climax hinges on who Diana is rather than what she can do. With a little more polish the film could have been great, instead it ends up being pretty goof with a lot of room for improvement.