Your Name/Kimi no na wa

Scotland Loves Anime is a fantastic festival, and it returned to Edinburgh and Glasgow this October with an exceptionally impressive programme. One of the undoubted jewels in the crown of this year’s programming was Makoto Shinkai’s latest offering Your Name. Best known for 5 Centimeters Per Second and The Garden of Words, Shinkai seems to have broken new ground with Your Name, being the first non-Studio Ghibli animation to break 10 billion yen at the Japanese box office, and is gaining a general release here this November. It’s also his first truly full length feature, running at 106 minutes, which is a blessing for us the viewers, as this film is a delight.

The story centres around young Mitsuha Miyamizu, voiced by Mone Kamishiraishi (Wolf Children), a young woman and high-school student in a small Japanese town, who feels constrained by the traditions and tranquil life her home offers, and dreams of moving to Tokyo. Her counter is a young man called Taki Tachibana, brought to life by the voice of Ryûnosuke Kamiki (Spirited Away, Howl’s Moving Castle), who is living a hectic life in the very city Mitsuha craves to be. From here our heroes find that they swap places at random times, inhabiting each other’s bodies and living each other’s lives for a day, then waking up back in their own bodies, and dealing with the chaos each other has sown to their everyday lives. They find that leaving diary posts on their phones allows them to get to know each other, and warn their compatriot in these outlandish events of any notable occurrences. To tell you more of the story would spoil a wonderful journey for you, but suffice to say you will laugh, cry, and be uplifted come the end of the tale. 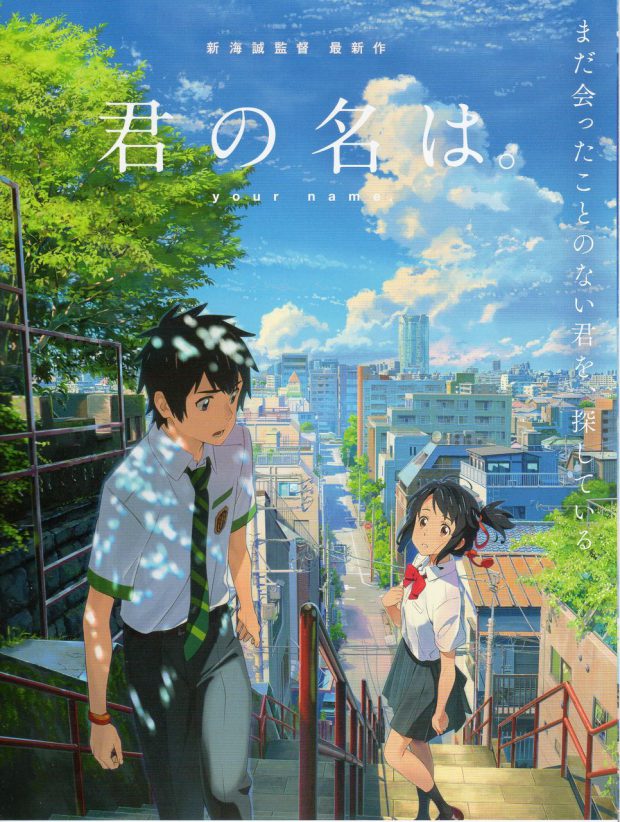 The script, written by Shinkai himself, is excellent, and the English subtitles are easy to follow, and don’t take your eyes away from the beautiful animation for any longer than they really need to. Shinkai has penned characters with real humour and depth, and all the supporting cast have their own strong points and idiosyncrasies that make them feel three dimensional, and encourage you to like them even more than you would naturally given their place in the story. Every line has a point, and Shinkai doesn’t feel the need to over-explain, with some relationships, and back-story hinted at and alluded to in a way most Hollywood fare wouldn’t have the confidence to do. The film is also funny, with the audience laughing out loud in our screening much more than I’ve heard in quite some time. One recurring joke in particular, to do with waking up in each other’s bodies, brings laughs no matter how often it was used.

I’ve mentioned the animation already in passing, but it’s difficult to overstate how sumptuous the visuals are. From the start of the movie, when the two protagonists are looking up into the sky to watch a falling star, for the camera to then follow this chunk of rock as it travels through clouds, is breath-taking. And the work of the animators does not slacken at all as the story unfolds. From the hustle and bustle on the Tokyo trains, to the quiet calm of Mitsuha and her grandmother weaving brightly coloured cords, there is not a frame of this movie you would not want to hang on your wall.

The only real downsides to this movie are that it won’t be everyone’s cup of tea, and some of the teen angst, which is rare in the story, may grate a little with sterner personalities than mine. As for the first of those criticisms, I will admit that, until recently, my knowledge of Japanese cinema only really stretched to Studio Ghibli and Toho Company Godzilla movies, but films like this can only help to widen people’s perceptions of what is out there. Even though a 106 minute subtitled Japanese animation may not be your first choice, you may find Your Name surprising if you give it a chance. The second point is more difficult to refute, but if you are willing to let the story unfold in the organic way that it does, with all the plot twists and revelations, you’ll find your time well rewarded.

What Shinkai has done with Your Name is give us a universal tale of the invisible ties that bind us all, and although that message may be a well worn one, Your Name takes a genuinely fresh approach to it, adding a depth sorely lacking in most of today’s cinematic releases, and as a result it will leave you elated. Your eye’s will feast on the cinematography and artwork, your mind will have been entranced by the novel and twisting plot, and your heart will be a little bit bigger for letting yourself be fully engrossed in the storytelling. Maybe even enough that by the end you’ll just want to go back to the start and watch it all again.