Zack Snyder’s Justice League provides the director the opportunity to release his version of the superhero team-up that was heavily altered when it was released theatrically in 2017.

Firstly, the elephant in the room that needs to be addressed is the theatrical cut of this movie. Joss Whedon was brought in to oversee reshoots and recut the film into something easily digestible by audiences back in 2017. Everything around that including the journey towards this version being released is well documented so it isn’t something this review will cover. To answer the obvious question upfront; this is significantly better than the theatrical version but this piece won’t spend any time comparing this version to the one that came before because that’s not a fair basis for critique so this coverage will focus on what it delivers at face value. 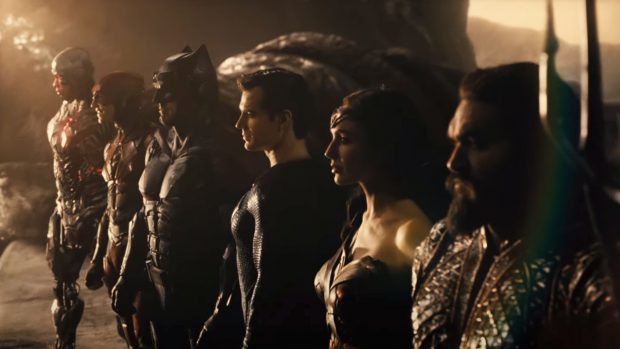 Everyone line up and pose

The plot initially revolves around Bruce Wayne aka Batman (Ben Affleck) working to bring together a team of superheroes in order to prepare a fighting force against an alien threat he’s sure is coming. In the wake of the death of Clark Kent aka Superman (Henry Cavill) as depicted in Batman V Superman: Dawn of Justice he wants to honour the man he misjudged by creating a team to carry on the positive example he worked to set. A significant chunk of the running time focuses on his attempts to convince the disparate heroes to agree to join and the complications that brings with the rest centred around dealing with that threat. It’s light on thematic exploration though the theme of unity connects to both the heroes and villains therefore creating a purposeful narrative encompassing both sides.

An obvious thing that stands out about this is how long it is. The total running time including credits is slightly in excess of four hours which would seem too much for a film like this -or indeed any film- but it ended up not being a problem because of the way Snyder chose to structure it. The film is split into chapters with each of them having a specific focus that is more or less resolved by the end before moving the narrative onto something else. In that respect it feels more like binge watching a miniseries than watching a movie. This is supported by scenes that linger far longer than they would in a theatrical release meaning there’s extra time to focus on the detail of what those scenes are about. If the viewer chooses they could consume it chapter by chapter rather than absorbing it in a single sitting. Pacing is variable throughout but for me it never slowed to the point of becoming tedious and much of the detail being delivered was engaging enough by itself.

This approach means that there’s a lot more time for character work though the success of that is variable depending on the character. Ray Fisher’s Victor Stone aka Cyborg receives more attention than any other character with the circumstances of his origin explicitly connecting to the villain plot in a major way. His tragic backstory and strained relationship with his father Silas Stone (Joe Morton) all come together to craft an engaging sympathetic character to build the film around. It isn’t quite his story but he’s as close to a protagonist as the film gets. 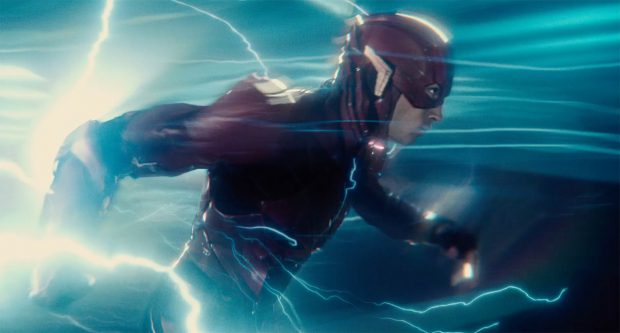 Gal Gadot’s Diana Prince aka Wonder Woman receives plenty of attention but spends a lot of her screen time being framed as the bringer of information due to her people having the historic knowledge of the forces at work and how much of a threat they are. She blends well into the team dynamic overall and is really well used during the action sequences she participates in as well as using her particular brand of empathy to meaningfully feed into some key scenes.

Barry Allen aka The Flash (Ezra Miller) starts off as something of an outcast motivated by proving his father’s innocence and transitions to an audience surrogate in a way with his tendency to comment on how impressive things are. He’s excited to be brought into this larger world of superheroes and epic battles but goes through an arc towards realising the enormity of what he has become involved in. Essentially he’s an inexperienced hero forced to grow up much faster than he would prefer to.

Arthur Curry aka Aquaman (Jason Momoa) is largely defined by his bitterness and his reluctance to accept his heritage. He is repeatedly shown to be using his abilities to help those in need and feels compelled to join the team when he becomes aware of how much is at stake. His contrarian nature often provides a much needed buffer to ask the more difficult questions around what is being planned and he has some meaningful moments with Diana fuelled by the tense history between their people. 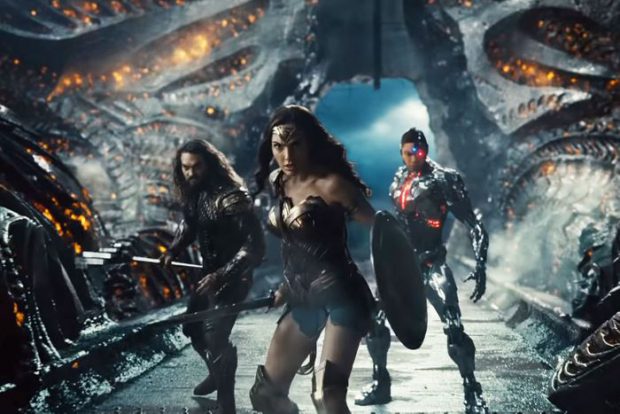 Bruce Wayne aka Batman is characterised as a cynic trying really hard to become an optimist. After years of believing that everything is descending into darkness he has taken his own nihilistic viewpoint to task and is actively trying to bring hope to a world that is about to be under catastrophic attack. He adopts a natural leadership role on the team and keeps highlighting the importance of it existing while constantly referencing what he is trying to do. It’s a natural progression from his characterisation in Batman V Superman: Dawn of Justice and his renewed outlook helps keep the narrative moving.

Clark Kent aka Superman is unfortunately poorly served. He doesn’t appear until very late on so has a lot less time than everyone else but the time he has isn’t used well. There are some strong moments shared with Lois Lane (Amy Adams) and the content around his resurrection works well enough but for the most part he’s deployed as a blunt instrument utilised for his powers and little else. No attempt is made to slot him into the team dynamic nor is any attention given to him following the climactic action sequence. His black suit also goes unexplained therefore securing it as a detail that was only put there because it was believe it would be a cool addition though it stands out because there’s no reason he wouldn’t use the traditional costume.

The main villain, Steppenwolf (Ciarán Hinds) is another issue the film has as there is nothing to him as a character. He is imposing and threatening but it is made very clear that he’s a subordinate to a greater threat which means that he’s something a placeholder in the grand scheme of the narrative. He also has a an unfortunate tendency to vocalise his own motivations to himself which comes across as clumsy. He has no relationship to any member of the Justice League nor are any of his interactions all that meaningful. 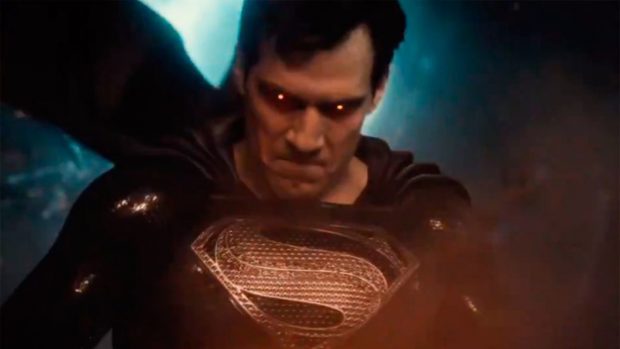 A general issue the film has is that it overindulges at times whether that be in very long slow motion sequences that drag on longer than they should, dialogue exchanges that make their point clearly and then continue beyond the point that they’re interesting or repeating character beats that are well established at earlier points. The freedom granted Snyder in putting this together has its drawbacks in those areas though it’s not enough to derail the overall experience too heavily.

Visually the film is very impressive. Many of the shots are as if ripped directly from the pages of a celebrated comic book and the action sequences are impressively visualised and choreographed with each character having a particular visual flair unique to them. At times the CGI could be considered ropey though it doesn’t detract as it all blends into a hyperreal visual aesthetic so everything feels as if it belongs to the film even if the seams can be seen on the effects work. Snyder indulges his love of intricately sculpted imagery and often frames the heroes in a way befitting mythological figures which ties in with his overall view of these characters.

In general this is to be viewed as a curiosity based on work that was unfinished. If this had been released in 2017 it would have been a great deal shorter with a lot trimmed from what is presented here. It’s worthwhile by itself to see the work completed in this way and get an idea of what could have been if things had played out differently. When considering how well this turned out it’s unfortunate that this is likely the last that will be seen of this vision for the Justice League. 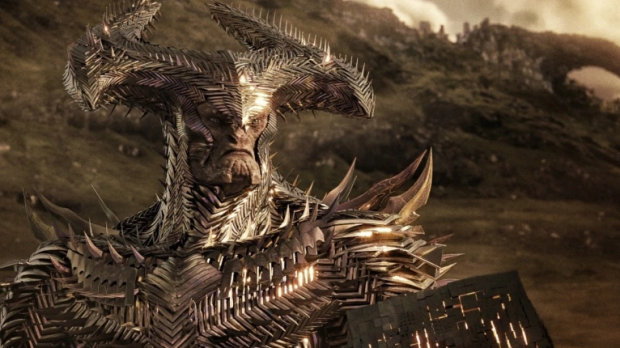 Born to be wild!

A strong viewing experience that blends excellent visuals, compellingly detailed characterisation and a well crafted story to create a truly unique superhero blockbuster that is a worthwhile viewing experience by itself. Most of the hero characters with the exception of Superman have plenty of opportunity to shine and bring something important to the table when they are together. The action is visually striking and well choreographed with each character used well within them. Visually the film is stunning though has some ropey CGI that does blend into the overall hyperreal aesthetic but may deter some. The running time could also be a deterrent though the possibility exists to view as a miniseries rather than a film. One major weakness is the villain who is never properly characterised and feels like a placeholder for a bigger threat. There is a tendency to overindulge in long slow motion sequences, overblown dialogue and repeated information but in general this is a very worthwhile viewing experience that provides a view of what could have been.