Arrow toys with a new status quo when Diggle takes up the mantle of the Green Arrow as Oliver adjusts to life without a double identity.

I mentioned last week how much potential the idea of Oliver passing the torch to someone he trusts while still being on the show has and I definitely stand by that. There is lots that can be done with it and it allows Arrow to evolve in a show in a way that superhero shows typically don’t. 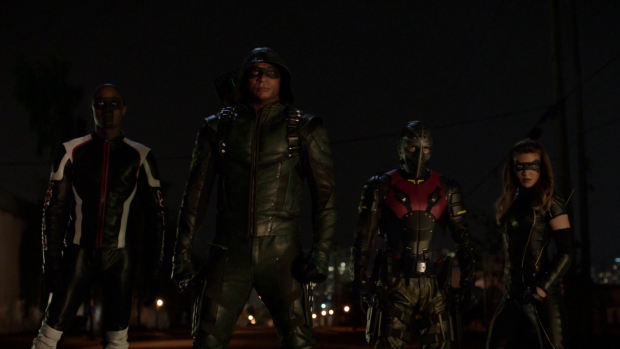 This episode doesn’t squander that potential but it also doesn’t take full advantage of it. The plot basically amounts to a pretty standard “hero rising” story with a twist at the end. Diggle is plagued by self-doubt and to an extent a lack of confidence in his ability to lead from his team which is resolved by working at it to overcome the problem. It’s a proven story and easy to latch onto but I feel that more could have been done here without the whole thing feeling somewhat predictable.

The hero’s journey is one of the oldest and well used stories imaginable. It endures because it works and people generally love an arc where someone realises their full potential and improves over time to make themselves the hero of a given story. Diggle’s arc in this episode is a riff on that idea and his conflict has to do with coming to terms with being in charge of the team which means being responsible for them in different ways than he is used to.

Oliver’s automatic assumption was that Diggle would be more than capable of leading the team instantly but the reality of the situation is far different to how Oliver sees it. Diggle has led the team before but it has always been a temporary measure when Oliver was otherwise indisposed so there was always an expectation that he would turn leadership back over to him. The exception to that was in season 3 when Oliver was believed dead but it wasn’t actually defined who was in charge at that point so it’s a slightly different situation. In this scenario Diggle has assumed leadership of Team Arrow and as far as anyone knows it’s on a permanent basis.

There’s a few interesting things about this. Chief among them is Diggle’s physical and psychological injury. It’s a problem that Dinah knows about and she isn’t shy about confronting him so that causes friction immediately since Diggle is having his leadership contested. Dinah is concerned for the welfare of the team above else though she is definitely worried that Diggle will get himself killed. Despite her misgivings she chooses to keep the knowledge to herself and trust that Diggle won’t jeopardise the well-being of the team out of a misguided sense of pride. Diggle insists that the tremor is gone and he’s up to the task but Dinah isn’t convinced. 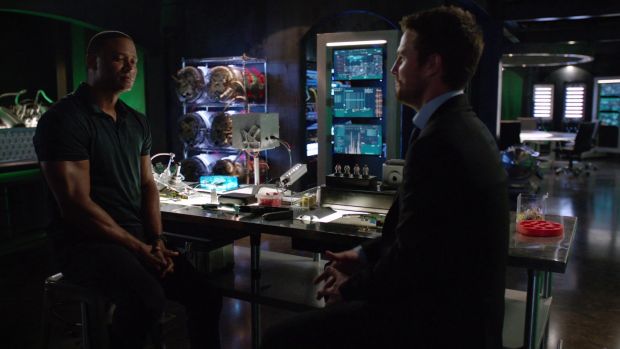 Eventually he does prove that he is capable of shooting straight but the ending showing him injecting himself with something clearly shows that he is in over his head. Unfortunately this probably means that his tenure as Green Arrow won’t last long but we might get some more episodes worth of exploration of how he handles the role.

Rene has reservations about this as well. His fears are confirmed after a botched mission that creates a lot of friction as Rene’s faith in Diggle as a leader is shaken. This follows on from him almost getting Rene killed in the first episode of the season which makes his concern justifiably cumulative. He even feels that he has to go to Oliver to report that his successor is in over his head and that Team Arrow needs its original leader back. It’s a different way to look out for the welfare of the team and shows how far Diggle has to go to earn the trust of those he leads. Diggle’s attitude doesn’t really help as he insists he can handle it without outwardly admitting his failing.

Oliver’s reaction is measured and mature. He doesn’t necessarily expect Diggle to hit the ground running in his new role so feels comfortable in the knowledge that there will be a few teething problems along the way. His faith in his friend is never shaken and he’s willing to allow Diggle the time he needs to settlie into his new position. It probably helps that his mistake didn’t result in any fatalities so it might be interesting to see how Oliver reacts should Diggle make a mistake that results in someone dying though his pep talk does go into the inevitability of loss so maybe it would have simply been a slightly different conversation if the mistake had been more costly. 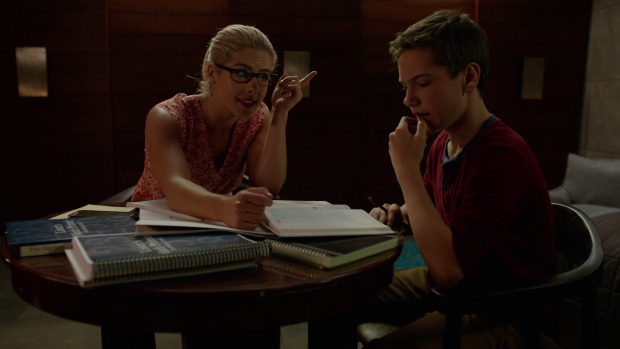 I really liked the role reversal in the Oliver/Diggle relationship. Diggle is essentially season 1 Oliver who retreats into himself once he makes a mistake and obsesses over it endlessly. In those situations Diggle is the voice of reason who inspires Oliver to keep going. Oliver takes on that role here and offers his years of experience as an example of it being possible to come back better than ever. He also points out that if it weren’t for Diggle then the Green Arrow wouldn’t exist as he was a major influence on Oliver moving away from crossing names off a list. In essence Oliver’s conversation sums up exactly why Diggle is the right man for the job.

This episode was fairly light on Oliver which makes sense when it comes to developing Diggle and only includes the other characters as far as they are needed to support Diggle’s story. Oliver’s scenes were focused around keeping Samanda Watson off his scent. She proves her intelligence by immediately recognising the possibility that Oliver Queen has someone else wearing the Green Arrow outfit. She notices that no arrows have been fired during his appearances which is immediately suspicious to her but actively solved by the end of the episode.

Oliver’s time as Mayor is taken up by his attempts to stop an Anti-Vigilante law being passed in Star City. He makes a passionate appeal against it with the reasoning that Star City’s vigilante presence allows the SCPD to spend their time protecting people with the help of costumed heroes. His argument is that if the police force dedicate their time to hunting vigilantes then the people will be far less safe as a result. It’s a strong argument with merit but not enough to stop it so he invokes a clause that allows the vote to be a public one. Star City’s referendum on whether vigilantes will be tolerated is an interesting prospect as it allows the show to fully explore the reaction of the common man to the team that work tirelessly to help them. Depending on how this angle is explored it could make Star City feel like a living breathing entity rather than a simple backdrop for action. 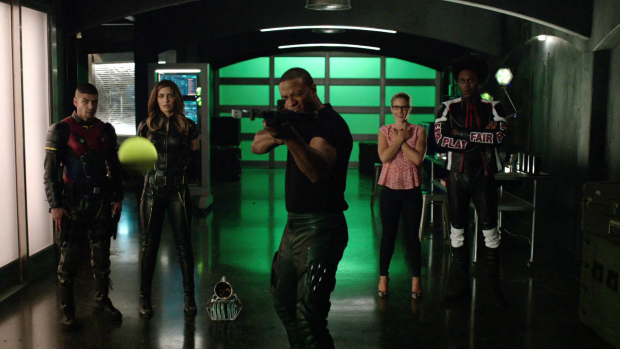 Diggle gets his groove back

The rest of Oliver’s time is taken up by fatherhood. William is stressing out about a maths test and Oliver gives him some really bad parental advice. He tells William that getting a C is fine once in a while and that school doesn’t really matter in the real world. It’s terrible advice and William responds as if it is though Oliver’s position is understandable as he is trying to reassure his son that life doesn’t stop if he happens to fail a test. His heart is in the right place but the approach he takes is completely the wrong one. It’s good that the show treats this as a learning experience for Oliver who will make a lot of mistakes as a father as he is completely unprepared to be one. He’s so desperate to be a good one but doesn’t know how to go about achieving it.

Once he realises that William is strongly motivated to achieve academically he drafts the best mathematician he knows to help. Felicity shares a really good scene with William where she points out that school changed her life and makes him feel better about the frustration he’s experiencing. William getting an A on the test proves how positive an influence Felicity is in his life and leads Oliver to reignite their relationship. I’ve opposed this in the past and my stance hasn’t changed but as long as angst is left out of it then I’ll be content enough.

The episode underwhelms on the villain front. Onyx (Chastity Dotson) is very much a means to an end as far as antagonists go. She’s skilled enough to give the reconfigured team a run for their money but does very little that can be considered memorable. I was very impressed in her involvement with an unconventional fight scene shot from inside a limo. It looked great and stood out because the angle wasn’t something we are used to as viewers. 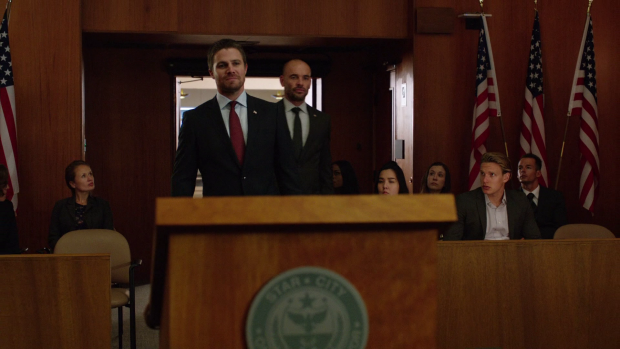 Oliver sticks up for the vigilantes

A solid episode that explores Diggle’s early days as Green Arrow and the problem he faces. Using Dinah and Rene as the main opposition works because they both have valid reasons to doubt his abilities as leader. Diggle’s arc is a fairly standard hero’s journey that results in him winning the approval of his team and apparently overcoming his personal demons though the twist ending makes this a lot more complicated. The episode was fairly light on Oliver though his pep talk to Diggle was excellent as it reversed the standard roles in their relationship and allowed Oliver to be the voice of experience. Oliver’s terrible parenting advice makes for amusing and interesting plotting though it remains to be seen if reconnecting with Felicity will become unbearable.

The episode had problems with Diggle’s story being a little too predictable and featuring a villain who really wasn’t all that interesting. She was an imposing enough presence and was involved in a really creative action sequence but very little about her was memorable outside of that.