Arrow introduces a mastermind villain for the season and focuses on Felicity being overwhelmed by her various responsibilities.

The title “Reversal” refers to the role reversal between Oliver and Felicity that defines this episode. Felicity is the one pulled in different directions by her commitments while Oliver is the one left to have dinner alone. It isn’t an exact reversal of the dynamic as Oliver and Felicity were often pulled away at the same time but seeing Felicity effectively take the lead is refreshing enough. 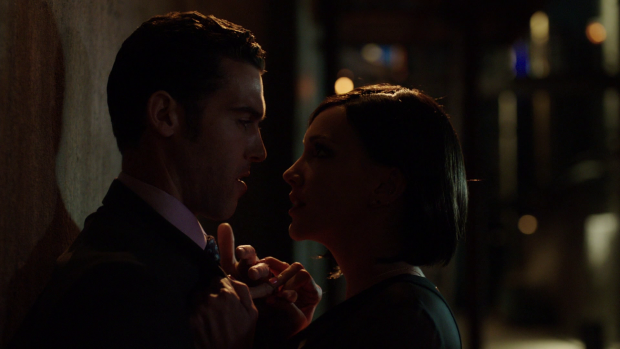 After one week off as the Green Arrow we start to see Oliver feel somewhat helpless that he is unable to get involved in the mission. He’s used to being at the centre of everything and now he’s the civilian waiting for the city to be safe enough to give his girlfriend time off to spend with him. It may not be a true role reversal but Oliver is definitely seeing the vigilante life from the other side and it isn’t something he’s comfortable with. Oliver has developed to the point that a single setback isn’t enough to get him to reconsider his decision; for now he’s content to appreciate that it won’t instantly fall into place and be patient.

I mentioned in my review of The Flash earlier this week that flawed heroes are more interesting and this episode provides another example of that when Oliver makes mistakes trying to adjust to not being in the midst of Team Arrow’s activities. His actions here specifically relate to Felicity but her story becomes connected to the wider Team Arrow story. When Felicity rushes off with Alena Oliver becomes worried and follows her with the intention of protecting her. He ends up ruining the plan which creates friction between them and has Oliver feeling really apologetic about the whole thing. This is a good example of a character acting impulsively motivated by their emotions and making a situation they don’t understand worse as a result. It works because Oliver is someone who tries to learn from his mistakes and wants to be a better person. I’m also impressed by the lack of angst to his relationship with Felicity in this episode. They have a problem, discuss it and move on so the writers are clearly treating them like adults.

The reversal pays off nicely with Oliver taking Felicity’s place as Overwatch while she is out in the field. He takes to it well but makes mistakes here and there that he treats as a learning curve. Gone is the man who would have agonised endlessly over the “what if?” scenario created by him giving Felicity the wrong directions. She survives, Oliver learns and the scene continues. 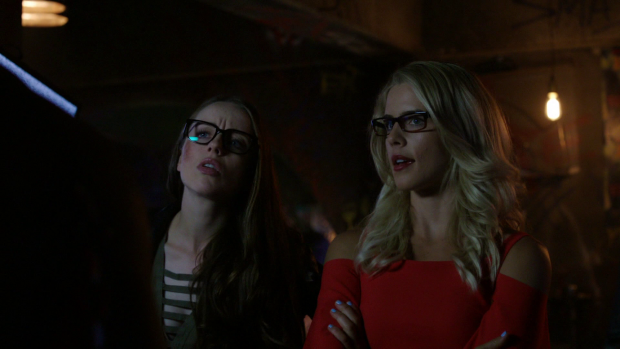 Hackers in the field

Felicity is handled really well in this episode. Her arc for this part of the season is around her figuring out her place in the world. Up until now she has dabbled in a few different things with Team Arrow being her consistent focus. This season has brought the realisation that she needs to sustain herself in a way that Team Arrow can’t. Her discussion with Curtis about where the team get their money is an example of what else she requires out of life. It was mentioned last season that she had a desire to use her intelligence to change the world which she does get out of Team Arrow to an extent but she also feels that she could be doing more.

This is where her startup company with Curtis comes in. It’s a project that she and Curtis can develop from the ground up without any influence from others so it’s something she can truly own and the fact that she has been unable to decide on a direction and name for the company suggests a reluctance to commit to it due to fear of it not working in the way she wants it to. Much of this is implied but it makes sense given Felicity’s behavior.

She is also struggling to juggle her commitments. Oliver is left during dinner, she forgets to post out important documents and her commitment to Team Arrow isn’t what it should be. Oliver, Diggle and Curtis all notice it while dealing with it in their own way. Oliver’s first instinct is to help her in any way he can even if his actions are misguided as noted above, Diggle tries the tough love approach by ordering her to go home, take a shower and get her mind right and Curtis leaves her to it trusting that she will figure it out in the end. 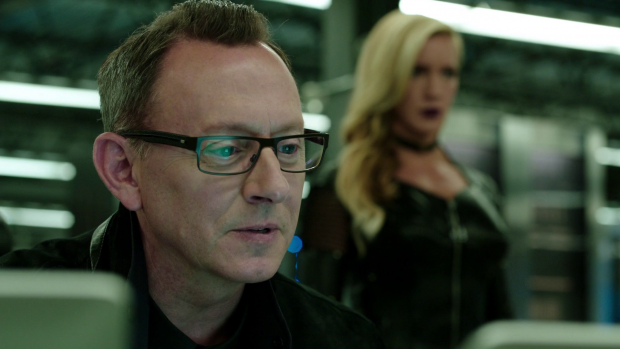 Cayden James prepares to bring down the internet

Alena’s arrival forces Felicity to consider the consequences of her actions; specifically her role in freeing renowned Cyber Terrorist Cayden James (Michael Emerson) from prison. This has come back to bite her as he is engaging in criminal activity that results in deaths. Felicity blames herself and is consumed by the feelings of guilt and regret; strangely more so than when she made a decision to nuke a smaller city to save a larger one. Self blame is something that Oliver is known for so he’s best placed to give her the pep talk that helps her deal with it. The episode acknowledges that he uses the same approach Felicity used to which brings a slightly comedic edge to it but the real aim is to show how far Oliver has come as a character. He admits that he didn’t manage juggling his double -or triple- life very well and needed to rely on others to help him cope with it. Oliver has learned the hard way through years of stubbornness that there’s no shame in relying on others as shown by him giving Diggle space to figure out how to run the team his way. Trusting others means that there’s less emotional baggage to shoulder on your own and that’s what Felicity doesn’t quite realise. She isn’t quite there yet but she definitely moves in that direction.

Cayden James was shown with a bag over his head last season leaving the casting decision until his next appearance. Michael Emerson is great in this role and the character is really well written. He’s very calm and deliberate in everything he does while showing no remorse as all the deaths caused by his plans are merely variables in his calculations. His distanced approach may have a lot to to do with only seeing his actions as part of a computer program that he is simply playing a part in executing Team Arrow stopping his plan turns out to be part of his plan as all he wanted was access to something that he needs later. In many ways this is a more effective way of doing what The Flash is trying to do with the Thinker; Cayden James is able to anticipate the actions of others and plan accordingly.

The late episode reveal slightly redeems his ludicrous plan to bring down the internet but doesn’t make it any less ridiculous. I can accept a lot on these shows but having the control station for the entire internet stored in a warehouse in Star City is a bit of a stretch even for this show. It also numbers among the problems that should be too big for Team Arrow to be dealing with so not all of the problems the show appear to be solvable. 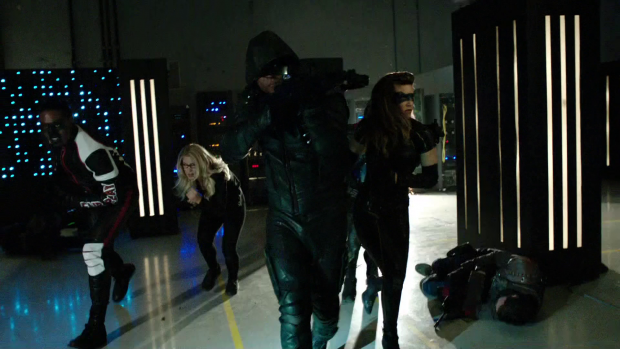 James uses Black Siren to do a lot of his grunt work. She is shown taking down the targets he has in this episode and having a lot of fun doing it. Katie Cassidy continues to be great in this role. She continues to play Evil Laurel with a sense of joy and pleasure in what she does, easily transitioning between femme fatale to straight up villain. It remains to be seen if relegating her to working for other villains is a good idea or not but for now she has plenty of agency and clearly seems to be getting something out of the arrangement.

The episode dials back on some of the other conflicts. Diggle’s injury isn’t even referenced which causes the tension between he and Dinah to disappear as a consequence. Samanda Watson isn’t around making life difficult for Oliver with her investigation and William is mentioned but not seen. None of that feels especially absent because it’s clear that things will be picked up in the future though Diggle does feel like something of a supporting character when there should be some focus on his growth as a team leader.

Conspicuously absent is Quentin despite the obvious potential in him having to deal with his daughter’s duplicate killing random people with no apparent remorse. Paul Blackthorne excels at just that kind of anguish so having his input into the situation would have been welcomed. 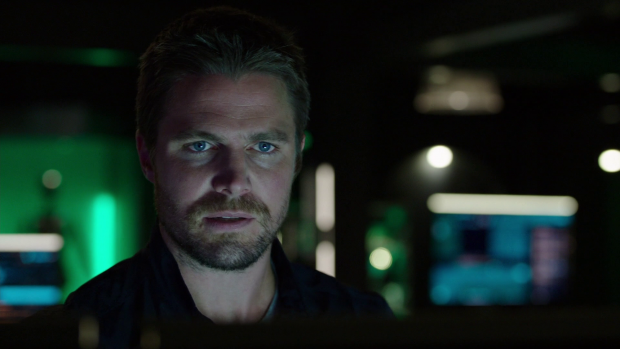 A compelling episode that focuses on Felicity struggling to juggle her priorities. The pseudo role reversal between her and Oliver works well and showcases how far Oliver has developed as a character as well as how much trust he puts in Diggle to handle the situation without him. Most striking is the fact that Oliver makes an assumption that ends up being a fairly costly mistake for Felicity but it’s something they quickly move on with. Felicity is handled really well and given plenty of agency to find a new direction for herself. Michael Emerson’s Cayden James is a really interesting villain so far and clearly a different sort of challenge for Team Arrow who appear to be playing right into his hands. Michael Emerson’s performance is excellent; making the character truly memorable. Katie Cassidy’s return as Black Siren is a delight as well.

The episode doesn’t focus on many of the other conflicts in any detail to the point that it feels like they aren’t there though it isn’t necessarily a flaw as they haven’t been forgotten. It drops the ball on giving Diggle more meaningful development considering there should be more of a focus on him learning how to be team leader and the lack of Quentin considering the abundance of Black Siren is very noticeable.