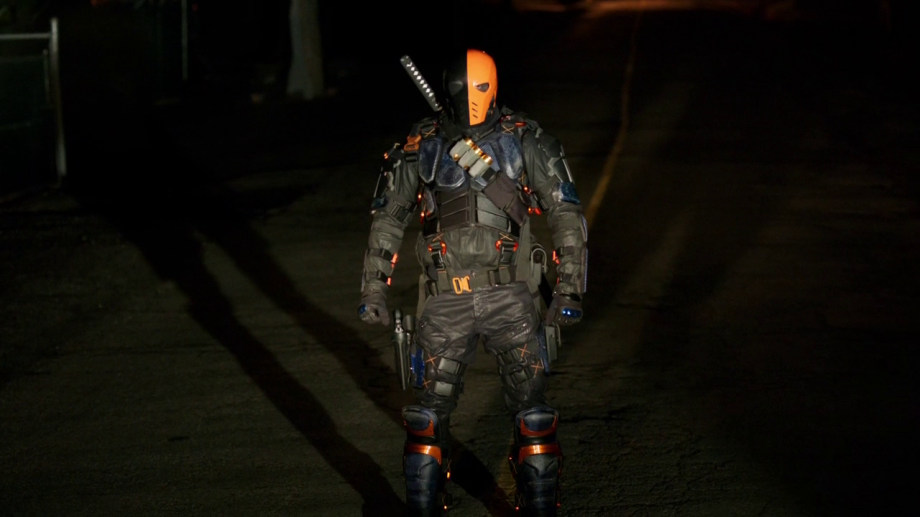 I split this off from my main TV column because I feel like it was a particularly noteworthy episode. Deathstroke AKA Slade Wilson is this season’s primary antagonist -in both timelines no less- and each week is proving himself to be a deviously intelligent and powerful villain.

This week he steps up his plans in a big way by kidnapping Thea which on the surface seems like well trodden villain territory but Slade’s methodology gives it a different angle. One thing that the episode does very well is show that Slade’s plan is very intricate – there are a number of seemingly unconnected actions that come together in a logical way.

Thea’s kidnapping is interesting because Slade doesn’t do so in his Deathstroke identity, he lets her see his face and confirms his connection to Brother Blood to her at the same time. The fact that he does this shows how invincible he feels as we find out in the episode that he plans to let Thea go and that this is only a small part of bigger events. I really liked how the reaction to the kidnapping was staged from the perspective of Oliver, you could really see how helpless he felt having no information to go on and having to appear like a normal man in front of the police – probably because they’ll question where he is if he’s not around during all of this.

Oliver is a very driven character but it often means he’s not really considering what might be going on around him. Isobel -finally back after so long away- reminds him that he has some important business related things to take care of in spite of the current crisis. Of course, Oliver is not interested -even before Thea’s kidnapping he was really struggling to care what was going on at his company. Isobel uses that emotional weakness and casually reminds him that he can temporarily appoint a new CEO so he immediately does. Naturally this plays right into Isobel’s hands and she uses the opportunity to seize control of the company from him, not so difficult considering the board are less than impressed with him. It also comes as no surprise that Isobel is working for/with Slade.

Slade’s ultimate endgame for the Thea kidnapping in freeing the prisoners made a lot of sense and was subtly alluded to at the beginning of the episode – when Diggle mentioned that prisons need more space ever since Oliver stopped killing them. It was pretty much a blink and you’ll miss it moment that became very significant later on. This gives Slade the soldiers for his eventual army of Mirakuru infused henchmen and the takeover of Queen Consolidated gives him the means to create that. Logistically the man’s more than covered.

My theory was that Isobel would turn out to be Talia Al Ghul but that seems less and less likely. Undeniably the similarities to the use of that character in The Dark Knight Rises are there. You have the beautiful, intelligent yet mysterious stranger that is active in the business world, she earns the heroes trust and then subsequently betrays him when she achieves her endgame -see the story is very similar. I’m wondering if she’ll turn out to be Deathstroke’s daughter Rose Wilson but I have my doubts there too – at this point I wouldn’t rule anything out. It’s hard being a comic fan watching these things when your mind so casually leaps to these theories about people.

This episode did a great job of showing how well Oliver’s team work together, the sequence where they were collectively chasing after what the thought was Slade with Felicity acting in an Oracle like capacity -see, comic book theories- was nicely done, granted they never managed to catch him but they certainly gel well together as a unit.

It isn’t all perfect on Team Arrow as the newest member of the team doesn’t agree with the orders that Oliver gives. Felicity, Sara and Diggle have worked with Oliver for quite some time and trust him which probably has a lot to do with the fact that Oliver sees them more as equals and values their input. Roy doesn’t get that same treatment, ever since he got his powers he has been treated like a loose cannon that needs to be kept on a short leash. The Mirakuru in his system heightens Roy’s aggression so he is becoming more and more intolerant of the situation. It certainly comes to a head in this episode when he attacks Diggle and walks out on the team in disgust, pointing out that Oliver has made some terrible decisions that has led them to the present situation. Roy does make some good points before storming out, Oliver’s short sightedness causes him to lose his company to Slade and make every wrong move possible to give Slade the complete upper hand in their Shakespearean struggle. Oliver admits as much in this very episode showing that he’s very much aware of his failings -even if it takes a while for him to realise. I get the feeling that Roy is going to become a problem for Team Arrow before too much time has passed.

There was a particularly great scene where Slade is arrested and Oliver confronts him in the police station. Smartly he doesn’t ask where Thea is because he knows that Slade is not at all intimidated and will never tell him where she is so instead he asks how Slade got off the island. It is at this point we’re told how versatile Mirakuru apparently is since Slade was able to swim all the way to civilisation and survive it mostly intact. We still don’t know what costs Slade his eye but I can only assume that Oliver puts an arrow through it given the imagery of Slade’s Deathstroke mask with an impaled eye socket on the beach of the island as well as Slade promising to put an arrow through Oliver’s eye. The scene itself was dripping with tension, Slade’s voice and manner was dripping with barely concealed contempt and his constantly calm tone was very sinister. On the flip side of that Oliver’s anger shines through completely which again gives Slade the other hand since he is patient and deliberate in his actions causing Oliver to react emotionally and make mistakes. It really is great how expertly Slade is maneuvering. His insanity is nicely complimented by Slade being haunted by a hallucination of Shado on the island that influences his actions. I wonder if this hallucination will manifest in the present.

I also liked how Slade admits freely that the island has a hold on him since it shows that he’s not ashamed of the fact that he’s been driven completely insane over the years. It must be more terrifying for Oliver to see that the revenge plan is playing out so intelligently. This is a war and Slade is winning it, that much is clear from that scene.

Other interesting moments in the episode included Quentin Lance being arrested for collaborating with “The Arrow”. It’s been a long time coming this as we’ve seen his superiors becoming increasingly agitated with this collaboration over the season, I’m also impressed that we’re on the 18th episode and he hasn’t been restored to his former position yet. Where Quentin’s arrest will go from a story perspective I’m not sure yet, could either be let off with it somehow or gain his freedom at the expense of his job. Many other things could happen too.

We were given two big reveals as well. Thea was told by Slade who her real father is which has causes her to completely lose faith in her family and Laurel was told by Slade Oliver’s secret identity. I loved that moment as Katie Cassidy convincingly portrayed Laurel as connecting the dots in her head and having everything suddenly make sense. What she will do with that information is anyone’s guess, her feelings on Green Arrow have been complicated this season so I’m unsure if she’ll honour the secret or threaten to expose it. It definitely puts her in an interesting position.

It’s also worth noting that Slade’s monologue about what he was going to do to Oliver is definitely coming true. He’s taken his company, his family and working on tearing apart his team. Not too long before the promised arrow through the eye is attempted.

In case it was unclear above, I loved this episode. I thought it was tightly scripted, well shot, well acted and smartly written. There was a lot of content but the episode didn’t suffer for it, I never felt that it was getting bogged down in minutiae or that anyone was acting out of character to service the plot -looking at you Marvel’s Agents of S.H.I.E.L.D-. The importance of the episode can’t be understated either, it moves along the villain’s plan and changes up the status quo for the characters considerably. The effects of this episode will have ramifications that will likely extend well into next season, if not beyond. Sufficed to say, having to wait an additional week has been pretty torturous and I’m eagerly anticipating episode 19.