“Spectre of the Gun”

Arrow approaches the issue of Gun Control when a man shoots up City Hall causing people to feel uncertain about how safe they really are in Star City.

Approaching hot button issues on TV shows can be a really problematic thing. It often comes across as underdeveloped and/or preachy. Tackling these things on popular TV shows is a good idea because it speaks to the viewer on something they already have an opinion on but the execution often leaves a lot to be desired. Arrow is the right kind of show to deal with Gun Control because of its more grounded street level approach. Villains in this show routinely use guns and Team Arrow have constantly struggled with their approach to killing so it is something that matches with the setup of this particular show. 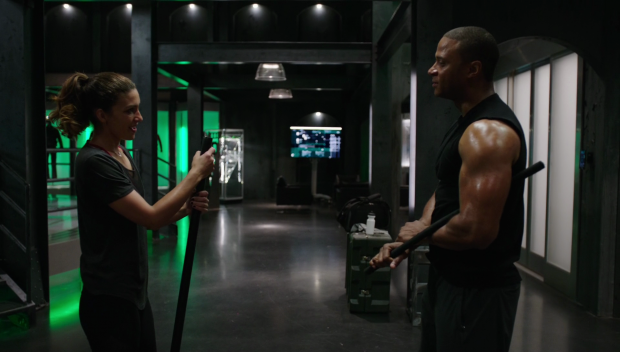 Diggle puts Dinah through her paces

I couldn’t help wondering why this hasn’t come up sooner. Star -formerly Starling- City has always been a dangerous place to live hence the apparent need for vigilantes to work outside the law to clean it up. People getting twitchy after a single attack on City Hall shouldn’t really cause this much upset as it’s just another symptom of a much larger problem. One of the threads last season was that people were leaving the city in their droves because they didn’t feel it was safe to live there any more. After three sieges, a near miss nuke attack and all the other violent crimes that have taken place over the years this really shouldn’t be the incident to trigger the issue.

Despite that I think the issue was handled really well. Every character has a position on the issue and does a good enough job of articulating it. There is an engaging argument between Rene and Curtis who both have really passionate opinions on the whole thing. Rene thinks guns save lives and help people protect themselves where Curtis holds the opinion that it encourages unnecessary violence. Both sides of the argument are problematic because they do come from a deeply personal place. For Curtis it’s fear and he directly references that he is three times more likely to be a victim simply because he’s black. Quentin is able to validate that figure which holds weight given his police experience. Dinah also sees the merits in guns but the episode doesn’t spend much time on her point of view.

It’s a big issue to tackle and I would say that Arrow does a competent job of approaching it considering it’s the first time something like this has been tackled. Dividing the team’s views on it is definitely the way to go and having Oliver be the one trying to find the middle ground. His role as Mayor is key here as he has to reach a position on it. There was a missed opportunity to start Oliver down a liberal path that is commonly associated with his comic book counterpart but his approach to killing has always been an internal battle for him so having him consider the issue from a political point of view is something we haven’t really seen before and starts tapping into the potential of the Mayor Oliver Queen setup. Stephen Amell delivers a really engaging performance as a calm and measured Oliver Queen who has decisions to make as well as a commitment to consider them carefully. The result of that was hardly Earth shattering but it was interesting to see Oliver as a political figure with minimal time as the Green Arrow. This definitely opens the door for similar stories in future episodes. Having him resolve the conflict as Oliver Queen by talking down the shooter was a refreshing touch as well. The shooter wasn’t at all developed but as moments go it worked because we get to see how Oliver can inspire people out of costume which is rare. 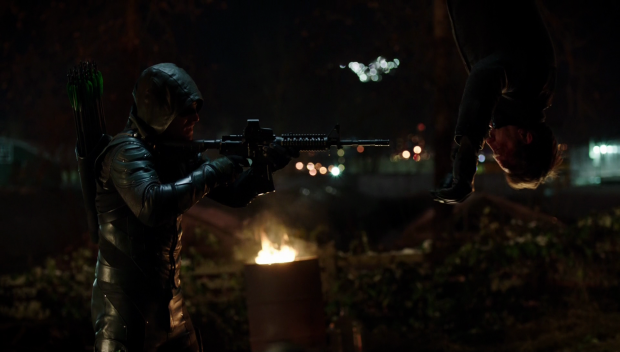 Oliver switches up his arsenal

I was pleasantly surprised by Felicity’s views on the issues in that she doesn’t really have any. She dismisses the entire debate because having the debate apparently won’t accomplish anything. Curtis is right to challenge her on that because not having conversations definitely doesn’t accomplish anything. Nothing ever changes if people just bury their head in the sand and do nothing about it. This is almost certainly a commentary on the reactions people have to the recent Presidential Election albeit a veiled one. It’s interesting to have this argument come from Felicity given her attitude to having things change in the past. It could be that her descent into morally ambiguous hacker has her more concerned with what she can definitely change rather than what she can’t. I’m already pretty sick of ominous close-ups of the flash drive containing ill gotten secrets.

Rene is the star of the flashbacks in an attempt to create a personal connection to the Gun Control issue. We see him arguing the case for having a weapon where his wife disagrees and he is sort of proven right when she ends up dead because of a gun. I found this to be really clumsy for a number of reasons. Firstly there was no significant insight into Rene other than revealing that he had a wife and has a daughter who he doesn’t see any more. This is fine because there hasn’t been much in the way of development of his character because he has been established as a private person who doesn’t like to talk about himself. This effectively gives us information about him without expositional scenes between the characters which is always a good thing. The problem with it is that this insight doesn’t really tell us anything about him other than the cold facts of the situation.

It also doesn’t make a good case for gun ownership because Rene using the gun on the armed intruder was what caused his wife to be killed by a misfire when he hit the ground. If anything this should motivate Rene to be against gun ownership because accidents like that can easily happen. I’m not really sure what point the writers were trying to make with this because it suggests the opposite of what Rene stands for. 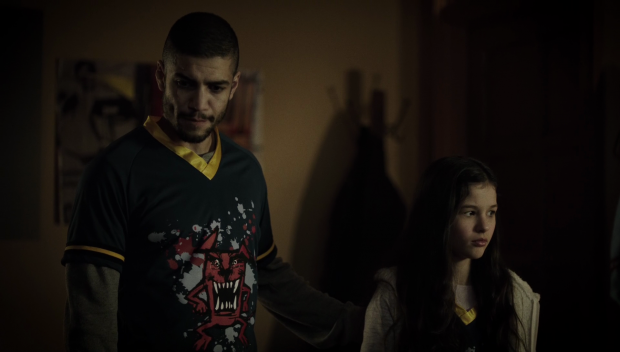 Diggle and Dinah have a really interesting dynamic in this episode. Putting the first recruit to Oliver’s cause with the newest recruit is pretty logical and puts Diggle in the role of team trainer in some ways. Dinah is struggling with the prospect of returning to a normal life which means things like finding a job and a place to live so her arc becomes getting used to that idea. It resolves fairly quickly when she joins the police force and finds a nice apartment but there’s more to their interactions than that. Diggle is able to understand her point of view and speak from experience about how important normality is when they do what they do. Dinah has spent so long consumed by revenge that it’s a really difficult transition but Diggle’s empathetic nature lets her make an important first step. Dinah still feels like part of the background but at least she’s finding a solid role within the team much quicker than most have.

Thea is back and she has definitely been missed. She wastes no time in telling Oliver how much she disapproves of his relationship with Susan and reminds him how much of a snake she has been in the past. Oliver is blinded by her for some reason and tries to convince Thea that she’s a good person but Thea is having none of it. I’m surprised that Oliver is so trusting in this relationship because that’s pretty inconsistent for his character and his failure to acknowledge that Thea is so often right in her instincts also feels like something of a gap. The relationship hasn’t been developed strongly enough for Oliver to be clearly blinded by his feelings for her so there’s definitely a disconnect here.

This episode was light on costumed action which was definitely the right choice when trying to enhance Oliver’s role as Mayor. I would have almost preferred the episode to leave it out entirely because those scenes were very problematic. The first sighting of Vigilante since the crossover did absolutely nothing for me other than attempt to misdirect from his identity potentially being Adrian Chase. Showing Chase injured before seeing Vigilante in a later scene was a transparent attempt to shift suspicion away from him that didn’t work for me. It might have worked on Oliver though. 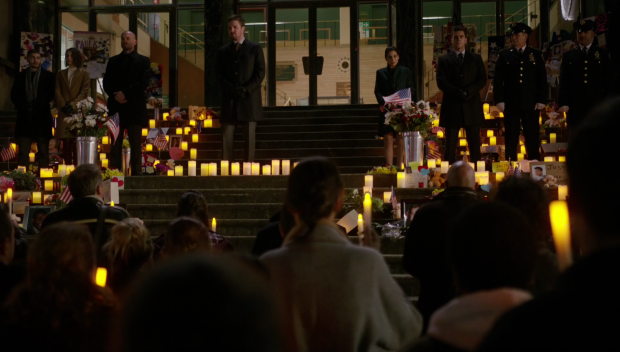 Oliver pays tribute to those lost

A competent if problematic attempt to explore a really topical issue in the context of vigilante justice. Dividing the team’s opinions on the issue and having Oliver navigate the middle was a good idea with an engaging enough debate between Curtis and Rene with Quentin and Dinah weighing in with their views. Oliver is noticeably different as he takes a more calm and measured approach than we normally see and uses his role as a politician to attempt to find a better way. It might be the start of Oliver matching the liberal views that his comic book counterpart is known for even if the solution was really underwhelming. Having Mayor Oliver Queen be the persona to talk the shooter down was a nice touch as it shows he can inspire people as Mayor. Rene being the star of the flashbacks gave little insight into him as a character other than cold facts about his life before the team and actually made a case against gun ownership which is baffling considering his position on it.

Felicity taking the position of wanting to ignore a pointless debate is an interesting one as she is a character who has historically been quite change focused. Curtis was right to call her out on it and it seems to reference the recent Presidential Election albeit in a roundabout way. It does seem that Felicity is fohttp://kneelbeforeblog.co.uk/wp-admin/post.php?post=1506257&action=editcusing on what she can change but the constant ominous close-ups of the flash drive full of ill gotten information are already tiresome. Diggle and Dinah already have an engaging enough dynamic that allows her to take an important first step towards reclaiming some sense of normality in her life. She is already finding a solid role within the team that still needs to build. Thea’s return is a welcome one and the way she calls Oliver out on his relationship with Susan and his lack of caution around it is great to see. Action was light in this episode and fairly clumsily handled for the most part. It could have been left out entirely and not impacted things too much.