Arrow deals with Oliver being short-handed when he looks to recruit a new team to help him protect Star City.

Part of Oliver’s arc last week was around him accepting that the old team was gone and he would need to find a new one if he was going to more efficiently protect people. Of course with Oliver Queen being the sort of man he is there was no way it would be as simple as recruiting a new team and having that instantly solve the problem. There have to be challenges and in true Arrow tradition those stem from his own stubbornness and unrealistic expectations. 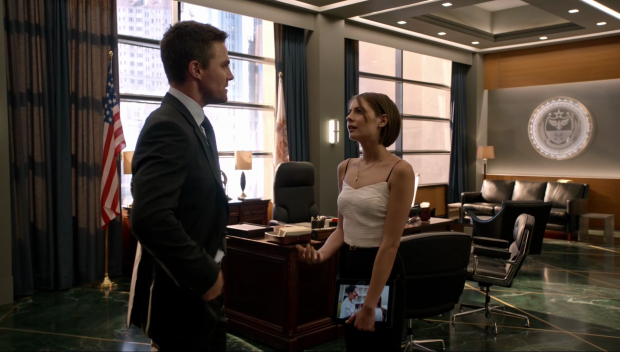 Thea settles into her new role

There’s no denying that Oliver holds the previous team to an impossibly high standard. Thea gained a lot of skill from working with Malcolm Merlyn, Diggle was ex-military, Sara was a highly trained assassin and Roy had his own wonderful set of parkour skills before he joined. The weak link in all of this was Laurel who had the least training and suffered a lot because of that in the early days.

This episode address Laurel’s inexperience when Oliver suggests that it was the thing that got her killed in the end. Fair or not, that’s what Oliver thinks and he is using that example to make sure that the same thing never happens again. As such he is emotionally and physically abusive to the new team in order to whip them into shape. 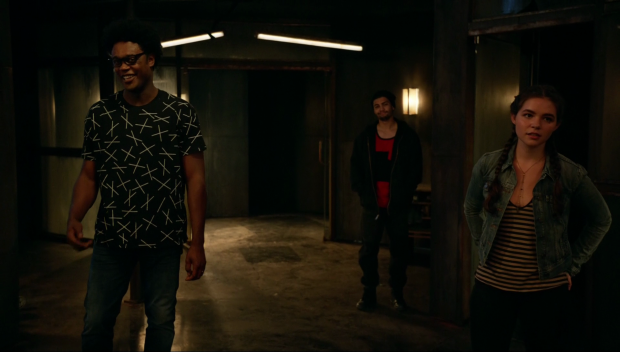 The flashbacks show just how far off the mark Oliver is when training the new team. He uses the exact same technique that the Russian Bratva used as his induction. The point of the test is that people need to work together in order to ring the bell and pass. Oliver realises this but this means that he is the only one who survives because –according to the Bratva- you can only count on yourself. Their lessons were around using others to achieve your own goals and discarding them afterwards where Oliver needs to teach his team a different lesson so it’s very interesting to see the payoff of his induction to the Russian Bratva proving that his technique was flawed. Oliver needs to promote cooperation not obedience and that is what will make his team an effective one.

Felicity takes on the role of the figure that can pull Oliver back when he goes too far. His own guilt over Laurel’s death fuels his brutal training regime and unrealistic expectations which is definitely not the right way to go. As with last week, he have to simply accept that Laurel was essentially the moral centre of Team Arrow whether it was actually shown or not otherwise none of this will ever work. She could well have been but we never really saw it. This episode tends to focus on her weaknesses as inspiration for the new team but there is an element of following her example in there too. Felicity points out that the team doesn’t work because they don’t trust him. They are naturally resistant to his leadership because they have no idea who they are fighting for and what values they have to uphold. 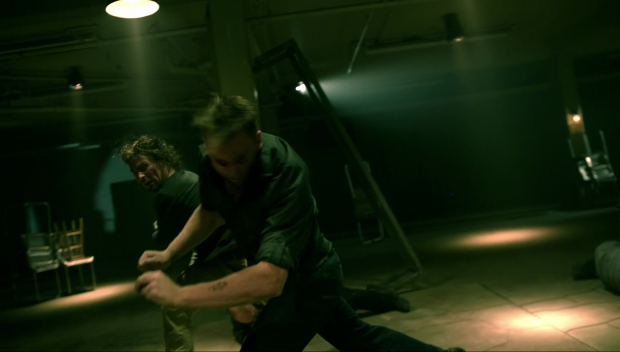 The Russians put Oliver through his paces

As such the team feels underdeveloped but that’s entirely the point. All of the recruits have been seen before – Rene Ramirez aka Wild Dog was only introduced last week but there is some background there- so immediately we know that they are part of the city and have their own reasons for wanting to help protect it. Curtis seems to be the weak link in all of this as there is a suggesting that he isn’t taking this as seriously as he should. Maybe that’s a point of development for him personally but this episode isn’t about that as it is more concerned with Oliver finding a better way to be a leader and Felicity exists to help him realise that.

It’s a far better role for her than making her the love interest for any given fledgling superhero or shouldering the relationship angst. It reminds me of when Arrow was in its prime where Felicity was a character not afraid to challenge Oliver when he needed it while still being supportive in his mission. She is one of the few people who can make him take a step back and reconsider things which is exactly what happens here. 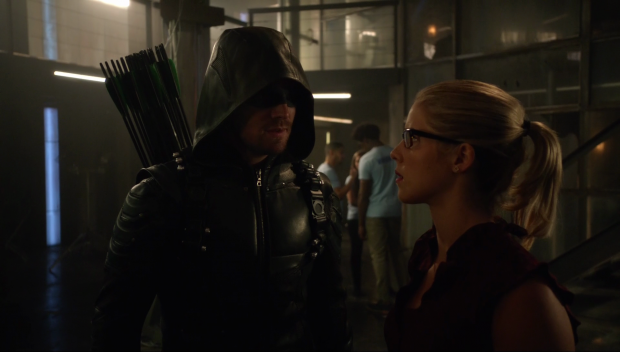 Part of that realisation comes from the villain of the week. Rory Ragan aka Ragman (Joe Dinicol) initially seems like a throwaway villain who encourages the team to come together to take on a common enemy but I was surprised that the episode took this in another direction. Ragman is actually a physical representation of the consequences of the nuclear annihilation of Havenrock back in “Monument Point”. I spoke at length about how Arrow seemed to ignore Felicity’s role in that. I’m not saying it was her fault as it was an impossible choice but the consequences should be far reaching and it seems that the show is starting to acknowledge that.

Ragman being the only survivor of Havenrock is a good idea as it gives him a solid motivation to not see that happen again. At first he is fuelled by revenge to honour his father by going after those who made the nuke. In some ways it mirrors Oliver’s story from season 1 and this is used as a way for Oliver to get through to him. He relates his own experiences of his father inspiring him to act as a tool for vengeance to write the wrongs that he caused Realising these similarities goes a long way towards Oliver accepting that he has to change his tactics when dealing with the new team. Revealing his identity to them is the first step in that but it won’t be a simple change I don’t think. 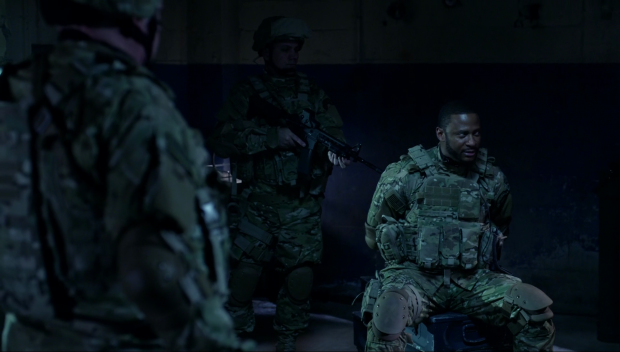 Diggle is in a spot of bother

With such a strong motivation that ties into the consequences of an event in the previous season Ragman could end up being a really interesting character. It’s too early to tell what the other members will bring to the show but it looks like Wild Dog will be the loose cannon who occasionally gets results. In this episode his reckless behaviour saves a little girl and gives them solid evidence to help them investigate Ragman. I could see him having a few more successes through little more than dumb luck but generally being a liability for a while. We shall see how this develops.

Thea may be out of the superhero game but she is no less relevant to this show. Her role has shifted to support Oliver in his civilian life and so far it seems to suit her. Having her assist him in his duties as Mayor will inevitably bring her into the Green Arrow side of his life but she won’t necessarily need to get into costume to be a vital part of the show.

Her scenes with Quentin this week were really effective in furthering his character as well. Paul Blackthorne completely nails playing Quentin struggling with his personal demons. He needs a reason to not drink and hasn’t found it yet despite the moment of clarity that Oliver helped him get last week and Thea gives him that chance. 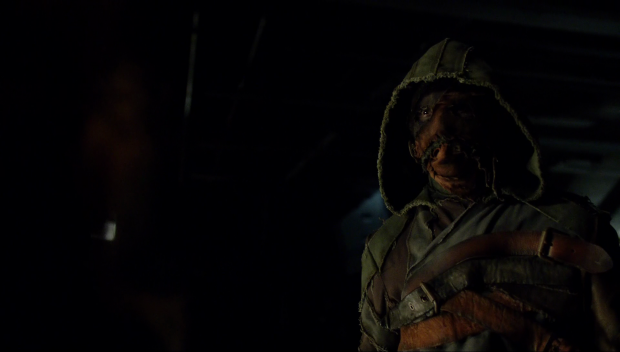 The other new recruit

I like that the show avoids the trope of the father/daughter bond that it could so easily have gone with and frames Thea and Quentin as friends instead. They understand the emotional troubles that comes with the life they used to lead and Thea understands the need for a change of pace so offers to let him be Deputy Mayor. It could be a good role for him and it gives him something different to do that could definitely provide some great material. I’ve always liked Quentin and I’m interested to see what direction being Deputy Mayor takes him in.

Diggle has more to do last week and it also ties into the plot from last season. We see a more paranoid military who are aware of the existence of magic and metahumans. Naturally there would be a desire to create or secure weapons that can rival those potential threats and the episode deals with that in a really interesting way. Military corruption is a fairly played out trope but it makes a lot of sense here and having Diggle be the opposition to that is the perfect use of him being back in the military.

Having Diggle be framed for something he didn’t do gives a valid story reason for reuniting with Team Arrow as he will need help clearing his name and seeing a young soldier killed right in front of him allows for plenty of guilt. It was obvious that the wet behind the ears soldier wasn’t going to survive the episode but David Ramsay plays the guilt with his usual sincerity. Despite that, the corrupt military and death of an innocent feels a little too cliché. It may go somewhere interesting but these sorts of things usually don’t. 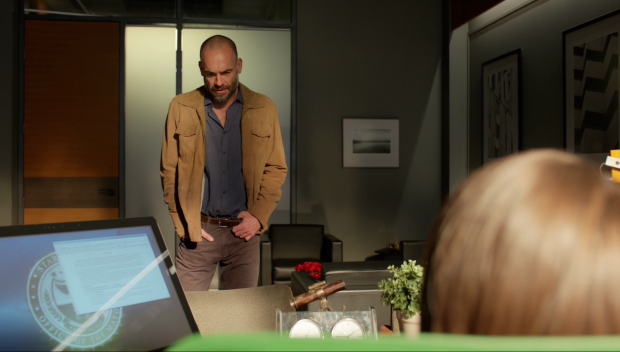 Quentin is having a tough time

It is confirmed that the mysterious archer is named Prometheus and he doesn’t want anyone but him killing the Green Arrow. It sounds like it’s personal but I wonder why that is.

A slick an entertaining episode that explores the difficulties in Oliver recruiting a new team really well. Oliver’s own shortcomings are the biggest barrier to overcome which makes the team dynamic an interesting one. I like how the show took a throwaway villain and made him a last minute recruit to the team while drawing on the consequences of the nuclear attack on Havenrock last season.

Thea and Quentin’s changed roles in the show suit them well and Felicity works so much better as someone who can challenge Oliver when he needs to be put in his place. The episode also does a good job of starting the process of Diggle’s return to the team despite the tired corrupt military tropes and murder of an innocent soldier. Even the flashbacks are relevant and interesting so I’m feeling really good about Arrow right now.