Arrow deals with some lingering issues as Oliver’s accidental murder of Billy Malone comes back to haunt hiim while Susan’s research starts to become a problem.

Susan has been looking into Oliver for quite some time and has gathered some fairly damning evidence of Oliver’s exploits. It is well known that he was on an island for 5 years but his excursions to Hong Kong and Russia aren’t known about to the general public. If his trip to Russia and his affiliation with the Bratva become known then that will deal a severe blow to his credibility as Mayor and might have him brought up on criminal charges. That isn’t even taking into account Oliver’s secret identity as the Green Arrow which would definitely create problems for him. 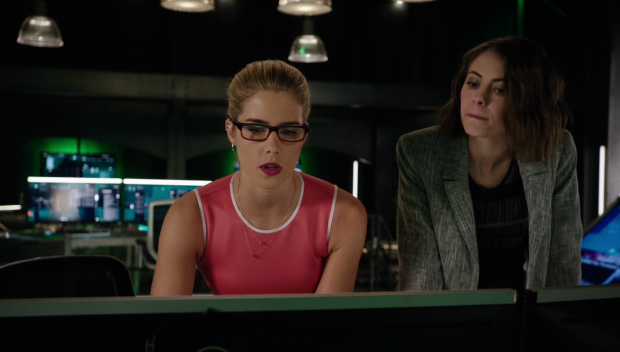 I had previously suspected that Susan’s relationship with Oliver was a way for her to get information but this episode suggests that her feelings for him are genuine. She directly asks him if he’s the Green Arrow and he plays the whole thing off as a joke which doesn’t work as well as he wanted it to. Oliver failed to notice the tone of Susan’s question or how distressed she was so didn’t pick up on how serious the question was. It’s not clear what Susan was planning to do if he was honest or even what she expected to get out of the question but there’s clearly a bit of a disconnect in their relationship. Oliver also seems content to continue lying to her which definitely wouldn’t form the grounds for a serious relationship.

It’s almost darkly funny that Oliver assumes he can handle Susan asking about him being Green Arrow because he has experience in hiding his identity. He has been routinely terrible at hiding it and Susan is a really intelligent journalist who has some really strong evidence supporting her belief. Granted Oliver didn’t know that at the time but his dismissive nature on the whole thing was puzzling.

Thankfully the episode recognises that Oliver has misjudged the situation and brings the other characters in to help deal with it. Felicity’s descent into being a morally grey hacker ties nicely into this as Susan’s information is stored digitally so she is able to view that with ease. Deleting it won’t accomplish anything because it is bound to be stored elsewhere so there’s no way to make this go away. Thea contributes to this by engineering a way to completely discredit Susan which leaves her reputation in the toilet in order to protect Oliver’s secret.

Oliver thinks that this is overkill and calls Thea out on it. As far as Oliver is concerned Thea crossed the line and his secrets aren’t worth someone losing their livelihood. The scene between Susan and Oliver where she connects the dots between her asking the question and her credibility being destroyed is really well played by Stephen Amell and Carly Pope. There’s a cood contrast between sincerity and mistrust in the performances and Carly Pope really made me feel for Susan’s situation. It’d be a shame if this is the last we see of her as there could be some follow up to this. The episode does lack a finality to their relationship and I think Oliver would try to make amends in some way. 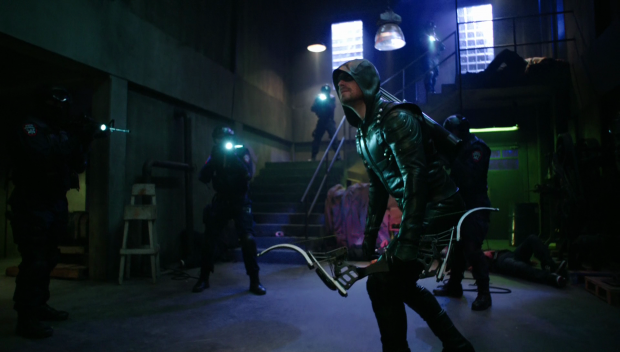 On the wrong side of the law again

Thea’s decision is a morally grey one and draws a comparison to one of her parents. I expected her actions to be compared to Malcolm because he would always do what he felt is necessary but Oliver compares her to Moira. Sometimes it can be easy to forget Moira because she has been away from the show so long but she made a lot of morally questionable choices over the years when it came to her role in the Undertaking or the way she dealt with Oliver’s illegitimate child. She always had her reasons and stood by every decision she made but they weren’t the best choices. Thea has done exactly the same thing here and if she transitions into being more like Moira in the future then that will be a really interesting direction for her to go. She’s confident, assertive, no afraid to take action when she wants a certain result and has a very defined view of what she feels is acceptable.

The action she took against Susan was justifiable as far as she is concerned and that’s something that concerns Oliver. At first he’s angry with her but that quickly transitions to concern as he doesn’t want her going down the same path that Moira did. I’m glad that a comparison wasn’t made to Malcolm because the show spent two seasons proving that she was nothing like him and all of the darkness that could be associated with her character was external. Her behaviour in this episode shows that there is a different sort of darkness beneath the surface that is starting to appear. I’m interested to see where this takes her and what other decisions she might make in the name of protecting those she cares about.

It took a while but Oliver’s accidental murder of Billy is finally coming back to haunt him. The police are turned onto the Green Arrow as a suspect when an autopsy report shows that the arrow wounds were consistent with those used by the Green Arrow. This creates enough evidence for a warrant to be issued for his arrest and now Oliver has to deal with being on the wrong side of the law again. There isn’t much to this really but it does remind us that Prometheus is still out there which is necessary considering he has been really quiet the last few weeks. It’s consistent with is plan to hit Oliver where he lives but also doesn’t seem all that inventive as plans go.

The loss of momentum in the Prometheus story is starting to become a problem. It feels like a long time since we’ve had any development of it so the urgency has fallen away somewhat. This episode does attempt to pick this up by having Oliver visit the mother of the man they suspect might be Prometheus but all that establishes is that she hasn’t heard from him in years. It’s not really enough to get excited about so I hope this plot picks up in a big way sooner rather than later. 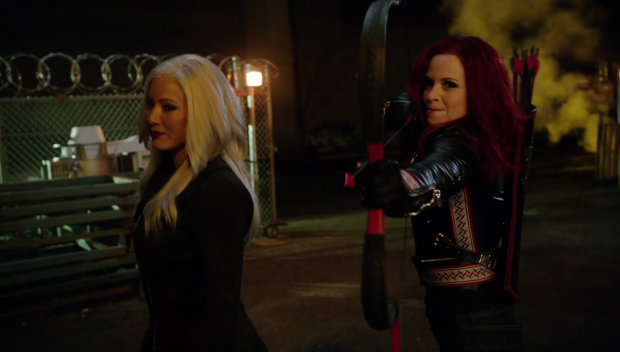 Following up on Billy’s murder did lead to Oliver using his position as Mayor to benefit him as the Green Arrow. The meeting he has with Captain Pike where Quentin and Adrian back him up was a good example of how his political pull can create opportunities for him. Interestingly it isn’t until Oliver is honest with Pike about what really happened that he starts to listen. Oliver’s appeal to his better nature is a genuine one because he is able to sincerely point out that it was a setup by Prometheus and the Green Arrow will have to live with that. It’s enough to solve the problem but Oliver foolishly repeats those words as the Green Arrow which no doubt tips Pike off on the secret identity. This feels like a bit of a manufactured problem to prolong the villain conflict and little else but the Mayor angle was something that worked as well as allowing Oliver to answer for his crime in a really sincere way. It does seem like it is going to feed into much larger problems as well.

I found the villains to be somewhat underwhelming this week. The returning China White, Cupid and Liza Warner aren’t exactly going to go down as the most memorable antagonists the show has had but they did the job of distracting the team for the purposes of this episode. Quentin’s connection with Liza Warner as a former cop is about all we get in terms of depth for the villains and I did like the idea that she felt betrayed by Quentin for allying himself with Darhk. There was little else to it but it did allow Quentin’s redemptive arc to take a different direction than the alcoholism which makes his struggle feel more impactful. It also creates a link between Oliver and Quentin who both accept responsibility for things that aren’t their fault. Oliver blames himself for Billy’s death and Quentin blames himself for the way Liza turned out but neither of them are the cause.

The flashbacks have lost some momentum as well. All this episode showed us was a hospital escape and a warehouse shoot-out with a pointless cliffhanger hinting that Anatoly might die which of course we won’t because we’ve seen him in the present day. There’s a lot of story that needs to add up in the flashbacks before the season ends with Talia and Konstantin Kovar as well as the overall Bratva narrative so more filler like this can’t really happen. 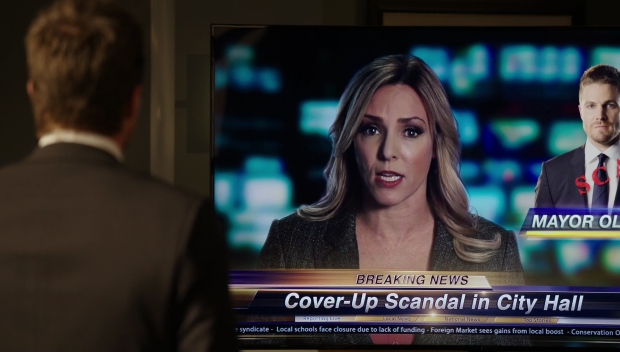 A solid episode that creates interesting conflicts for the characters. Thea’s idea to ruin Susan’s life in order to protect Oliver’s secret is a really dark turn for her and drawing a comparison to Moira with the choices she made was a really nice touch as the expectation would have been comparing her and Malcolm. Oliver’s transition from anger to concern feels natural and Thea could be taken in interesting directions over the coming episodes. The Susan angle was interesting as well as there is a hint that she is conflicted about using the information against Oliver.

Bringing back the accidental murder plot to put Green Arrow on the wrong side of the law is fairly simple but it’s an effective way for Oliver to answer for his crime as well as use his position as Mayor to benefit him as Green Arrow. The villains were fairly underwhelming this week with only one of them expanding Quentin’s arc in compelling ways. I also found the flashback story for this week to be filler complete with a pointless cliffhanger.