Arrow closes out the prison arc with the long awaited Oliver/Diaz showdown amidst an all out prison riot.

Seven full episodes of Oliver Queen in prison was far more than I expected from this season. Of course a long plot doesn’t necessarily mean a good one but the writers have made good use of this situation to provide fascinating morally complex character driven stories. I’ve repeatedly said that separating the main character from the rest of the cast is risky but the sense of isolation has worked wonders in building the atmosphere around Oliver Queen. 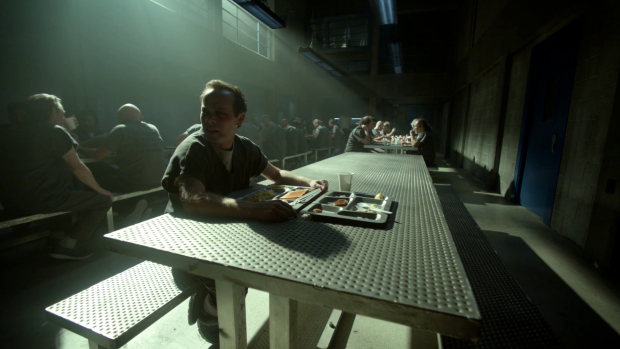 Oliver gives Stanley what he deserves

Such a long form story deserves an epic conclusion and this episode certainly qualifies. Framing the entire episode as the final showdown between Oliver and Diaz with Slabside Prison as the arena felt appropriately poetic. Oliver taking on the man more or less responsible for him being in prison in the prison itself just feels right as conclusions go.

It’s also one last challenge for Oliver Queen the prisoner before he rejoins the outside world. Last week saw him make a huge mistake in believing Stanley and getting Ben thrown into solitary confinement. Stanley continues to gloat after the fact while pretending to be ignorant of the situation. This ignorance is shown in a new light because it has been made clear what Stanley is capable of. Oliver struggles to maintain his calm around Stanley after realising he was manipulated but is able to clearly articulate that they aren’t friends and Oliver won’t be doing anything to arrange his freedom once he leaves. He is clearly angry with himself for playing into Stanley’s hands as well as being angry with Stanley for abusing his trust like that.

Having Stanley attack him by drugging him later in the episode revealing just how unhinged he is was an effective payoff to this. I always got the impression that Stanley was a very timid individual with perhaps a sadistic streak that he keeps hidden. His attack on Oliver shows him to be completely unhinged. It’s almost like he’s looking for some form of acceptance from someone which leads Oliver to try exploiting that by tricking him to believe that he could be Oliver’s sidekick. Of course it’s just to buy time for Oliver to come to his senses but it does seem to be what Stanley wants. I’m not sure he has the chops to be a significant future threat but killing Brick and escaping is surprising enough for him to be at least a short term threat somewhere down the line. 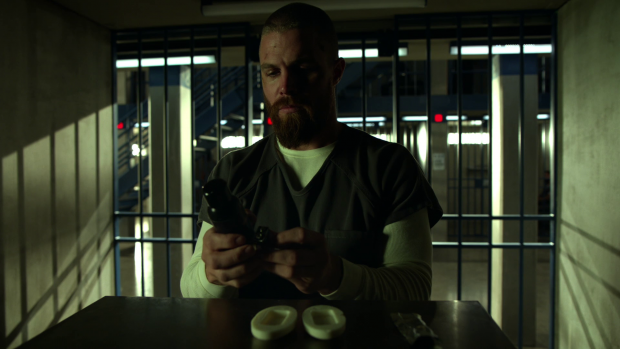 Oliver’s early interaction with Stanley sets up him making it right by telling Ben that he knows the truth. It seems like small comfort at the time but sets up an excellent partnership between the two of them. When Diaz begins his plan Oliver and Ben have each other’s back and work together brilliantly throughout the episode. Another great thing about the prison plot is allowing Ben to become a much more compelling character with a strong set of values that work well in this show.

The nature of their team-up in this episode was complex. Ben doesn’t want to side with Oliver because of what happened last week. He says that he only saved Oliver to increase his chances of being offered some sort of deal that secures his freedom but Oliver appeals to his better nature by emphasising the fact that Diaz has no qualms over killing hostages and challenging him to prove that he’s a better person. It clearly resonates with Ben who becomes a willing partner for Oliver. This is a very quick, economic and effective way to bring these characters together in a way that benefits both of them while developing Ben as a character. He is shown to have a strong ethical code that he lives by which gives him so much potential to return as an A.R.G.U.S. agent of some sort or a member of Team Arrow should that become a thing again.

Ben and Oliver working together creates an opportunity for some great action. The absolute highlight was the single take sequence following Oliver and Ben as they fought inmates on multiple levels. It’s large scale, well choreographed and technically impressive in almost every way while making great use of the hand to hand skills of the two characters. This really cements them as an effective team and makes it believable that they could take on so many people armed with almost nothing. 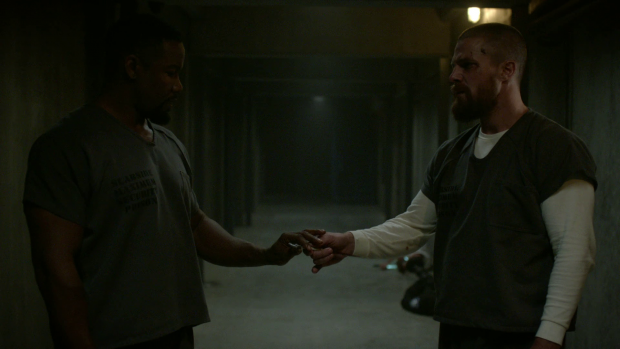 There were other great action beats such as Oliver beating inmates with a soda can inside of a pillowcase. It’s another display of Oliver’s skill and creativity while also being really awesome in its own right. Ben using half of a pair of scissors in place of his bespoke blades is also great as it shows him playing to his strengths while making do with whatever he can find in the moment.

Some of the action wasn’t quite as strong. Oliver’s escape from his cell was weirdly edited with camera movement that was uncomfortably rapid. The fight with Brick and Sampson was also a victim of clumsy editing to the point that it was difficult to make out what was going on. There were too many cuts making the action incomprehensible which ruined what would have have likely been a really intense fight sequence.

Oliver’s final confrontation with Diaz worked really well. It has been previously established that Diaz now has super strength so it makes sense that Oliver wouldn’t be a physical match for him. When they finally come together it amounts to Diaz brutally beating him until his overconfidence allows him to drop his guard to give Oliver the chance to gain the upper hand. Oliver shows his greater tactical ability here as he would realise that he’s no match for Diaz so simply has to remain conscious until he finds an opening. Diaz’ arrogance ends up being his undoing as he gets into the mindset of seeing no possible way he could be defeated since he’s in control of the prison, much stronger than Oliver and has more resources at his disposal. It’s enough for Oliver to exploit that and deliver a killing blow. 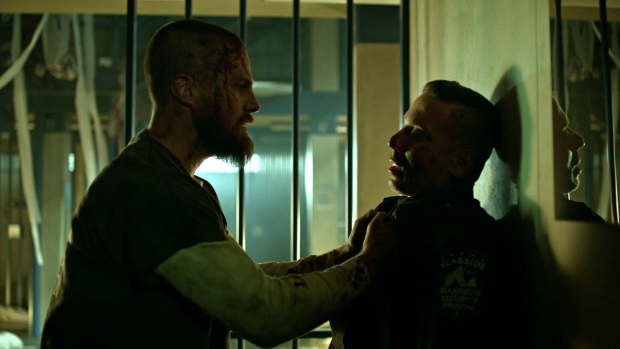 Your overconfidence is your weakness!

I can’t help but wonder what the point in Diaz having super strength was as it doesn’t really come to anything. He does outclass Oliver in terms of raw power but having him be physically stronger wasn’t necessary to set up Oliver taking a beating until he sees an opening that will let him defeat Diaz once and for all. It doesn’t make the episode worse though it makes earlier episodes feel a bit pointless if the strength wasn’t to come into play in any significant way. It could end up allowing Diaz to survive as it wasn’t clear if he actually died or not though it was satisfying to follow up his arrogant statement that he wouldn’t die in prison with Oliver stabbing him and leaving him for dead in his former prison cell.

The Oliver/Diaz antagonistic relationship is used really well in this episode. Diaz has been far from the strongest villain the show has had though he is definitely one of the most persistent and there’s no denying how much he has taken from Oliver as well as the people closest to him. The scene they share early on in the visiting room is brilliantly acted and sets up the situation nicely. It allows Diaz to brag about how much control he has and shows how easily he can get under Oliver’s skin. Stephen Amell’s performance is nothing short of excellent; he shows Oliver’s calm demeanour cracking gradually over the course of the scene before exploding at the point Diaz threatens Felicity and William. This is the point where Oliver decides that escaping in order to bring down Diaz is something he has to do even if it costs him his freedom. From here on he’s motivated by rage though deploys it in calculating and strategic ways.

Slabside Prison was used to great effect to increase the tension throughout the episode. The riot situation was impressively chaotic and there was enough going on to keep it interesting. Confining the episode to the prison without cutting to any of the characters on the outside was a great choice as it helped suck the viewer into Oliver’s sense of isolation and reinforces the idea that he has far fewer resources than Diaz. It all made for an effective swan song for this setting and felt like true closure was given to this arc. Oliver’s reunion with Felicity was perfectly played with the palpable sense of relief and the effortless chemistry between the actors. I do wonder what the show becomes now that Oliver is free but everyone knows that he’s the Green Arrow. I’m hoping that the crossover doesn’t undo the public knowing this as that will just feel cheap. 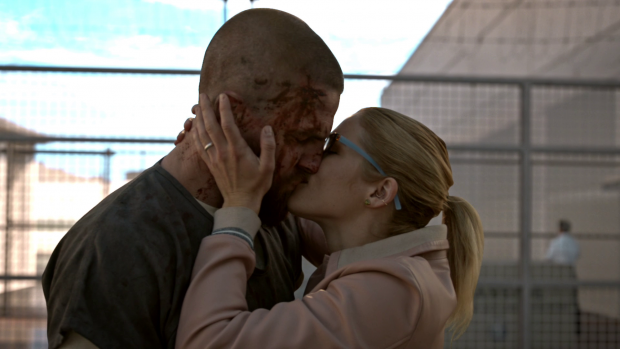 An excellent episode that brings the prison arc as well as Oliver’s long standing feud with Diaz to an epic conclusion. Isolating the entire episode within the prison was a great touch as it allows the viewer to feel the isolation along with Oliver and serves as a reminder that Diaz has more resources. Oliver and Ben’s team-up was brilliantly handled as it takes full advantage of the grown Ben has been given this season while setting up potential for Ben to meaningfully add to the show in the future. Having them work together creates some great opportunities for action sequences that make excellent use of their considerable skills. The highlight was the one take fight across multiple levels. Not all of the action was great because of sloppy editing but for the most part the episode delivers in that respect.

The Oliver/Diaz antagonistic relationship is used well from their early conversation to Oliver finally getting the upper hand and leaving him for dead in the cell that he once occupied. It’s satisfying and poetic with definitive closure on that chapter of Oliver’s life. Stanley as his other problem was nicely handled as well from the early scene where Oliver makes it clear that he doesn’t appreciate being manipulated to the later one where Oliver tries to manipulate Stanley to buy time for the drug to wear off. Brick’s death at the hands of Stanley before escaping was surprising enough and sets him up as at least a short term threat later on. Now that Oliver is out of prison I’m unsure what the show looks like with him free and the public knowing that he’s the Green Arrow.